‘I honestly feel bad for him having to put up with this s***’: Liverpool fans admit they feel sorry for Luis Diaz after their 4-1 thrashing by Napoli… as they slam their team’s performance as a ‘f****** shambles’

Jurgen Klopp’s side were blown away in Naples, conceding two first half penalties and going 4-0 down after 47 minutes.

Liverpool kept fighting, and Diaz hit back with a consolation goal, before going close with a header late on. 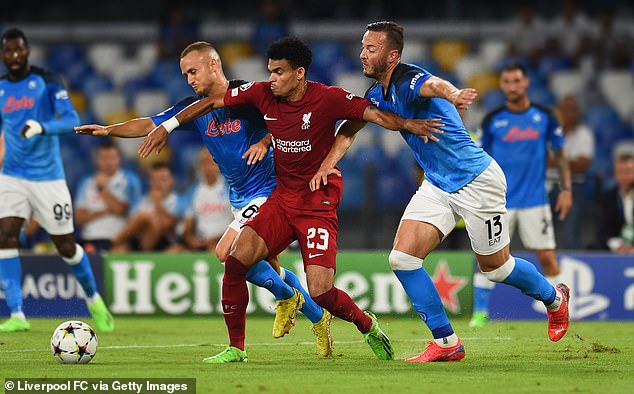 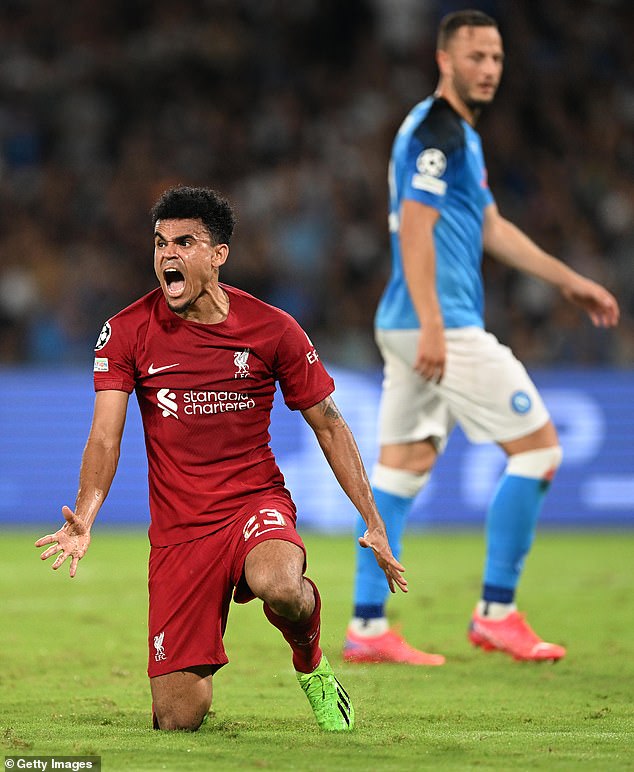 Diaz’s goal was typical of the forward, as he cut in from the left-hand-side and curled the ball into the far corner.

The Colombian was one of the few Reds players to come out of the game with any real credit after a dire night for the club.

After the game, Liverpool fans were quick to praise Diaz and felt that he had been let down by his teammates in Italy.

One said: ‘I honestly feel bad for Diaz for having to put up with this shit. He joins a big club, everyone doubts if he can keep up with Klopp’s style of play. Turns out he’s the only one even trying.’

Another echoed these thoughts: ‘Got to be maddening for him. Man dies out there every game while Trent et al walk about.’

In an underwhelming start to the season for Liverpool, Diaz has already scored four times and been one of the bright sparks for Klopp’s side.

Several Reds supporters believe that the Colombian is their main hope at the moment and expressed wider concern about the team.

One said: ‘Diaz is the epitome of how a player should behave on the pitch, but he’s surrounded by lethargy at the moment.’

Another Liverpool fan added: ‘I’m worried Diaz is going to drop down to the team’s level rather than the team coming up to his.’

This view was backed by someone else who said: ‘They need to look at Diaz. He’s constantly a***d, fighting for every ball. F*****g shameful.’

An extra fan highlighted his goal and said: ‘His goal was quite literally “ok I can’t count on anyone here”.’

Finally, one fan likened Diaz’s performance to that of an inspired new employee.

They said: ‘Watching Diaz is like when you start a new job fresh and motivated and end up having to motivate all your veteran coworkers to do their jobs who couldn’t give a shit anymore…’