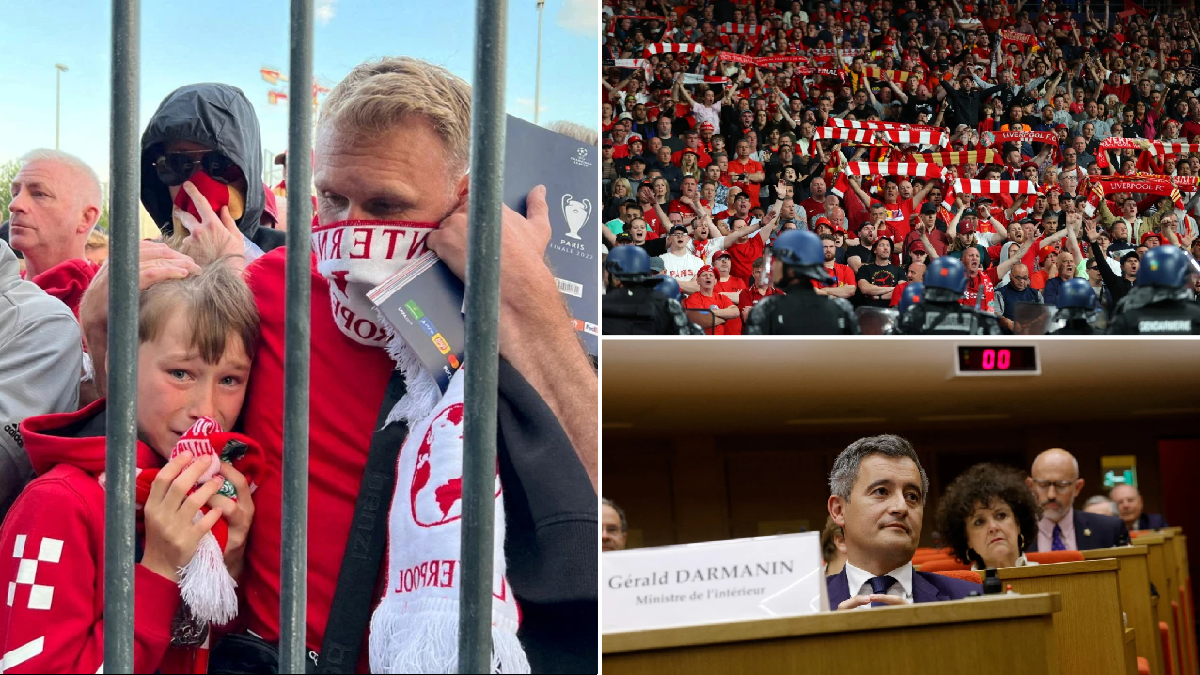 Liverpool supporters have been completely exonerated over the ‘fiasco’ at the UEFA Champions League in May, with the French government and authorities being blasted for their role in ‘multiple organisational failures’ in a findings published by the country’s senate.

Reds fans including women, children and the disabled were locked outside turnstiles in dangerous crushes at the Stade de France, tear gassed and hit with riot shields by riot police forces, and robbed by armed gangs of local youths as they attended European football’s showpiece event.

While French politicians responded in the immediate aftermath by blaming English fans for the chaos, a senate inquiry was set up in order to ascertain what went wrong and who was responsible, with politicians, the regional chief of police, UEFA, and supporter representatives all among those asked to provide testimony before senators in central Paris over the course of June.

Now, six weeks after a night which left some fans traumatised and others with serious physical injuries, Liverpool supporters have been absolved of any wrongdoing whatsoever, while the authorities have been found to be culpable due to a combination of an institutional ‘lack of co-ordination’ and policing ‘failures.’

In a press conference held to accompany the release of the report detailing the findings of its investigation on Wednesday, senate inquiry co-chairman Laurent Lafon said: ‘Liverpool supporters wanting to support their team are not responsible for what happened. The number of people around the stadium did not cause all the chaos. We know these fans travel en masse, that was foreseen.’

‘Every authority was acting on their own without co-operating, and that means nobody really felt they were responsible for anything. This was a chain of administrative errors. It is clear that the arguments put forward by the minister of the interior Gérald Darmanin, including that there was a massive ticket forgery, are not the cause of the problems at this match.’

‘We present our apologies and our condolences for what happened to Liverpool and Real Madrid fans. They are victims of what happened.’

The findings completely contradict the authorities’ version of events, which from the outset had been widely discredited in France and the United Kingdom. French minister of the interior Gérald Darmanin and sports minister Amélie Oudéa-Castéra repeatedly sought to blame fans for what went wrong in Saint-Denis, with Darmanin in particular being derided for his baseless claim that up to 40,000 Liverpool supporters with fake tickets tried to storm the stadium.

At no point during the investigation did the politicians provide a scrap of evidence supporting their claims, while vital CCTV footage from the stadium was “automatically deleted” before the senate or judiciary were given an opportunity to observe it. The arguments made by Darmanin, Oudéa-Castéra and chief of police Didier Lallement have now been found entirely false.

The senate findings reveal the investigation found that almost every single authority failed in the organisation of the match at one point or another. Particular errors cited include the failure of stewards and police to safely manage a pre-filter ticket check, a failure to respond to a train striker which forced a disproportionate number of fans to arrive at the stadium by one trajectory, and the stereotyping of fans based on false information.

The findings of the report vindicate supporters of both Liverpool and Real Madrid, who have spent the weeks since the final posting timestamped audio-visual evidence of what happened on social media. Now, attention will turn to the responded from the French government, with both the 2023 Rugby World Cup and 2024 Olympic Games due to be held at the same stadium.

Though the senate report makes clear who was responsible for the dangerous disorder at the Champions League final and makes a series of recommendations for future improvements, this kind of investigation is not legally binding France, meaning Emmanuel Macron’s government could potentially ignore it and refuse to acknowledge its failures.

Buffet, however, insists that the government must make a public comment: ‘It is desirable from our point of view for the government to make public comments on this report. That would be reassuring for everyone.’ Lafon agreed, adding: ‘It is unquestionable that the authorities must explain themselves. Comments from the prime minister or even the president of the republic are necessary.’

Lallement is set to leave his role as chief of police on 20 July, with his final weeks in office having seen him humiliated on an international scale over both his management of the final and his testimony at the senate, in which he admitted the 40,000 ticketless fans figure had ‘no scientific value’ and said he knew of ‘no other method’ of crowd management than using tear gas or charging through.

His role in the disorder is highlighted extensively in the report, with Buffet saying: ‘The pre-filter ticket check was untenable, and that situation caused the chaos and drama. That is a failure of the chief of police. The police were negligent on the petty crime around the stadium, and the failed pre-filter check meant criminals were able to enter around the stadium.’

Darmanin and Oudéa-Castéra have retained their positions in Macron’s new government following legislative elections in June. The ruling party lost its majority, with the damage done to France’s reputation internationally by the Stade de France chaos playing a role in Macron’s group losing seats.

For Lafon, Darmanin’s testimony in the senate was highly problematic. ‘It is unfair to have sought to blame Liverpool supporters for the disturbances as the minister of the interior [Gérald Darmanin] has done in order to deflect attention from the state’s inability to adequately manage the crowd,’ the senator said. ‘This was the fault of the [French] state. If we have a yellow card to give out, it is for the state. That’s the chief of police, the train operators, and more, who have individually and collectively failed.’

UEFA, meanwhile, has appointed an independent panel of experts led by Portuguese politician and academic Dr. Tiago Rodrigues to conduct its own investigation into what happened. The panel is expected to deliver preliminary conclusion in September and a final comprehensive report in November.