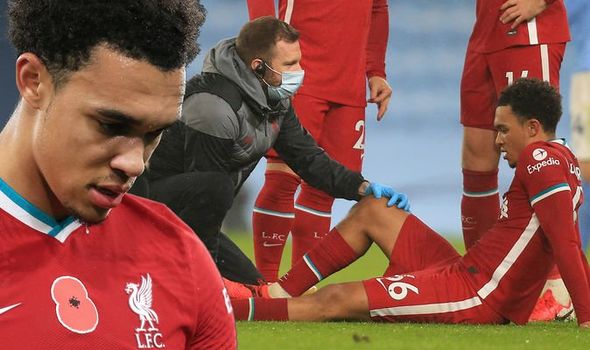 Liverpool right-back Trent Alexander-Arnold is set to spend up to four weeks out injured with the problem he sustained against Manchester City on Sunday. Alexander-Arnold pulled up in the second half of the Reds’ 1-1 Premier League draw and had to be replaced by James Milner.

Jurgen Klopp said post-match at City: “Trent will be out for England, that is clear. What he has, we don’t know, but he cannot play for England.

“He will not be the last and not the only one who Gareth [Southgate] will miss for this international break. He will have a scan tomorrow and then we will see.”

And according to The Times, the result of the player’s scan leaves him facing a month on the sidelines.

If he is out for the full four weeks, the England defender will miss league matches with Leicester, Brighton and Wolves.

Alexander-Arnold would also then be absent for the final three Champions League matches of the group stage campaign at home to Atalanta and Ajax and away at Midtjylland.

Liverpool will hope to have the 22-year-old PFA Players’ Young Player of the Year back for the top-flight visit of Fulham on December 12.

The Premier League champions head into the international break third and one point behind league leaders Leicester after eight games.

In addition to missing the Reds’ upcoming games, Alexander-Arnold will sit on the sidelines for England’s three matches over the next two weeks.

The Three Lions face the Republic of Ireland in a friendly before Nations League showdowns with Belgium and Iceland.

Liverpool have had to contend with a multitude of injury issues early into the season but will be optimistic of having Thiago Alcantara and Fabinho available against Leicester a week on Saturday.

The Foxes, managed by former Liverpool boss Brendan Rodgers, have won six and lost two of their first eight matches to top the table.

Milner is likely to stand in for Alexander-Arnold in some matches while Wales international Neco Williams is another back-up.

Defensive midfielder Fabinho, who has played at centre-back in the absence of Virgil van Dijk, can also play at right-back, where he used to be deployed for old club Monaco.

Any of the trio will struggle to replace Alexander-Arnold’s attacking output, despite his low-key start to the current league campaign by his standards.

The Liverpool academy graduate has managed five goals and 25 assists in the Premier League over the past two seasons.