Record-equalling Liverpool moved to within four wins of a first title in 30 years but they were made to prove their credentials in a 3-2 win over struggling West Ham United.

A 21st successive league victory at Anfield matched the Reds’ own top-flight record, set in 1972, while an 18th consecutive win drew them level with Manchester City’s Premier League landmark set in 2017.

Jurgen Klopp’s side – leading through Georginio Wijnaldum’s early header – found themselves 2-1 down after Issa Diop and Pablo Fornals threatened to pull off the shock of the season for the league’s 18th-placed team by ending the Reds’ 417-day unbeaten league run.

However, an embarrassing goalkeeping howler in front of the Kop from Lukasz Fabianski allowed Mohamed Salah to become the club’s joint-fourth highest Premier League goalscorer alongside Luis Suarez with 69.

Sadio Mane then ensured David Moyes endured another game without a win at Anfield, leaving the Hammers mired in a relegation battle after just two points from their last seven matches. Check out our ratings below: 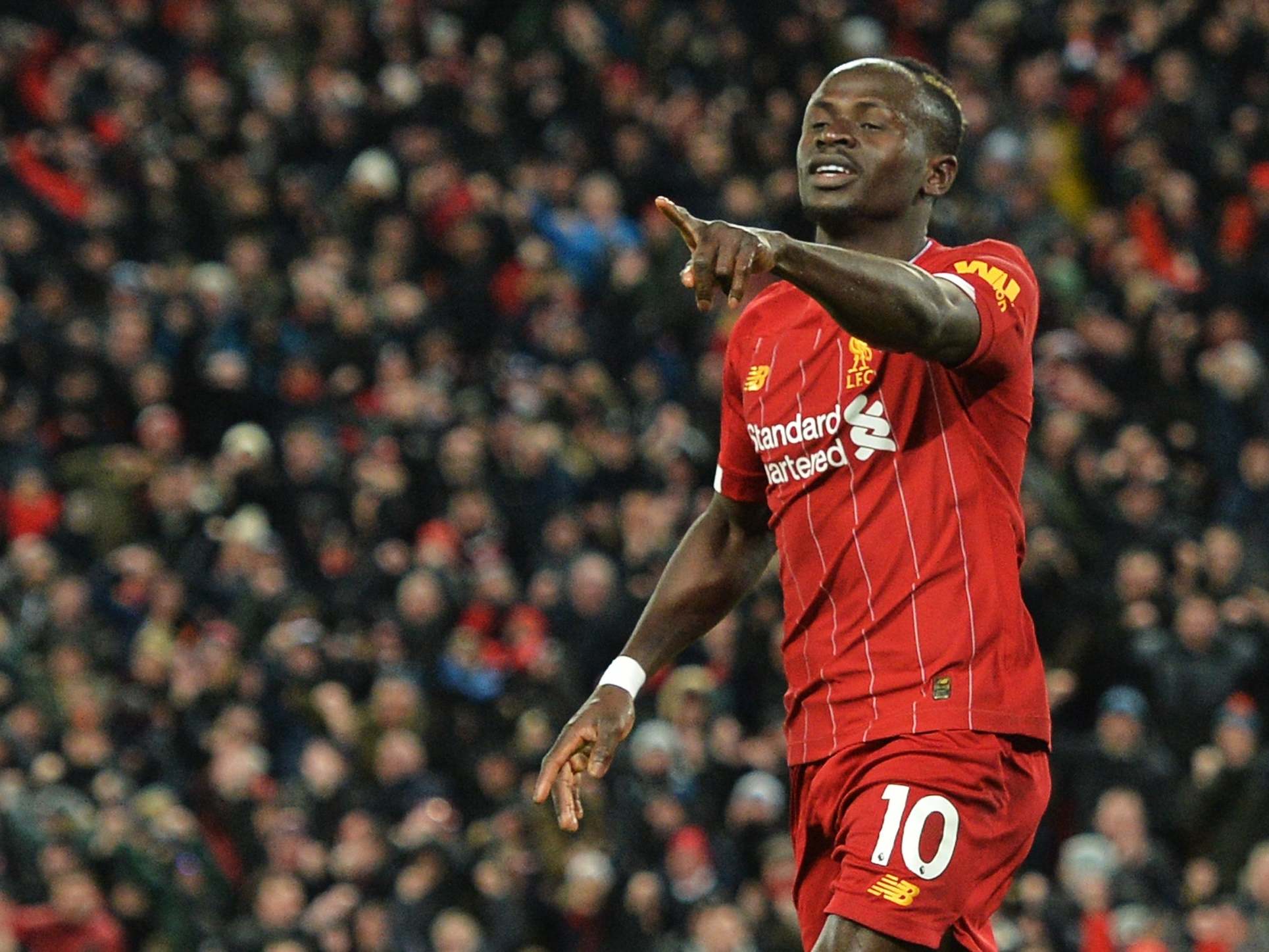 Alisson – 6: Should have done better to save Diop’s first-half equaliser at his near post, but was typically calm otherwise and made a vital save to deny Jarrod Bowen in the final minutes.

Alexander-Arnold – 8: Delivered the cross for Wijnaldum’s opening header and again for Mane’s winner. A relentless threat down the right flank, assisting two of Liverpool’s three goals.

Virgil van Dijk – 6: A talisman in defence, at fault for neither goal, and saw his first-half header crash against the crossbar. Was almost caught out by Bowen in the final stages.

Joe Gomez – 5: Lost Diop at the corner for West Ham’s opener but was otherwise sturdy alongside Van Dijk at the heart of defence.

Fabinho – 6: Dictated the tempo as an anchor at the base of midfield and broke up play well as the game descended into a frantic final quarter.

Wijnaldum – 7: Shone in Henderson’s absence as the star of Liverpool’s midfield, attempted more passes than any outfield player, and bagged the opening goal.

Keita – 5: Failed to take his chance having been given the nod ahead of Oxlade-Chamberlain despite some encouraging bursts forward.

Salah – 6: Forced Fabianski into a fine save in the first half but squandered possession on occasion and seemed out of sorts. Scored the equaliser through Fabianski’s error.

Firmino – 5: His Anfield drought goes but didn’t miss any gaping chances and worked hard to drop deep and support the midfield.

Mane – 7: Took a while to cast his influence on the game but provided an everpresent danger by its end and was on hand to tap in the winner. 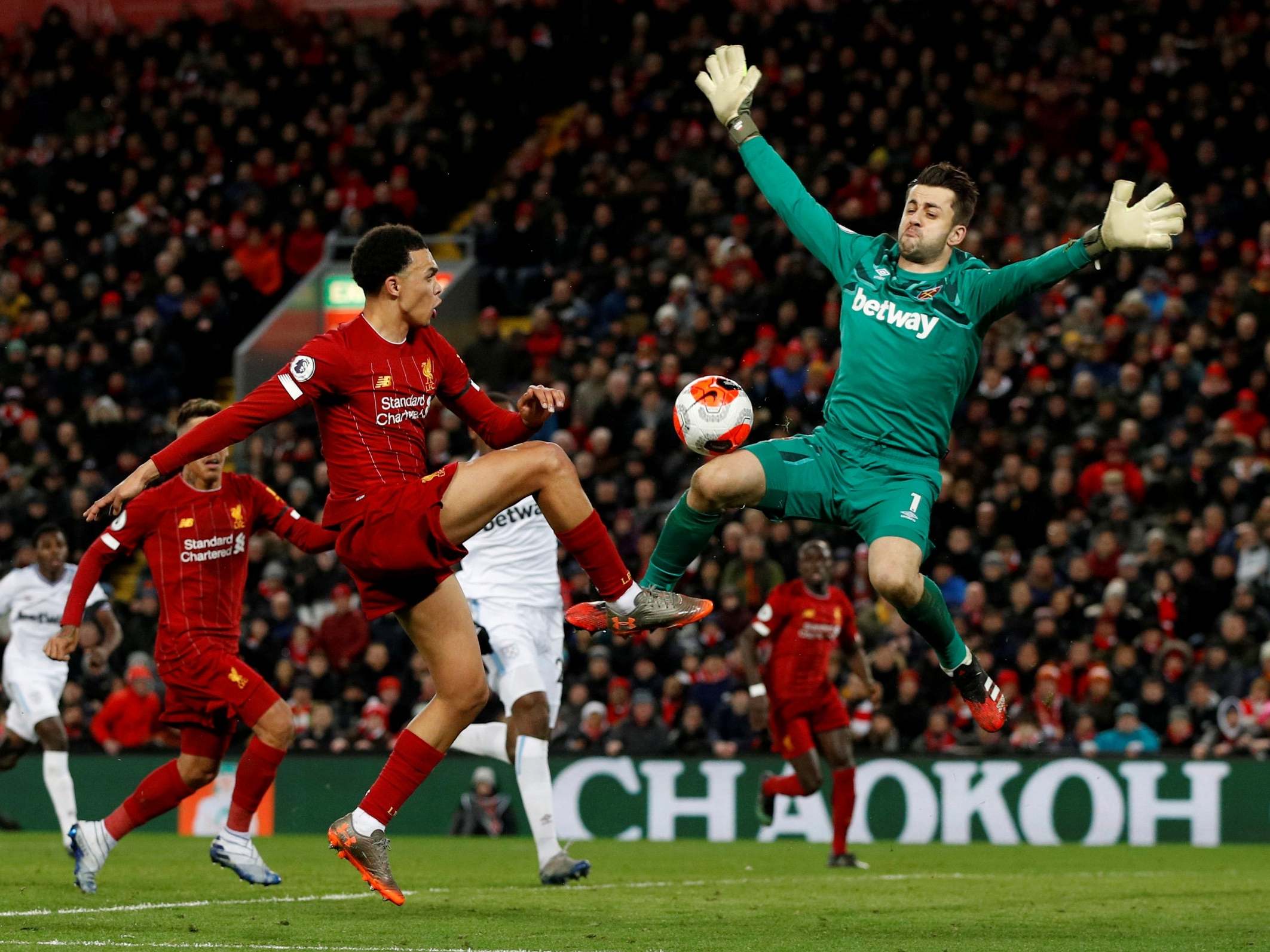 Fabianski – 3: Was at fault for two – arguably all three – of Liverpool’s goals, first failing to deal with Wijnaldum’s before suffering a complete howler when he allowed Salah’s tame shot to squirm through his legs for the equaliser.

Cresswell – 6: Struggled to deal with Alexander-Arnold on the overlap as the game descended into Liverpool’s all-out pattern of attack, but was impressive in the first half.

Ogbonna – 7: Despite Liverpool’s torrent of attacks, centre-back did excellently to nullify Salah and Firmino in the box, with Fabianski to blame for the goals his side conceded.

Diop – 7: Scored the equaliser, almost added a second, and was impressive in defence amid a relentless barrage of Liverpool attacks.

Soucek – 6: Made an immediate impression in the early stages, particularly in the air, but was withdrawn at half time after picking up a knock.

Rice – 7: Was largely overrun in midfield, with Liverpool dominating possession, but passing was always pinpoint and continuously helped break up the play.

Noble – 6: The spine of the team, constantly corraling his teammates and diving into tackles as Liverpool overwhelmed the midfield.

Anderson – 5: Excited in flashes but struggled to have any significant impact on the game.

Antonio – 7: Used his pace to keep Van Dijk and Gomez on their toes, surged forwards as the game opened up and helped track back brilliantly in the latter stages, but lacked a clinical threat on goal.