Arsenal could finally land Philippe Coutinho from Barcelona – because of a £20million clause in the former Liverpool midfielder’s contract. Mikel Arteta’s side were heavily linked with bringing Coutinho back to the Premier League in last summer’s transfer window, but no move materialised.

The Gunners are expected to be in the market for an attacking midfielder again this summer, depending on whether Martin Odegaard’s loan move from Real Madrid is made permanent.

And it has emerged they could land Coutinho on the cheap, with Barcelona considering selling the 28-year-old for much less than the £142million they paid to sign him from Liverpool in 2018.

That is because they would have to pay Jurgen Klopp’s side another £20m if Coutinho reaches 100 appearances for the Nou Camp side.

For some time it looked as though that was unlikely to happen, with the midfielder loaned out to Bayern Munich last season after failing to replicate his best form at Barcelona. 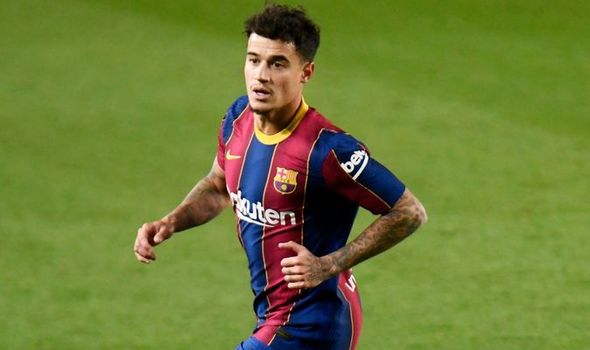 But Bayern opted not to make his move permanent, and he was given a fresh chance with the La Liga giants after Ronald Koeman took charge in Catalonia.

Coutinho has this season reached 90 appearances for Barcelona – but his progress was stalled by an injury which means he has not played at all in 2021.

With Barcelona out of the Champions League and having just 11 more games remaining of their La Liga campaign, they could now opt to sell the Brazilian this summer rather than have to take their spending on him past the £160m mark.

According to Spanish outlet Sport, Barcelona president Joan Laporta is ready to sell both Coutinho and Antoine Griezmann in order to fiund a move for Borussia Dortmund striker Erling Haaland.

But any move for Coutinho from the Gunners would depend on whether they sign Odegaard permanently.

Arteta is now starting to build his frontline around Odegaard, who is the creative spark to link all of the play together.

The Spaniard is impressed with Odegaard’s attitude and ability and would love to make the move permanent at the end of the campaign.

But as of yet, Real Madrid are yet to make a decision on his future and will reassess the picture in a few months’ time.