Liverpool should be awarded points if game postponed due to fan protests, says Jurgen Klopp

Liverpool’s miserable start to the season continued against Manchester United on Monday night as Erik ten Hag’s side ran out convincing 2-1 winners at Old Trafford. Jurgen Klopp’s Reds were outclassed and only started applying pressure in the final 10 minutes, with few positives to take for the visiting fans. With the dust settling and the three points staying in Manchester, Express Sport takes you through Liverpool’s four worst players on the night…

The England right-back began the game clumsily by giving the ball away and hacking down Marcus Rashford, and the rest of his performance continued much the same. Liverpool hero Jamie Carragher said, during the first half, that it was the worst he had seen Alexander-Arnold play in a Liverpool shirt.

The Red Devils targeted the space out wide as Klopp’s men appeared rattled by the raucous atmosphere inside Old Trafford. Numerous slack passes and a yellow card within 24 minutes were uncharacteristic for Alexander-Arnold, who is normally one of the Reds’ key men. 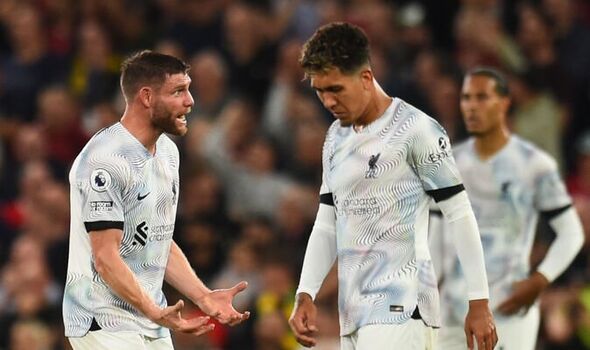 The Premier League veteran, famed for his work ethic and versatility, turns 37 this season and he looked every bit of his age on Monday night. Slow and laboured on the ball, Milner struggled to make a positive impact in his relatively advanced midfield position.

He also cut a frustrated figure, arguing relentlessly with Virgil van Dijk as Liverpool struggled to get a foothold in the game. Klopp’s side lacked creativity with Harvey Elliott unable to make enough happen on his own as the sole forward-thinking option in midfield.

While the likes of Milner and Alexander-Arnold can be criticised for their wayward performances, they were at least asked questions by a free-flowing Man Utd. Firmino, meanwhile, was tasked with providing moments of magic at the opposite end of the pitch and he simply couldn’t make his mark on the game.

The Brazilian was kept largely under wraps by Lisandro Martinez and Raphael Varane, despite the Red Devils’ apparent vulnerability based on last week’s showing against Brentford. Salah was similarly lacklustre for most of the game, but popped up with a header late on to make United sweat.

While there were a few positive early touches from the Dutchman, namely an eye-catching crossfield pass to Salah and a crucial tackle on Marcus Rashford, he still has to take plenty of blame for Liverpool’s calamitous defensive display.

Van Dijk was sucked into midfield early on which gave Anthony Elanga the space to run through on goal, and Milner gave him an earful for his role in Jadon Sancho’s opener. The centre-back, normally so reliable, stood his ground instead of closing down the winger, who had time and space to pick his spot in the bottom corner.