On October 15 2010, the ownership of Liverpool Football Club changed hands.

On their way out were American owners Tom Hicks and George Gillett, with supporters organising protest marches against them as the club’s debts began to pile up.

November 3 2010 – Damien Comolli is appointed director of football strategy, though he would only last 18 months

January 31 2011 – The club’s first transfer window under the new owners is an eye-catching one: Fernando Torres moves to Chelsea for £50m, with Luis Suarez and Andy Carroll arriving

February 26 2012 – Liverpool win the first trophy of the FSG era, beating Cardiff on penalties at Wembley to lift the League Cup

June 1 2012 – Shortly after Dalglish is sacked, Brendan Rodgers is unveiled as the man to lead Liverpool

May 2014 – Liverpool come tantalisingly close to winning the title, prompting a new three-year deal for Rodgers

October 2015 – Rodgers is sacked after a poor end to the previous campaign runs into the following one. Jurgen Klopp, one of the most sought-after managers in Europe, is appointed

May 2019 – Liverpool lose just one Premier League game and amass 97 points but finish second to Manchester City. They do however win the Champions League, beating Tottenham 2-0

June 2020 – After a delay due to the coronavirus outbreak, Liverpool win the Premier League, their first top-flight title since 1990

It brought to an end a period in the history of the club described as ‘harrowing’ by one party, with the sale descending into a bitter courtroom battle in London’s High Court and the 160th District Court in Dallas, Texas.

Ian Ayre: “The banks, RBS in particular and others, were ready to call default on the loans that the owners had.

“Eventually the banks came in to myself and the two other independent directors Christian (Purslow) and (Sir) Martin Broughton and made it clear if we didn’t work with them to find a buyer then they would foreclose and that would have meant administration.

“How serious that threat was it is hard to know but they certainly had the power to do that and it made it difficult for everyone involved.” 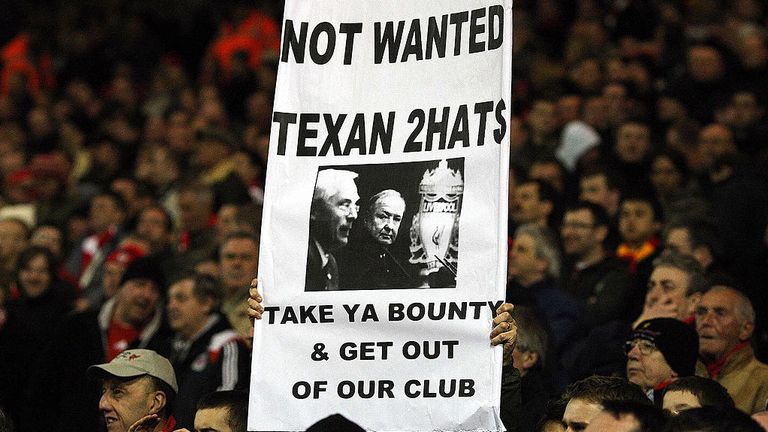 Joe Blott: “They were difficult and dark times for Liverpool fans. I was on the ground then rather than being in the (Spirit of Shankly) steering group and I’ve got massive admiration for the men and women who took the challenge to Hicks and Gillett and organised the marches and leaflet drops.

“It showed that football fans can’t be taken for granted and fortunately they’re not so much now. I can’t give enough praise to what my predecessors did because they brought sense to Liverpool Football Club.

“When supporters get together they can actually be a force for good. It hadn’t been at that level before. Manchester United did a lot of work against the Glazers and set up an alternative club so there were certain precedents but this was the biggest because it was nearly the end of Liverpool.

“It was a seminal moment in football history.” 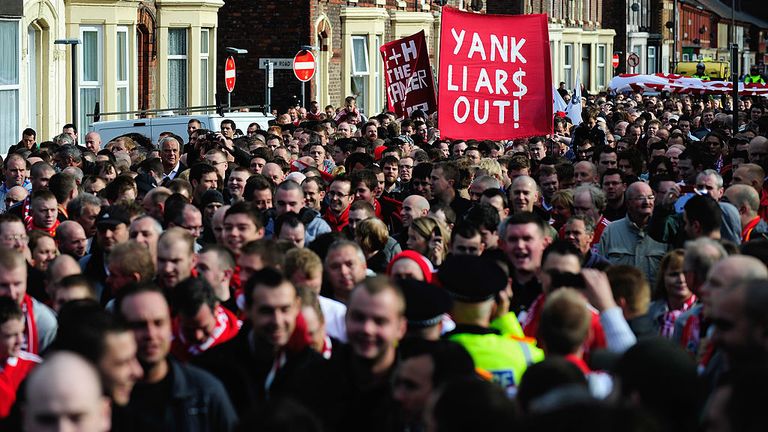 Ian Ayre: “We all had a pretty difficult time personally – we were all sued individually for a billion dollars by the owners. It was harrowing and difficult but we all at least felt we were doing the right thing.

“In their own right they were successful businessmen but this was a crown jewel of a football club which is so important to the city and people around the world.

“Once you start messing with that and start causing issues that could damage you, you get in really hot water.

“It wasn’t all bad but it was certainly very ugly at the end and they were fighting for the money they would lose so it was always going to be a bit of a scrap. Let’s say the best team won.” Alan Myers: “I’d always got on really well with Tom Hicks, even though I had suggested he do an early interview with me by the roaring fire at his house, for which he got some stick for making himself look like this big rich man.

“So I went to Dallas to get an interview with him at the time of the court case and we had to keep waiting to do it because the case was going on every day.

“There was always a delay and then on the Friday the court was convened for an emergency hearing at 7am. We managed to get in there and there were four Liverpool fans in replica shirts with the big Texan hats and they tried to get a chant going about Tom Hicks, a very famous chant that was being sung at the time.

“The judge quickly put a stop to that and quietened them down and then he said about how there was a dispute involving K-O-P Holdings which showed you the distance there was because obviously it should just have been Kop Holdings.

“Hicks and (George) Gillett were trying to stop the deal but the judge didn’t allow them and it went through.” 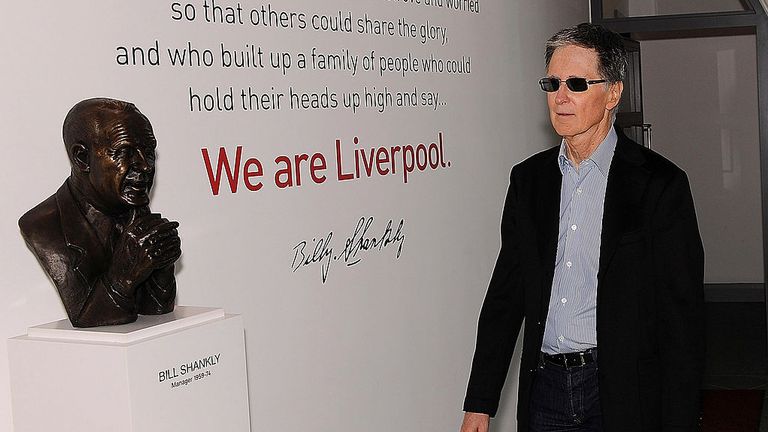 Ian Ayre: “We were all probably more aware than anyone else just how important the selection of the new buyer was in terms of all of the things which had just gone before.

“There were some very good organisations like Fenway and some not so pretty organisations on the face of it so it became really important we asked all the right questions of the intent of those people.

“It was one thing to find a buyer who would take on the debt of the club but it is also important to have people who understood it. That was a fraught situation.

“(FSG) are good people who know their stuff and are seasoned sports owners and had a great track record not just in sports and for me they seemed to be an ideal owner for Liverpool.” Alan Myers: “I called Tom Hicks after the court case and asked if he would do an interview and he said he wasn’t in the mood for it. I was devastated because we’d been there a week and I was going to come back empty-handed.

“But he calmed down and called me back to say he would do an interview – that was the famous interview where he referred to the Liverpool fans as ‘internet terrorists’.

“Even then it was clear he was still very passionate about the club but because of the financial crash there was no way they could continue.

“After we finished the interview you could tell he was really devastated to have lost the club. He really wanted to do well with the club and without the crash he’d probably still be the owner today.” 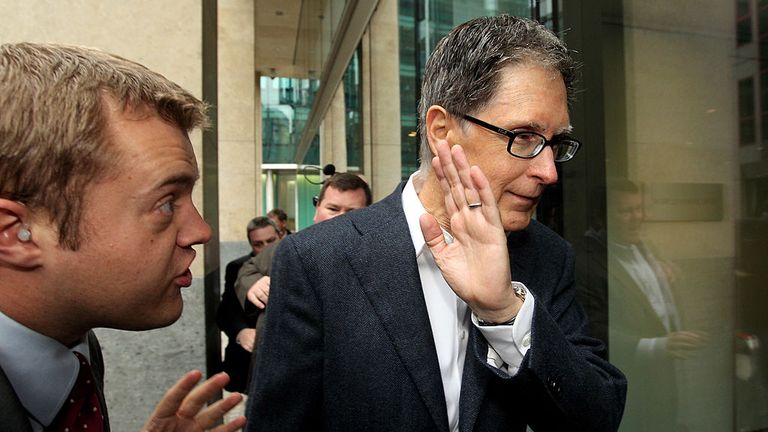 Bryan Swanson: “There was a sense of covering a historic moment in Liverpool’s rich history – the media scrum outside the High Court in London was one of the biggest and most chaotic I’ve ever been involved in.

“After getting off my knees on the pavement outside court, my arm ached after it was stretched out for so long to hold the microphone towards Martin Broughton, Ian Ayre and Christian Purslow. It was extraordinary as TV crews jostled with photographers, fans and bemused members of the public watching from the street.

“We received a tip-off that the takeover was being completed at a law firm called Slaughter and May, about two miles away. It was outside those law offices where a photographer captured me trying to ‘doorstep’ John W Henry on his way in as he firmly, but politely, put his hand up to me. Later on, it was all smiles as he stood alongside club chiefs and answered all our questions.

“In journalism, you live for moments of covering these big unpredictable stories and that takeover story had it all.”

Joe Blott: “The engagement is much more positive now – people who work at the club now are focused on engaging with us now and we hold the club to account.

“You can’t knock their achievement in terms of success on the pitch. Anyone who can bring Jurgen Klopp to our club has to be praised because he’s the next best thing to Bill Shankly in terms of his philosophy, his values and his principles.”

Tags: by, f, Liverpool’s, takeover
You may also like
Latest Posts

Zozo Championship: Justin Thomas leads Jon Rahm by one after third round

NFL EVP Troy Vincent emphasizes COVID protocols as rescheduling becomes more difficult
Recent Posts
This website uses cookies to improve your user experience and to provide you with advertisements that are relevant to your interests. By continuing to browse the site you are agreeing to our use of cookies.Ok