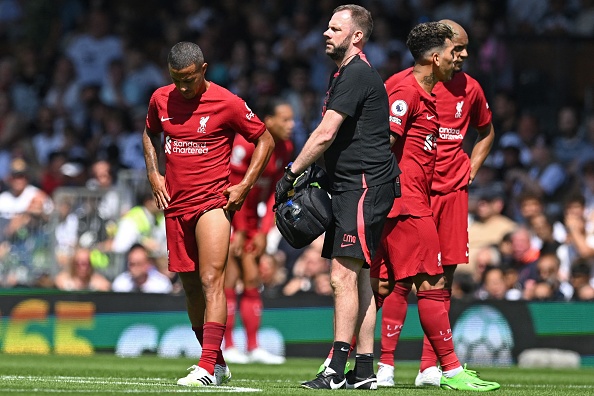 Liverpool midfielder Thiago Alcantara will reportedly be out for the next six weeks as a result of the hamstring injury he picked up on the opening weekend of the season.

Thiago limped off in the 50th minute of Liverpool’s 2-2 draw with Fulham at Craven Cottage on Saturday, as the Reds kicked-off their 2022/23 Premier League campaign.

According to The Athletic, the 31-year-old will not be back in action until mid-September, meaning he is likely to miss the league fixtures against Crystal Palace, Bournemouth, Newcastle and Wolves, as well as the trips to fierce rivals Manchester United and Everton.

He may however recover in time for what could be a crucial clash at Chelsea, the last game before the September international break.

An important player in Jurgen Klopp’s side, Thiago has struggled with many injuries and fitness issues since his move to Anfield from Bayern Munich in 2020, starting just 37 out of a possible 76 Premier League games for Liverpool.

The news further adds to Klopp’s midfield problems, as while Naby Keita is set to recover from illness ahead of Monday’s game against Palace, Curtis Jones remains out with a calf issue and Alex Oxlade-Chamberlain is set for another lengthy spell on the side-lines after picking up a hamstring injury in pre-season.

However, the German manager insisted that the club would not be panic buying a new player before the transfer window closes.

‘A transfer must make sense now and in the long-term,’ Klopp said after the Fulham match.

‘This isn’t a good situation; I don’t like it at all. We have to see how we react on that, but for sure not panic.’

Dortmund’s Jude Bellingham has often been linked with a move to Anfield, but Klopp has previously reiterated that he would rather wait for the perfect midfielder to become available next year rather than panic-buy an inferior option this summer.