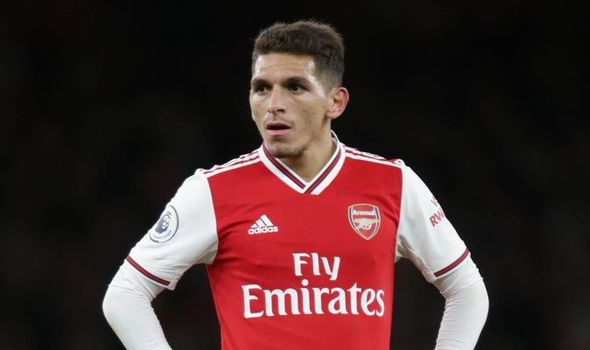 Lucas Torreira has offered an update on his recovery from his ankle injury as he posted to Instagram looking in good spirits while wearing a protective boot on his right foot. The Arsenal midfielder has been sidelined since an FA Cup fifth-round win over Portsmouth at Fratton Park earlier this month.

Torreira was forced off on a stretcher after just 16 minutes of the 2-0 win with it later emerging that he had fractured his right ankle.

He was shown limping away from the stadium post-match in crutches and was still on them while watching the Premier League win over West Ham a few days later.

Arsenal soon declared that Torreira would be sidelined for up to 10 weeks.

That put him at risk of missing the rest of the season, although the coronavirus-enforced Premier League break means he could return to play again if the campaign is resumed. 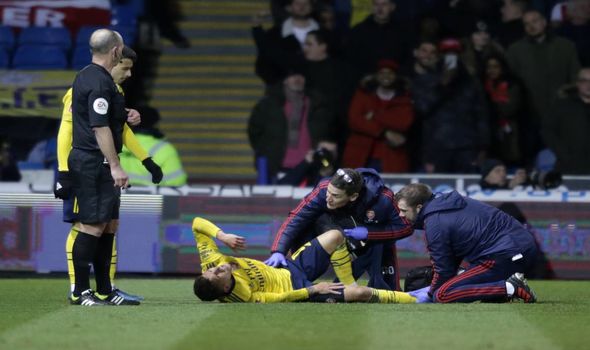 And addressing supporters on social media on Monday night, the 24-year-old uploaded a picture of himself wearing the boot while holding a ball up in one hand alongside some gym equipment.

Torreira wrote: “Verified #IStayAtHome. Working and messing with recovery. COVID-19 – All together, we move forward #LT11.”

The post was written in Spanish, with team-mate Alexandre Lacazette joking in the replies: “In English please.”

Torreira and his Arsenal team-mates are of course in individual periods of self-isolation after manager Mikel Arteta tested positive for COVID-19. 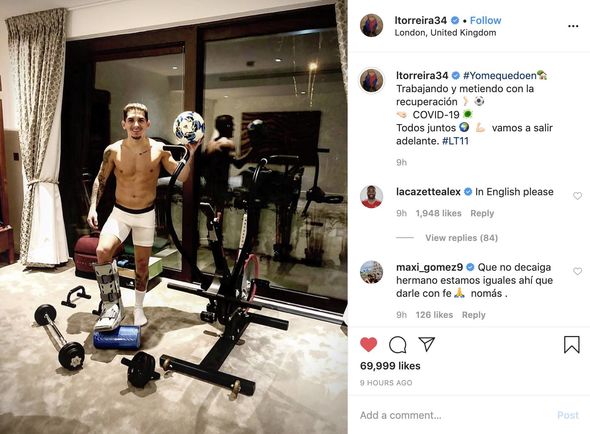 The worldwide pandemic has officially infected over 180,000 people and claimed the lives of more than 7,000, though the real number of cases could be much higher with some countries no longer testing the public for the virus.

The Premier League has been postponed until April 4 and Arsenal have shut down their London Colney training ground and told players to stay in their homes for a period of two weeks, which began on March 10.

And Torreira told Uruguayan outlet Radio Sport 890 recently: “The truth is that we didn’t expect this virus to reach the club, the locker room.

“Mikel Arteta is better. He was able to communicate with us and he is improving.

“In recent days, many cases of coronavirus were discovered in London and people were nervous. In some supermarkets, you can no longer find toilet paper or gel alcohol.”

While Torreira cannot make the most of Arsenal’s in-house facilities to recover from injury, his Instagram post showed he has some equipment at his house.

The Gunners have sought to ensure all of their players have the sufficient set-ups in their home gyms to maintain optimum condition. 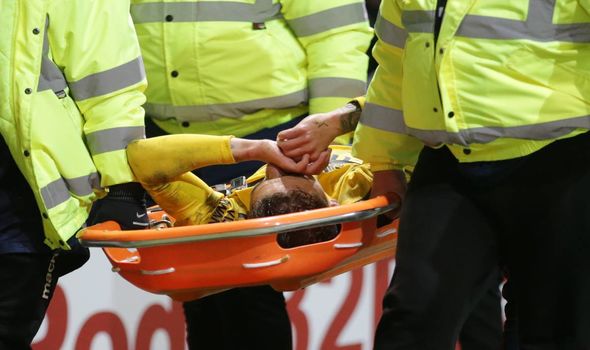 “I’m quarantined at home. Working on my own in recovery,” he added.

“I had to buy some devices and the club will collaborate with everyone so that we can continue working individually in our homes.

“I’m happy because the exams were good. I’m still wearing the orthopaedic boot. In eight or 10 weeks I will be able to work normally.”

Arsenal are currently scheduled to return to action against Norwich at the Emirates on April (3pm).

But there is serious doubt as to whether that fixture will go ahead, with Premier League clubs to meet later this week to discuss the future of the 2019-20 campaign.