Melbourne City survived a late Macarthur revival in a 1-1 draw in Campbelltown on Saturday night that keeps them on top of the A-League ladder – at least until Adelaide play on Sunday, when they can overhaul the Victorians with a win over Wellington.

City had defeated Macarthur easily in Melbourne the first time they met this season, controlling the game, and particularly the first half, in a 3-0 victory. 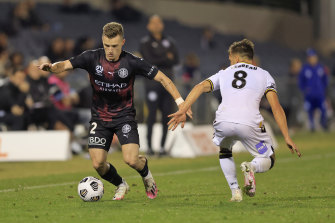 Saturday night’s encounter was different, at least in the opening period, as a more energised Macarthur tried to match it in physical contests with the league leaders.

City could have taken an early lead through Craig Noone, when the English winger was played through by Connor Metcalfe only to see his shot blocked by Adam Federici in the Macarthur goal.

City defender Curtis Good then had an excellent chance to make the breakthrough, getting his head on the end of an Adrian Luna cross from a short corner only to see it drift over the bar.

But it was the hosts who should have got their noses in front when the Bulls ex English Premier League striker Matt Derbyshire was played through from a Lachlan Rose cross only to see his shot strike the post. 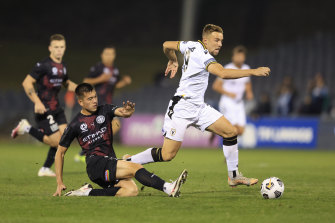 Then Jamie Maclaren, whose tally of 19 has him well on the way to a second successive golden boot, should have added to his tally but he spurned an excellent chance after a good build-up when Adrian Luna headed into his path from a Metcalfe pass. Maclaren was through on goal and in the form he is in now would have been odds on to score, but he could only fire wide.

City thought they had taken the lead shortly after the restart when Macarthur’s former Socceroo captain Mark Milligan drove a clearance past Federici who then saved with his feet from Metcalfe.

But City were not to be denied, and just before the hour mark took the lead with a wonderfully worked goal, Scott Jamieson and Maclaren linking up to find Noone, whose cross was met first time on the volley by Metcalfe.

Maclaren threw caution to the win late as they chased a leveller, and substitute Michael Ruhs deliver 13 minutes from time, outmuscling Kerrin Stokes to fire past Tom Glover.

Tags: back, fight, force, Macarthur, to
You may also like
Latest Posts