Pep Guardiola insists he did what was best for the team when quizzed on his Champions League final line up. Manchester City fell short in Porto against Chelsea after Kai Havertz’s winner saw them record a famous night at the Estadio do Dragao.

Thomas Tuchel appears to have Guardiola’s number, having now beat him three times since arriving at Stamford Bridge.

Guardiola has often faced scrutiny on the European stage with City for tinkering with his team in the crunch matches.

Frustrating defeats to Monaco, Liverpool and Lyon in the past have stopped his side from conquering the game on the continental stage.

Tonight Guardiola left out a defensive midfielder and instead brought in an extra attacker in Raheem Sterling. 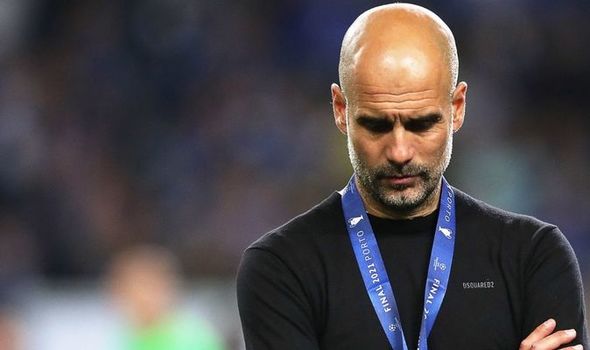 Not only has Sterling been out of form but City’s captain Fernandinho is the club’s most-experienced player who has been central to their success in recent times.

Rodri was also absent and named on the bench and the decision appeared to cost City.

Yet Guardiola insisted he made what he felt was the right call.

“I did what was best for the team,” he said to BT Sport’s Des Kelly when quizzed on the lack of a holding midfielder.