Manchester City manager Pep Guardiola was spotted chatting to Barcelona boss Quique Setien, as well as his right-hand man, Eder Sarabia, following the 2-1 Champions League win at Real Madrid. Setien was at the Santiago Bernabeu watching the game, ahead of El Clasico this weekend.

The Barcelona boss spent the night at the EuroStars Towers hotel in Madrid on Wednesday night – which is where the Barcelona squad usually stays when they play in the Spanish capital.

It just so happens that City were spending the night at the hotel too, following their win against Real Madrid.

Following City’s win, Setien and Sarabia caught up with Guardiola, to congratulate him on the terrific performance, according to Mundo Deportivo.

Guardiola also provided Setien with some advice over how to beat Los Blancos, and wished them luck for the weekend’s match. 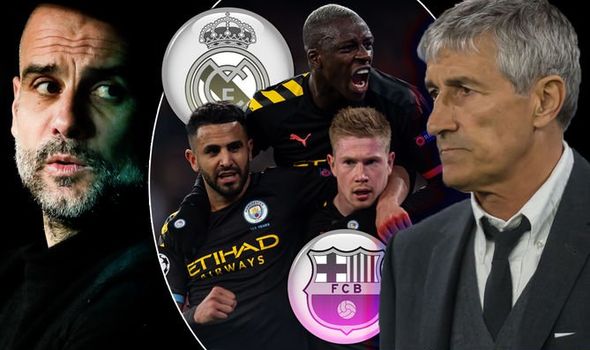 Setien headed back to Barcelona on Thursday, to continue his side’s preparation for a crucial match against Real Madrid.

The two La Liga giants face off at the Bernabeu, knowing that a place at the top of the table is up for grabs.

Neither side have been at their very best this season, but Barcelona are currently two points ahead of their fierce rivals.

Guardiola was speaking to Setien following the Citizens’ sensational comeback against Zinedine Zidane’s side.

City went a goal down after half-time, stemming from a series of defensive mistakes.

But, Gabriel Jesus equalised for City midway through the half, before Kevin de Bruyne scored the winning goal from the penalty spot.

Guardiola admitted that it was a great win for his team, after years of Champions League disappointment. 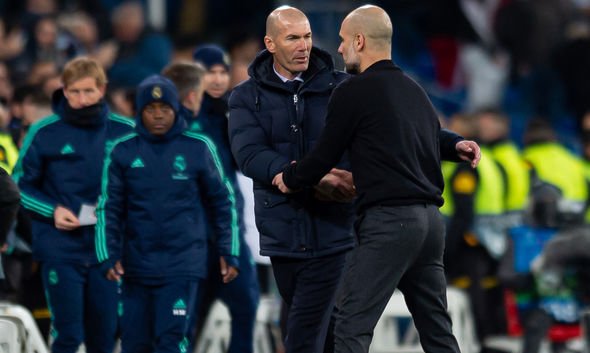 “To win at the Bernabeu is a great satisfaction for us,” said Guardiola.

“It is amazing to be able to win here for us because we are not used to doing these things.

“We hope it will help us in the future to believe in ourselves and to be able to go to any stadium and play the way we did against Real.”

But, the boss warned his players against complacency ahead of the second leg, reminding them that there’s still 90 minutes to play.

“If one team can overcome this situation, for experience, for everything, it is this club. But, of course, it is a good result.

“I am so proud of course but it is just the first step, we have another game, it is not over.”

City host Real Madrid in the second leg of the tie on Tuesday March 17.