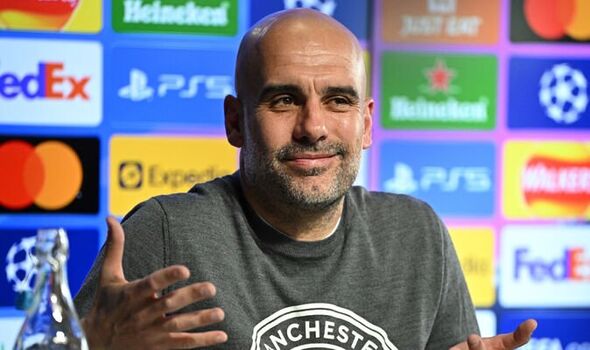 Manchester City boss Pep Guardiola offered an awkward response to a reporter who asked him whether Gabriel Jesus had become the No 9 he had been missing all season. Jesus has hit a purple patch of form in recent weeks and has found the back of the net six times in his last three matches.

City allowed blockbuster striker Sergio Aguero to move on last summer as the former Argentina international joined Barcelona before being forced to retire due to a heart problem. And the Citizens then missed out on landing Harry Kane from Tottenham as they were left without a recognised centre forward.

Jesus, who had been expected to become Aguero’s natural successor when he joined City from Palmeiras in 2017, has occupied a role on the wing for much of the campaign. But he has been prolific since being asked to lead the line in recent weeks.

And one reporter wondered whether Jesus had solved an issue for Guardiola. “Can I ask you about Jesus’ confidence – he’s scored in the last three [games], six goals,” said the reporter ahead of the second leg of City’s Champions League semi-final showdown with Real Madrid. “He’s become that No 9 you’ve kind of missed all season?”

A perplexed Guardiola paused momentarily as his eyes dotted around the room. And he responded: “Did I miss a striker?” Despite their lack of a frontman, City have been habitually mesmerising in attack this season and have racked up a staggering 134 goals in all competitions.

They have scored six goals on three separate occasions and even found the back of the net seven times during their Premier League clash with Leeds at the Etihad Stadium in December. And Guardiola clearly feels he hasn’t been lacking in any area of the pitch.

City have become the favourites to sign Erling Haaland this summer, with the ace seemingly heading for the Borussia Dortmund exit. And that has led to speculation that Jesus will quit City in favour of a move elsewhere with Arsenal being heavily linked. And the 25-year-old refused to commit his future to the Citizens after bagging four goals and an assist against Watford last month.

“It’s not time to think about this,” Jesus said after being asked if he would stay and fight for his place if City bring in a new a striker this summer. “You expect me to say this, but it’s true. This is no time to think about this. Now is the best moment of the season. I want to enjoy, to keep focused on my team, with my team-mates – to fight for the Premier League.”