Manchester United handed Roma another heavy beating at Old Trafford, winning 6-2 thanks to doubles from Edinson Cavani and Bruno Fernandes to move within sight of the Europa League final.

Fourteen years after being thrashed 7-1 in the Champions League quarter-finals, Roma imploded again at the home of the English Premier League giants on Thursday (Friday AEST) after leading 2-1 at half-time in the first leg of the semi-finals. 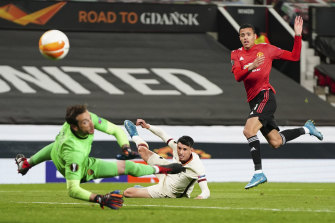 United look set to end their struggles in the semi-finals of major competitions, having lost at this stage on four occasions in the past 16 months — including to Sevilla in last season’s Europa League.

Roma will bemoan their misfortune with injuries. Midfielder Jordan Veretout, goalkeeper Pau Lopez and wing-back Leonardo Spinazzola were forced off inside the opening 37 minutes. It meant under-pressure manager Paulo Fonseca was unable to make a substitution after half-time.

Villarreal claimed a narrow advantage in their Europa League semi-final against Arsenal with a 2-1 home victory in the first leg on Thursday, although they will feel frustrated at letting the London club off the hook. 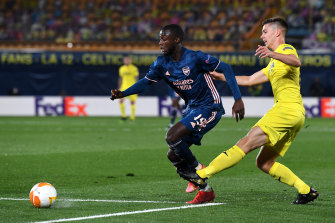 First-half goals by Manu Trigueros and Raul Albiol put the Spanish club in command and it looked bleak for the visitors when Dani Ceballos was sent off just before the hour mark.

Arsenal were rocking and needed keeper Bernd Leno to avoid them slipping further behind but they were thrown a lifeline when Nicolas Pepe converted a 73rd-minute penalty.

Villarreal, coached by former Arsenal manager and Europe League specialist Unai Emery, maintained their 100 per cent home record in the competition this season.

But the tie remains delicately balanced before next week’s return in London.

Tags: as, for, hit, Man, Roma, Six, United
You may also like
Latest Posts