‘Are you not ashamed of the way visitors to your city were treated?’: Manchester United Supporters Trust write to mayor of Bruges to complain about the ‘deplorable treatment’ of their fans at Europa League tie

The Manchester United Supporters Trust have written to the mayor of Bruges to complain about the ‘deplorable treatment’ of their fans at last week’s Europa League tie in Belgium.

United fans are demanding to know why local police were so hostile towards away supporters, a water cannon and barbed wire were in evidence outside the Jan Breydelstadion, and protective netting used inside the ground.

They claim that United fans were also stopped from leaving the stadium with security gates ordered to be locked, leading to fears of a crush inside. 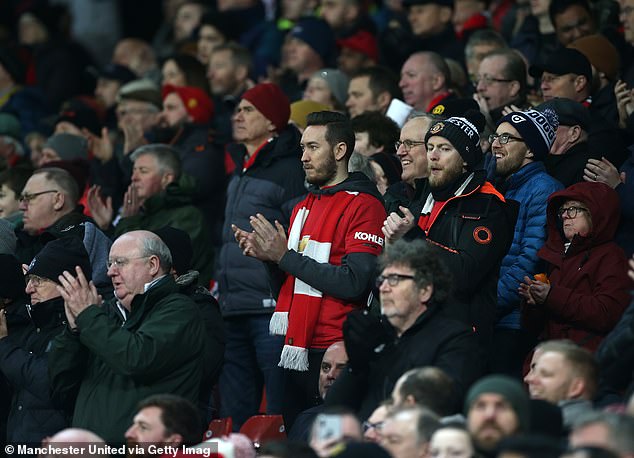 There were also complaints that English fans were taken off buses and denied access to taxis, meaning they had to walk to and from the ground in cold and wet conditions.

In an open letter to Dirk De fauw, the mayor of Bruges, MUST have asked a series of questions in the wake of ‘the worst experience of a European away game for many years’.

It reads: ‘It is with regret and with grave concern that we write this open letter to you all, but as representatives of law abiding supporters and members we have no choice other than to highlight, in this way, the deplorable treatment we were subjected to during our visit to Brugge, by the local police and stewards.

‘It is not an exaggeration to say that many fans were in genuine fear for their safety at times throughout the evening.

‘Many of us who’ve travelled the world following MUFC are of the opinion that this was the worst experience of a European away game they’d had for many years – and our previous recent visit to Brugge (in 2015) was a low point at the time. 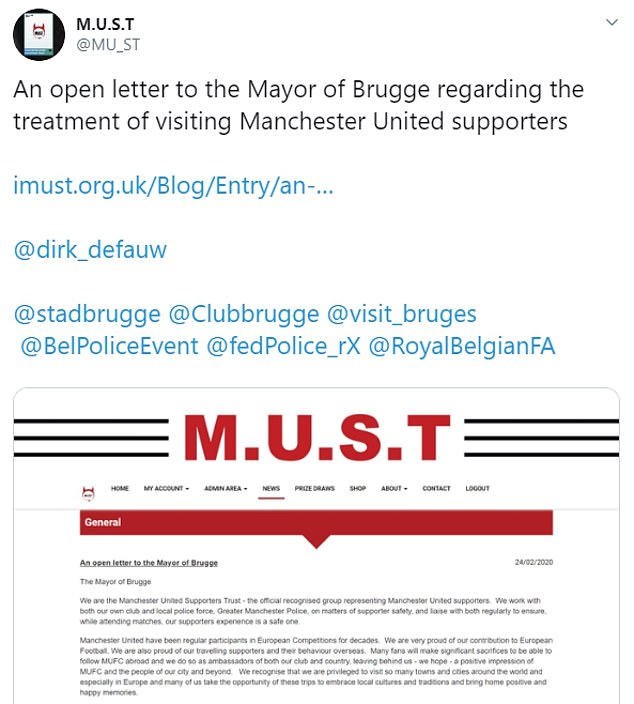 ‘It was a long walk in horrendous weather conditions from the town to the stadium. A significant number of our supporters were elderly or had mobility issues which meant this was a big problem.

‘Local authorities arranging buses for us is the norm at most of our away games. Instead, police were stopping buses before reaching the ground and removing United fans forcibly and telling them to walk.

‘The crowd management in close proximity to the stadium was appalling with many of our fans complaining they’d been deliberately sent in the wrong direction on long detours. Is there no coordinated plan from the club, stewards and police for visiting supporters?

‘The almost universal hostility from police when they were approached for assistance/directions further suggests this was part of a wider and deliberate policy of provocation. Why were the police instructed to act in such antagonistic fashion.

‘Why was it felt necessary to deploy a water cannon, where was the evidence that one may have been necessary? Why was it necessary to use barbed wire barriers for a football match?

‘Why is netting used when there have been no incidents of missiles being thrown by Manchester United fans on previous visits? 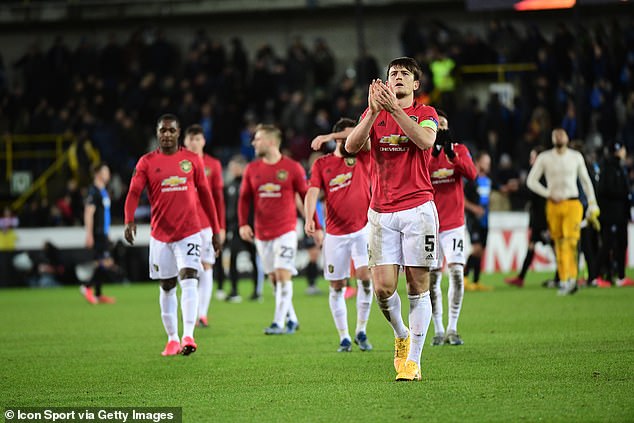 ‘Why were fans unable to leave the stadium? Why were exit gates locked leading to the build-up of crowds and the risk of a crush developing both at the exit from the concourse and at the bottom of the stairs?

‘In the second half the head steward – who appeared frightened by developments and said this would be the last night he would work here – revealed he no longer had the exit key as the police had taken it from him and there was no-one near the gate who could open it even in an emergency.

‘Poor treatment is one issue but the safety concerns go far beyond that and we will be sending a report to UEFA outlining the issues our supporters have sent to us.’

MUST highlighted the treatment Club Bruges fans can expect to receive in Manchester when they visit for Thursday’s second leg at Old Trafford. The first game was drawn 1-1.

The letter concluded: ‘Finally, we would like to reassure Club Brugge supporters that they will be extended a warm welcome to Manchester next week and will categorically not experience the same barbed wire, water cannons, poor crowd management, stewarding and policing that our fans had to endure when visiting your city. Brugge supporters visiting Old Trafford will also have an unobstructed view of the pitch with no netting and a roof to keep them dry should it rain.

Former jockey James Winks opens a business coaching his former opposing jockeys in Melbourne and Sydney
Recent Posts
This website uses cookies to improve your user experience and to provide you with advertisements that are relevant to your interests. By continuing to browse the site you are agreeing to our use of cookies.Ok