Manchester United youngster Hannibal Mejbri has sent fans wild after a stunning no-look pass in the club’s Under 18s match with Derby County. Fans couldn’t help but gush over the 17-year-old, who has made a name for himself with some fine performances this season.

Manchester United paid £4.2million to sign Mejbri from Ligue 1 side Monaco back in the summer.

And, although the 17-year-old is yet to make a single start for the first team, he’s already held in high regard.

United’s Under 18s side lost 2-1 to Derby early on Saturday but Mejbri impressed, with a stunning no-look pass the highlight.

And fans reacting to the sublime piece of skill have taken to Twitter to talk up the Moroccan.

A United fan account tweeted out the clip of his pass accompanied with the caption: “This no-look pass from Hannibal Mejbri.”

And one fan said: “Gona (sic) be some player this lad.” 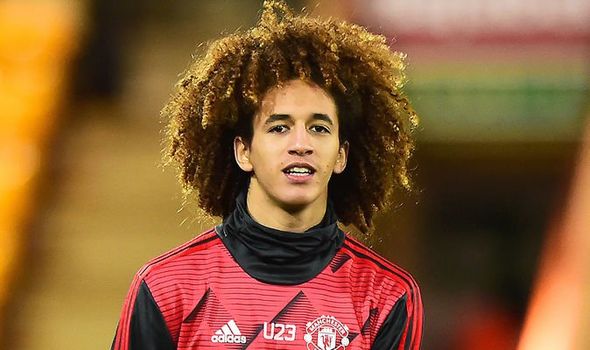 A third supporter said: “Just sitting here biting my nails in anticipation when this lad is gonna make his debut… Probably next season though..”

“I’m not gonna lie. I’ve seen various greats do a no look pass (ronaldinho, cr7, etc.), but I haven’t seen anyone pull one off this good,” were the words of a fourth fan.

“Look at the sauce of this boy,” added another.

A sixth opined: “Just needs a bit of bulking and he’ll be in our first team squad.”

And another said: “You love to see it.” 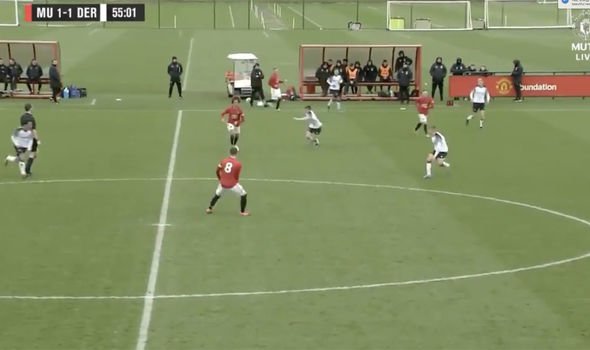 A source recently told The Athletic that Mejbri was starring in training behind the scenes.

“He is composed, can go past a player and break a line,” they said.

“He actually takes the p*** sometimes against players a couple of years older than him.

“He’ll feint to strike then drag it and shoot the other way.”

United coach Nicky Butt recently talked up the 17-year-old, saying: “When you’re a young player and you get brought in for a relatively big fee from a foreign club, you’re gonna have everybody watching you, and he’s aware of that.

“He’s a very good player, talent-wise, or else we wouldn’t have brought him in, so that’s a given.

“But he is still only a baby, just six months out of school. He has still got a lot of growing to do.

“He is a good size vertically but he needs to fill out, get stronger, and he needs to learn certain parts of his game — like they all do.

“But we’re very confident in that he’s at a really good starting point.

“He’s a very hard-working boy and hopefully, given time, and not too much pressure, he’ll get to where we want him to be.”