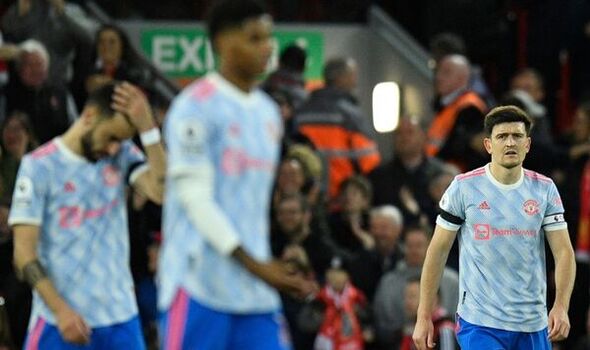 If Erik ten Hag was watching Manchester United’s 4-0 defeat to Liverpool, he may already be regretting what he has already signed up for next season. The Red Devils were battered from pillar to post and barely laid a glove on their rivals, who have now beaten United 9-0 over the course of both matches in the Premier League this season. Here’s how Ralf Rangnick’s players rated in one of their most shameful performances of the season…

Squared up to Trent Alexander-Arnold after the Liverpool full-back rifled the ball towards his face following the opener.

Helpless for all three Liverpool goals.

Had problems coping with the movement and speed of Mane. Clumsy at times, while the third Liverpool goal came from his side.

Looked like he was blowing in the first half but he can’t be blamed, this was only his second Premier League start since January 2020.

Was subbed at half-time but cannot be blamed for the monstrosity that was on show.

Hesitated on Diaz’s opening goal, leading to a disjoined backline that was ruthlessly exposed.

Just not up to the required standard of a Manchester United captain.

Generally one of United’s better players. Defended reasonably well and helped turn defence into attack on more than one occasion.

Subbed due to injury after nine minutes, jeered by some sections of the Manchester United crowd.

Didn’t really do too much wrong personally, and showed a willingness to get forward.

Didn’t look interested at times, half-heartedly pressed. Passing was also off, despite a peach of a through ball to Jadon Sancho.

Lost the ball for Liverpool’s third goal. Was a bit indecisive in crucial moments but can’t really be heavily criticised.

Poor touch when 1 on 1 with Alisson. Upped his rating by tracking back to rob Diaz of possession on 65 minutes.

Did miss a big chance in the second half though when he fired straight at the Liverpool goalkeeper.

Replaced Pogba after nine minutes. Worked hard but was often missed out.

Looked really bright whenever the ball was at his feet. Went on one mazy dribble that saw United look really dangerous but they couldn’t convert.

Ran around like a lunatic and was nearly sent off after hammering Jordan Henderson. At least he showed some fight.