Manchester United could have a potential crisis on their hands with Bruno Fernandes and Paul Pogba both injured in a training ground collision. The pair have been in superb form for the Red Devils since the Premier League restart and this could be a huge problem for Ole Gunnar Solskjaer.

Both Fernandes and Pogba are now doubts to face Bournemouth in the Premier League on Saturday (3pm).

A win would send United above Chelsea in the table before the Blues take on Watford at 8pm.

The clash was accidental when Pogba ran into his team-mate as Solskjaer was putting his squad through some exercises at Carrington.

Both had to receive treatment with Fernandes said to come off worse in the altercation. 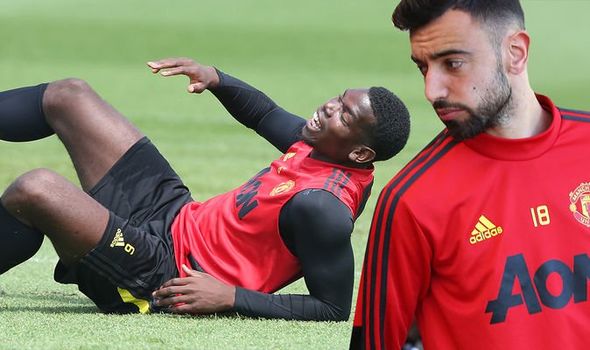 United have refused to comment on the situation which could impact Solskjaer’s team selection in a big way for the match against Bournemouth.

The Red Devils are pushing hard for a place in the top four and could still win the FA Cup and Europa League.

Fernandes and Pogba were superb together in the 3-0 hammering of Brighton earlier this week.

Solskjaer will be desperate for the pair to have escaped with minor problems after the incident.