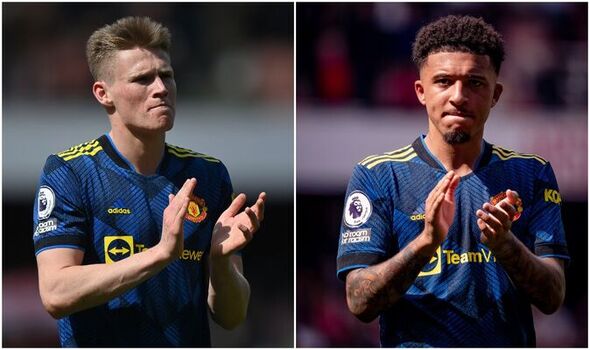 Manchester United have been told that the club’s toxic culture is failing their young players. Former Liverpool and Aston Villa striker Dean Saunders believes only Scott McTominay has been able to develop at Old Trafford, while Jadon Sancho and Marcus Rashford have regressed.

The Red Devils are in disarray and have endured a terrible season. They are sixth in the Premier League, six points adrift of the Champions League places.

Ralf Rangnick has been unable to turn around the club’s form. Recent disappointing defeats by Liverpool and Arsenal have angered supporters, while fury aimed at the United hierarchy has rumbled on in the background.

And Saunders believes the toxicity has contributed to the stunted development of some of the club’s young players. Winger Sancho has been inconsistent in his first season back in England, while Rashford is yet to develop into the player many thought he would.

McTominay – 26 this year – has become a key player under both Rangnick and former boss Ole Gunnar Solskjaer. But Saunders believes that is down to hard work and in spite of the culture at United – while pointing to the work Arsenal head coach Mikel Arteta has done to improve the environment at the Emirates Stadium.

“But Sancho, Rashford… you know how Arteta got rid of [Pierre-Emerick] Aubameyang and everyone was going, ‘I don’t know whether you should have, he’s the best striker, he’ll score goals’. Arteta knew he might lose games and he might get sacked because his centre forward has gone.

“But he has obviously had a word with the board and said, ‘if you don’t change the culture of the club…. We’ve got young players coming through, Saka, Smith Rowe. If you’re in on time then great, but if you’re late then you’re going to get punished’.”

Arteta brutally ostracised Aubameyang following a succession of disciplinary breaches. The former Gunners captain has since departed to Barcelona, where his goalscoring form has prompted suggestions that he could have been of use to Arsenal.

But Arteta has improved results and his side are fourth in the top-flight. New United boss Erik ten Hag will hope to oversee a similarly ruthless overhaul of haul the squad onto the right path.