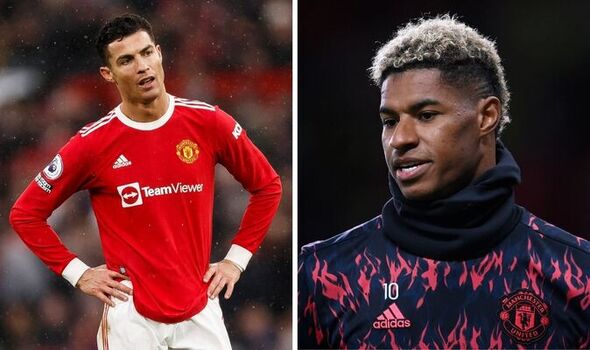 Marcus Rashford has angrily rubbished claims the English players at Manchester United are frustrated by an alleged dressing room divide created by Cristiano Ronaldo. The 24-year-old was dropped to the bench by Ralf Rangnick on Tuesday night for the 2-0 win over Brighton after previously featuring in attack alongside Ronaldo and Jadon Sancho against Southampton last weekend.

Reports from Bild in Germany have since suggested the likes of Rashford and Harry Maguire are losing patience over a supposed clique that has been formed in the dressing room by Ronaldo.

There has been plenty of talk of unrest behind the scenes at Old Trafford in recent weeks amid poor results but United’s players remain adamant all is well as the squad focuses their efforts on making something of their season.

Now Rashford has been unable to bite his tongue, jumping to the defence of his team-mates by calling out journalist Christian Falk over the claims that read: “TRUE: The English Players like Harry Maguire, Marcus Rashford and Co are irritated that Ronaldo wants to lead the dressing room with his own clique. There is a risk of a split in the team.”

The United and England attacker responded: “Are we just making it up as we go along now then? Please stop looking for divides.”

It’s not the first time Rashford has spoken out on speculation regarding the morale in the United dressing room in recent months.

Back in early January, reports claimed up to 17 senior players at United wanted out of the club after struggling to adapt to Rangnick’s methods.

Rashford then moved to provide clarity on what was really going on behind the scenes at Carrington, while also assessing his own personal form that had faced scrutiny.

He said: “I read something earlier that said I’d been quiet on here but what can I say that will make this better other than showing you all on the pitch?

“I have endless respect for both and I’m looking forward to bettering my game under the staff at Manchester United.

“I’m not sulking, I’m not unhappy, am I disappointed in some of my recent performances? Of course, I am.

“I’m my own biggest critic. It’s been a tough start but I’m determined to prove my worth.”

Since then, Rashford has scored two Premier League goals from United’s seven matches, having started just two of those games.

While United’s recent form in their pursuit of a top-four finish has been questionable – they are now unbeaten in their last six Premier League matches.

The Red Devils have moved up to fourth following the 2-0 victory over Brighton at Old Trafford.

Ronaldo, who has had to face his fair share of criticism following his longest goal drought since the 2008-09 season, finally ended the rut with a brilliantly-struck opener.

Rangnick dropped the Portuguese icon for the 1-1 midweek draw at Burnley last week but restored Ronaldo to the starting line-up against Southampton.

Now United’s Champions League last 16 tie with Atletico Madrid is on the horizon and the competition now represents Ronaldo and United’s only chance of silverware this season.

First up though is a trip to Leeds on Sunday in what will be the club’s first visit to Elland Road since the return of fans and the Whites’ return to the top-flight.