Manchester United’s hopes of signing Red Bull Salzburg wonderkid Benjamin Sesko appear to be in tatters amid reports that Red Bull Leipzig are closing in on an agreement to sign him next summer. The Red Devils and Chelsea are among a host of top clubs to have shown an interest in the Slovenian, who is tipped for a bright future.

Sesko’s name entered the mainstream earlier this summer when United, Chelsea, Newcastle United and others were credited with interest in the teenager. He made sure that people respected his football ability, too, by scoring an eye-catching winner against Liverpool in a pre-season friendly.

While meetings had been held between Sesko’s agent and a cluster of interested sides, Salzburg supposedly remained adamant that any deal this summer would not be feasible. Now, transfer insider Fabrizio Romano claims that RB Leipzig are poised to strike with the German club ‘closing in’ on an agreement for the striker that would see him move to the Bundesliga in 12 months’ time.

Sesko is supposedly happy to stay in Austria for another year, where he has made a fast start to the new campaign with one goal and one assist in three league matches. The reports adds that the youngster’s future could be confirmed this week. 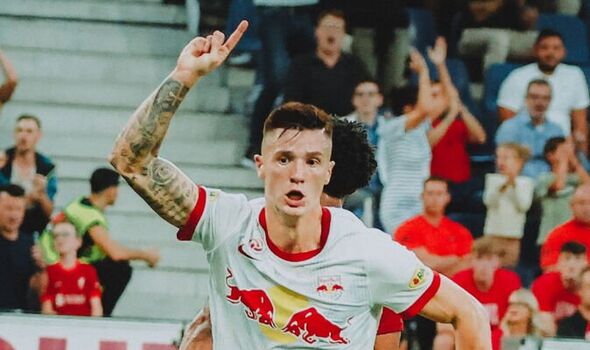 Lepizig have also agreed a permanent £25.3million deal for Chelsea flop Timo Werner, with the German set to return to his former club imminently. They have a solid reputation for developing young talent and cashing in when the time is right, meaning top sides could have another pop at Sesko in a few years’ time.

Missing out on another exciting target will come as a painful blow for Red Devils fans with Erik ten Hag’s transfer priority, Frenkie de Jong, also on the verge of slipping through the net. Chelsea are thought to be the Dutchman’s preferred destination due to the prospect of living in London and the lure of Champions League football, although staying at Barcelona remains a possibility.