Madrid: Manchester City produced a stunning late comeback at the Bernabeu to claim a 2-1 win over Real Madrid in the first leg of their Champions League last-16 tie.

Two goals in five minutes put the Sky Blues in the driving seat for their return leg at the Etihad Stadium in Manchester on March 17. 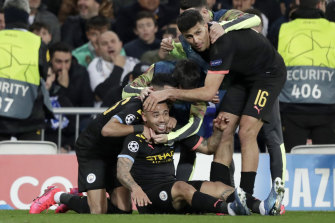 In Lyon, hosts Olympique Lyon scored a 1-0 win over ex-champions Juventus with Lucas Tousart's volley giving the French an advantage for their return leg on March 17 in Turin.

Francisco "Isco" Alarcon put Madrid ahead in the 60th minute after a mistake by Manchester City midfielder Rodri, but Gabriel Jesus evened the match with a header in the 78th minute. 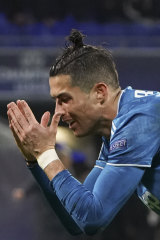 Juventus’ Cristiano Ronaldo reacts after not being awarded a penalty against Lyon.Credit:AP

Kevin De Bruyne then scored the winner by converting an 83rd-minute penalty after a foul by Dani Carvajal on substitute Raheem Sterling.

Madrid played the final minutes without defender Sergio Ramos after he was shown a red card for a foul to stop an 86th-minute breakaway by Jesus.

Pep Guardiola's City, who are likely playing in their last Champions League before having to serve a two-year ban from UEFA, were the most dangerous team throughout the match but couldn't get past Madrid goalkeeper Thibaut Courtois until Jesus' close-range header.

UEFA recently handed City a ban from European competitions for the next two seasons after a panel found that they had seriously breached financial regulations and failed to cooperate with investigators.

The club has filed an appeal at the Court of Arbitration for Sport, but if the punishment stands, City won't be back in the Champions League until the 2022-23 season.

In Lyon, Toko Nkambi's glancing header in the 21st off a corner kick hit the crossbar as the hosts showed no fear.

It took Juve until the 69th minute to register a serious chance to equalise as Paulo Dybala's shot fell inches left.

Gonzalo Higuain then aimed wide while Dybala and Cristiano Ronaldo appealed in vain for penalties as Lyon held on for a morale-boosting win in contrast to a modest French league campaign.

It was host Lyon's first win over the Italian champions in five outings.