Ole Gunnar Solskjaer praised January signings Bruno Fernandes and Odion Ighalo after Manchester United eased through to the last 16 of the Europa League.

Fernandes pulled the strings in the first half, scoring the opening goal from the penalty spot after a spectacular handball from defender Simon Deli, who was sent off. 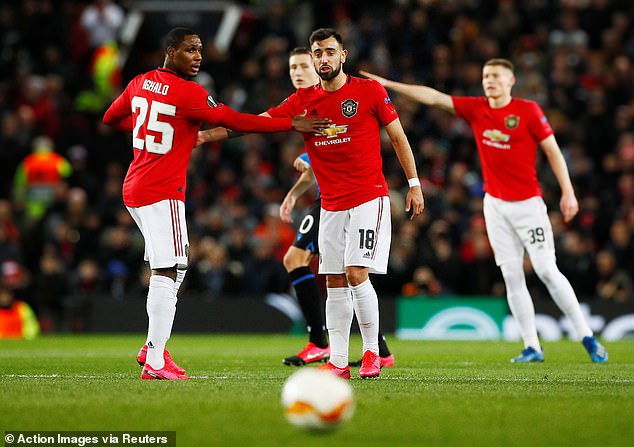 The Portuguese then played a crucial role in the second for Ighalo before Scott McTominay, making a welcome return to the starting line-up after injury, grabbed a third before half-time.

Two late goals from Fred emphasised United’s superiority, and Solskjaer was understandably buoyant as he reflected on the performance.

The Norwegian said: ‘I’m very happy tonight. Obviously we’re in a moment now that we rotate a bit, players are getting games, but, when you score goals and play like this, you’re going to get more confidence.

‘It was brilliant to see the start of the game, I thought they had the right intent, created loads of chances, and, when they go down to 10 men, of course the game was more or less over.’ 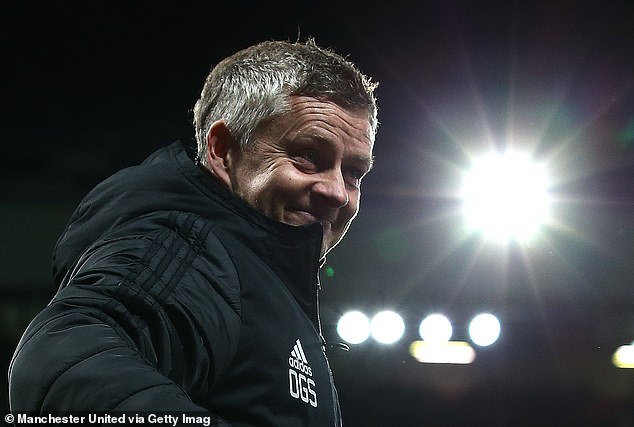 Fernandes has had a huge impact since his move from Sporting Lisbon, while Ighalo was given a first start since his surprise loan signing from Shanghai Shenhua and responded with a strong display.

‘Bruno coming in obviously makes a big, big difference,’ said Solskjaer. ‘You can see he’s got a hand in all the three first goals. What a pass, what a goal Odion’s goal was.

‘I’m very happy with the contribution of Odion as well up front, doing what he does. He’s a target man, we can play up to him, he’ll hold it, he’s got Juan (Mata) and Bruno next to him and you’ve got runners then.

‘I think as a fellow striker I know how important that first goal is. He’s been close a couple of times, you can see he sniffs goals. He wants to be there where it sometimes hurts. That goal, he’s sharp in his head. That’s a natural striker.’ 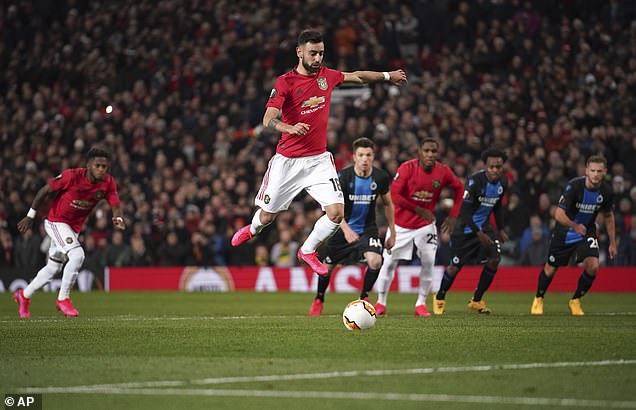 Two goals for Fred was another big positive for United, with the Brazilian finding the net for United for the first time since September 2018.

‘I wasn’t sure if I was going to be alive the next time he was going to score a goal because he’s had so many attempts,’ said Solskjaer with a smile.

‘But one with his right, one with his left. It’s been an ongoing joke between us of course, but he got that goal and I’m very pleased for him.’

The only bad news for United was a thigh injury for Anthony Martial that ruled him out of the squad.

Solskjaer is waiting to find out whether the forward could be available against Everton on Sunday, saying: ‘He went off training yesterday, just had treatment. He tried today, he reported, had a fitness test this morning.’ 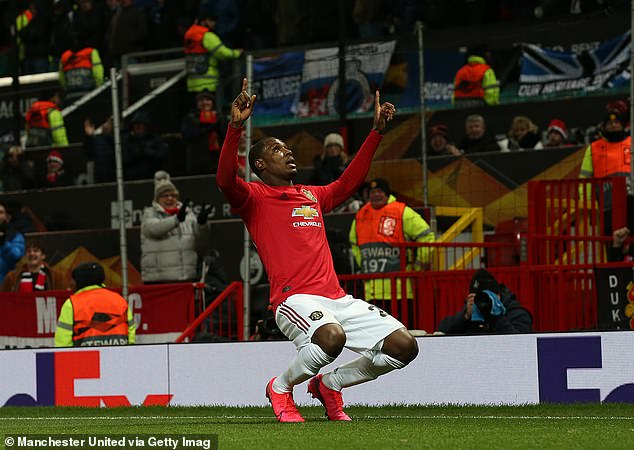 Brugge boss Philippe Clement felt his team were hard done by with refereeing decisions over the two games, citing a possible penalty for an early challenge by Harry Maguire on David Okereke.

On Deli’s moment of madness, Clement said: ‘It was a reaction, it was not intended. He apologised towards the team. It’s finished also for us because he did a very good season already.