The Glazer family could sell Manchester United in the wake of the European Super League scandal and the subsequent protests from supporters if the price from a buyer is “right”, according to football sponsorship expert Ian George.

Fans have publicly expressed their displeasure towards the club’s owners, who first acquired the club back in 2005, since United announced their part in plans to join a breakaway Super League, with anger towards the club’s hierarchy having increased among sections of the fanbase.

In the latest demonstration, which saw the Premier League game with Liverpool at Old Trafford postponed, some fans broke into the stadium and onto the pitch while there were clashes with police. A group of fans also protested outside the Lowry Hotel in Manchester city centre the same afternoon where the United team were staying.

Prior to United’s Europa League semi-final second leg clash with Roma on Thursday, manager Ole Gunnar Solskjaer, who received a personal apology from the Glazers concerning the proposed Super League plans, said he wants supporters to be listened to, but that protests have to be “civilised”.

Sky News US correspondent Sally Lockwood caught up with Avram Glazer in Florida and offered him the chance to address supporters’ concerns, but the 60-year-old refused to answer any of her questions.

Ian George, a football sponsorship expert who has had dealings with the office of the Glazers, thinks that if a buyer is willing to put a multi-billion pound offer on the table, it is possible that the ownership of United could move into different hands.

George told Sky Sports News: “It’s my personal opinion. I think perhaps yes if you look at the Big Six clubs, with the Glazers I think approaching 20 years of ownership some people will feel that it is time to move on.

“There will be an impact from sponsors, there are various fan groups which are thinking ‘enough is enough’. The chances are they will sell for a far greater price than they bought. But I would like to keep this balanced, the Big Six have been very good for the game in general terms. 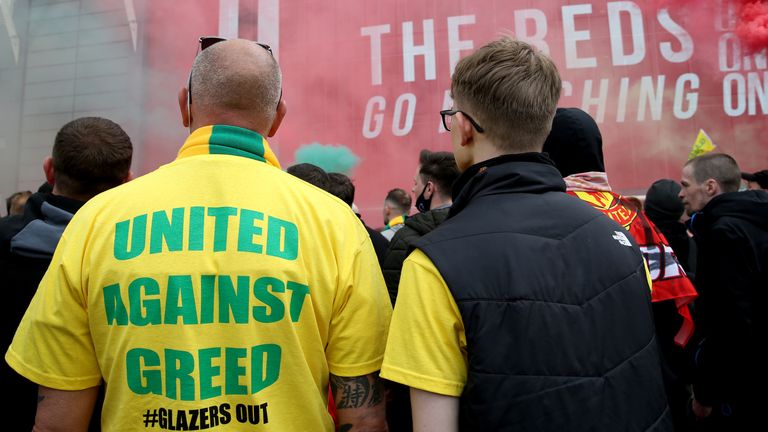 “Fans don’t like what they have seen recently but they also like their teams to do well and these owners have spent a lot of money. Fans would perhaps not want to go to a local fan-owned model where the money coming into the club would be a lot less. I am not a great fan of the German model, it is just my opinion.

“But I do believe if the price is right, and there will be a handful of people around the globe who could afford the two, three or four billion, which is arguably going to be a required tariff.”

Figures released in March showing their second-quarter accounts revealed that United’s debt has risen to £455.5m.

As well as further planned protests, a group of United fans have also launched a campaign to boycott the club’s commercial partners in a bid to put pressure on the American owners.

The Manchester United Supporters’ Trust, which wrote an open letter to Joel Glazer that included a ‘four-point reform plan’ requesting an increased level of fan involvement, has revealed that thousands of fans have joined their cause as full members in the past week, with many of those supporters making donations too. The big hike in membership follows the collapse of the ESL and subsequent apology from Joel Glazer to United fans.

Keith Harris, a former financial advisor at United and part of the Red Knights’ bid to buy the club from the Glazers in 2010, has urged fans to continue protesting and has told Sky Sports News they should refuse to attend matches.

As discontent grows towards the Glazer ownership, George thinks there is a likely chance that some Big Six chairmen and owners will listen to offers amid the continued disruption.

“We will see, the apologies have been made and we are coming towards the end of the season. I think the beginning of next season will be very interesting. But there are deals to be done I think with one or two the appetite might be there if the price is right,” he added.

“I think the recent protests at Manchester United and Arsenal have certainly focussed the attention of fans and the ‘Big Six’ and some might consider investment if they can get the right deal.

“It is purely my opinion, I haven’t spoken to the owners personally, I have made enquiries, but I think that if people are willing to pay the sort of tariff required, there could be some deals done but we will have to wait and see, who knows.”

Tags: be, could, Manchester, Sol, United
You may also like
Latest Posts