Manchester United fans have reacted positively to apparent leaked images of their new kits for next season.

The pictures shared by Twitter account NI Classic Shirt Co appear to show the as yet unreleased Adidas home, away and third shirts, complete with United’s new shirt sponsor TeamViewer.

And the most exciting news for the Red Devils is that it looks as if their 2021-22 away shirt will take inspiration from the blue and white design worn by Ryan Giggs among other stars between 1990 and 1992. 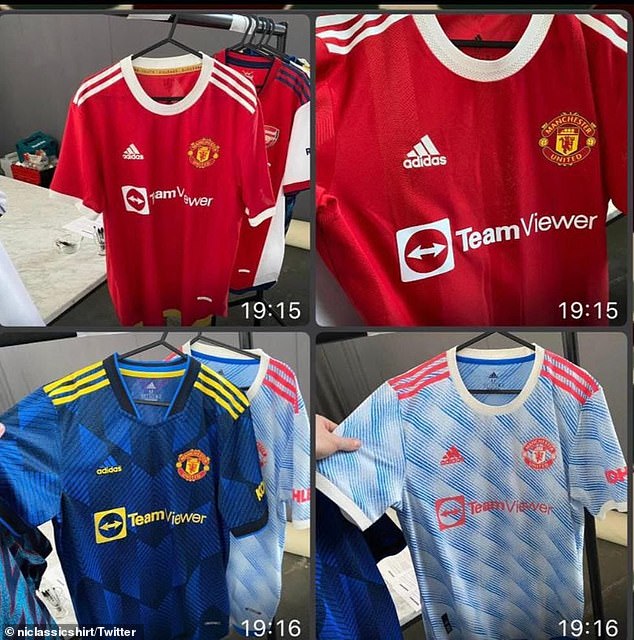 United’s third shirt appears to be a striking navy design, with chevrons down the front of the shirt and a yellow shirt sponsor and stripes.

Their 2021-22 home shirt looks to be more understated, using the same shade of red as this season’s kits. The images of the shirt feature white details and what appear to be subtle stripes across the front.

The images are the first to feature TeamViewer on the proposed shirts. Last month the German tech company agreed a five-year deal worth £235million to replace Chevrolet as United’s main sponsor.

United supporters were excited to see leaked pictures of the retro-inspired away strip when they surfaced on social media last month.

The famous geometric blue design was worn by Sir Alex Ferguson’s men when they beat Nottingham Forest 1-0 in the 1992 League Cup final and in a 6-2 demolition of Arsenal en route to Wembley.

It has since become a collector’s item which sells for as much as £350 on the Classic Football Shirts website.

Fans were quick to express their delight at the possible designs. One said they would have a ‘tough decision to make next season’ while another commented ‘bye bye bank account’.

The shirts are likely to set supporters back by £65 each – or £195 for all three – based on the cost of this season’s strips on the official Adidas website.