Marcelo was given a hero’s welcome by Olympiacos supporters as he was presented in front of a crowd of around 20,000 fans on Monday evening.

The fans chanted and lit flares as the new signing made his way onto the field at Georgios Karaiskakis Stadium in the port of Piraeus.

Marcelo, accompanied by his wife and two sons, arrived at Athens International Airport in the afternoon by private jet and was escorted to the stadium by club sports director Christian Karembeu.

He entered the field wearing the same No. 12 he wore at Real Madrid for the past 16 seasons.

Greek club Olympiacos signed Marcelo just a day after the Brazilian star was linked with a shock deadline-day move to Leicester City.

Reports in Greece suggested the 34-year-old had signed a one-year contract, with an option for an additional year.

The defender has spent the past 16 seasons playing for Real Madrid, where he accumulated the most titles in the club’s history. 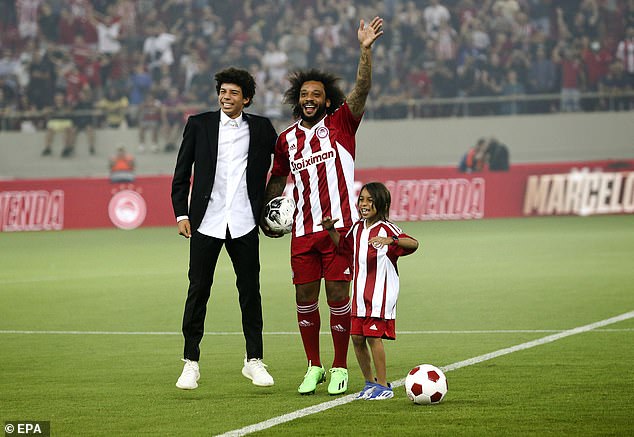 On Thursday, Leicester had played down the prospect of signing Marcelo after reports they were interested in the full back.

There had been claims the Brazilian, a free agent after leaving Real Madrid this summer when his contract ran out at the Bernabeu, was close to signing a one-year deal with the Foxes. 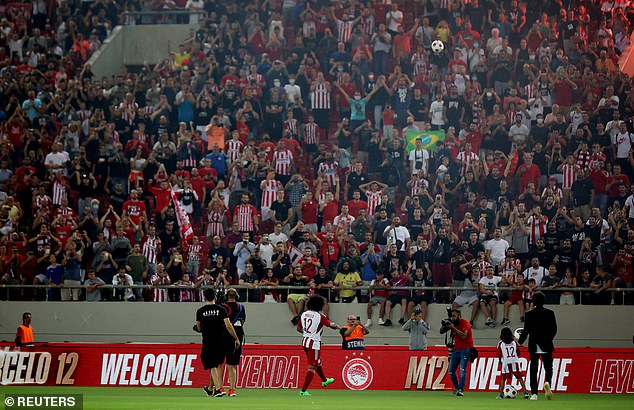 The Brazilian was welcomed by a crowd of around 20,000 Olympiacos fans

These came after the 58-cap international announced he was finally leaving Real Madrid in May, following his side’s 1-0 win against Liverpool in the Champions League final.

He was an unused substitute in that match, after being forced out of the side by Frenchman Ferland Mendy.

‘We’ve spoken and we’ve decided it’s best like that,’ Marcelo said in confirming his exit. ‘I’ve already done everything I had to do at Madrid. I’ve been lucky to be here for 15 and a half years at the best club in the world.’