The Matildas have one more chance to head into the Tokyo Olympics with a win under their belt after Tony Gustavsson’s side slumped to a third consecutive loss against Denmark in Horsens.

After two own goals in the space of 10 minutes the visitors trailed 3-0 just 25 minutes into a match they had begun in positive fashion, bolstered by the return of Europe-based quartet Ellie Carpenter, Steph Catley, Kyah Simon and Tameka Yallop. 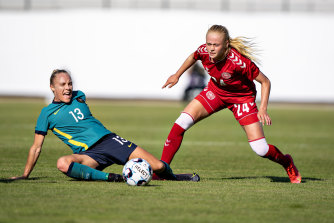 Tameka Yallop was responsible for the first of Australia’s two first-half own goals in Horsens.Credit:Ritzau Scanpix

Polkinghorne’s pinpoint header from an Emily Gielnik corner with a minute remaining in stoppage time added some respectability to the scoreline on a night that will go down as a missed opportunity for the world No. 9 Matildas.

The Australians had a late chance to snatch a draw but substitute Beattie Goad’s effort was easily dealt with by Denmark goalkeeper Lene Christensen.

The match was Australia’s third since returning from the COVID-enforced lay-off and follows a 5-2 loss to Germany and a 5-0 thumping by the Netherlands.

Gustavsson underlined a desire to look forward when he named his squad earlier this month, leaving 36-year-old Lisa De Vanna out despite a promising W-League campaign. Her Melbourne Victory teammate Kyra Cooney-Cross – along with Wanderers midfielder Courtney Nevin – was handed an international debut in Horsens. 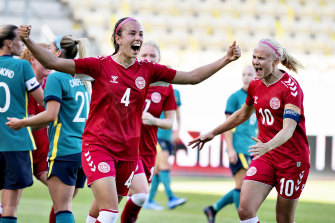 “Some players deserve a shot, some new players who have performed very well and I think has to be given an opportunity in the Matilda environment to see if they can bring what they brought at club level into the Matildas level and potentially be available for selection into an Olympic roster as well,” he said at the time.

The Matildas face world No.5 Sweden, one of their opponents in Tokyo, on Wednesday morning (AEST) in their final hit-out before the Olympics where they will also face New Zealand and four-time gold medallists the United States.

Tags: fall, Matildas, straigh, third, to
You may also like
Latest Posts