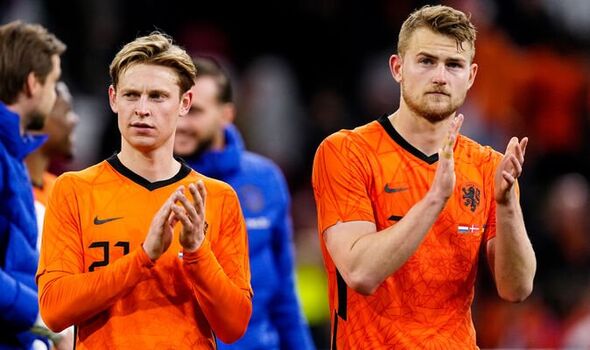 Manchester United have been given a glowing reference of Frenkie de Jong by the midfielder’s Holland and former Ajax team-mate Matthijs de Ligt. The Red Devils have been strongly linked with a transfer for the Barcelona ace, with new head coach Erik ten hag well aware of his talent.

United have earmarked De Jong as a possible midfield target as Ten Hag begins his monumental rebuild of the Old Trafford outfit. The 25-year-old played under the Dutchman at Ajax before joining Barca in 2019.

The La Liga are not not keen to allow De Jong to leave and wide reports suggest it could take around £72million for them to even come to the negotiating table. The Dutch international played 32 times as Barca finished runners-up to Real Madrid in the Spanish top-flight.

But United are apparently desperate to complete a transfer and have been told that De Jong is an ‘amazing player’ by Netherlands colleague De Ligt. Asked about the speculation involving De Jong, he told journalists: “He’s not said anything. But he’s an amazing player and everybody knows how important he is for the team.”

De Ligt also worked under Ten Hag at Ajax and helped the Eredivisie side reach the Champions League semi-final in 2019. He joined Juventus that same summer, while De Jong departed to Barca.

And the 22-year-old defender has suggested that his former boss will be a success at Old Trafford. He went into detail about how hard Ten Hag works behind the scenes.

“He is someone who loves his job and he loves to work. He wants to do everything to make his team play better. He’s really into the details,” De Ligt continued.

“This makes him a really good trainer who improves players. He has a lot of qualities to succeed and we will have to see how he goes.”

Ten Hag has been entrusted with leading the rebuild at United after joining from Ajax. The 52-year-old will have a busy summer putting together a squad capable of competing for a place in the Premier League’s top four.

Midfield is a particular area of concern following the departures of Paul Pogba, Jesse Lingard, Juan Mata and Nemanja Matic. The quartet will leave on free transfers when their contracts expire at the end of the month.

De Jong has been targeted while West Ham star Declan Rice has also been linked. However, Hammers boss David Moyes has slapped a £150m price tag onto the England midfielder.