Meet ‘AirPod Albert’, the ex-Man United and Wales assistant who got under Jose Mourinho’s skin and is obsessed with his iPad… now Stuivenberg is preparing to lead Arsenal with Mikel Arteta out with Covid

For all his coaching credentials and winner’s medals, Albert Stuivenberg is perhaps most widely known by Arsenal fans for his love of AirPods.

Stood alongside Mikel Arteta in the technical area, Stuivenberg often looks cool, calm and collected as he receives information from analysts through his beloved earphones.

It has become a unique enough look to earn him the nickname ‘AirPod Albert’ among supporters.

And it is down to Mr Technology himself to take the reins against league leaders Manchester City on New Year’s Day with Arteta forced into isolation following a positive Covid test this week. 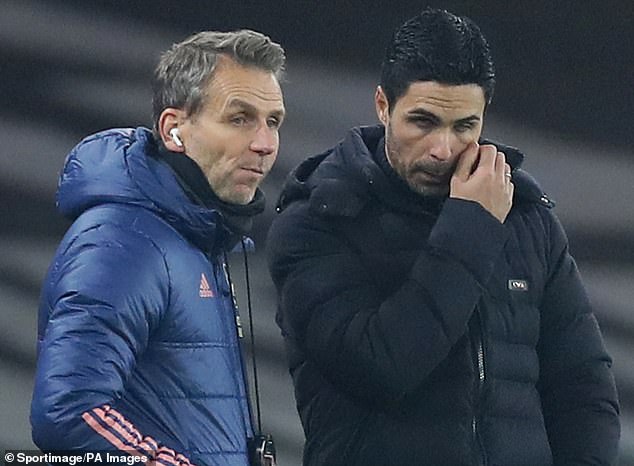 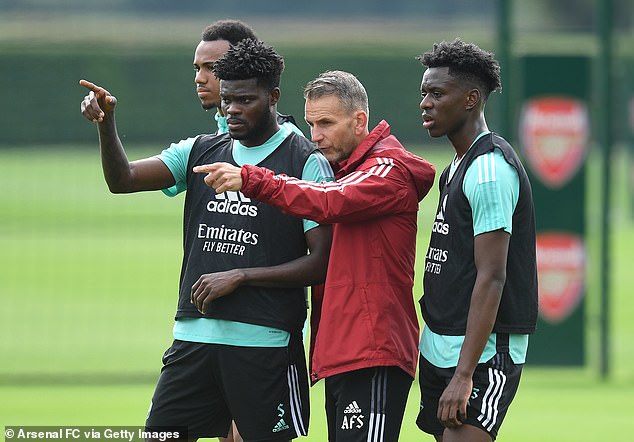 Arteta and Stuivenberg struck up a rapport when studying for their UEFA A coaching licenses in Cardiff with the Football Association of Wales.

It is a pathway favoured by many – Yaya Toure is among the course’s latest recruits – and Stuivenberg was one of Arteta’s first hires after being appointed as Unai Emery’s successor at Arsenal in 2019.

But Stuivenberg’s credentials as a coach go back much further to his native Holland after a cruciate ligament injury ended his playing career in 1989, putting wheels in motion for a key role to come on the other side of the white lines.

Feyenoord, who brought Stuivenberg through before he left for HFC Haarlem, found themselves keen to use his footballing acumen and he remained at the club for 13 years as an academy coach.

The progressive, forward-thinking coach was later heralded for the work he achieved in the youth set-up, where he played a key role in bringing through talents such as former Arsenal and Manchester United striker Robin van Persie.

In 2001 he was Feyenoord’s head of youth and in that same year his experience developed as assistant coach to the club’s Belgian feeder side Racing White Daring Molenbeek. Little by little Stuivenberg was making his mark as a coach. 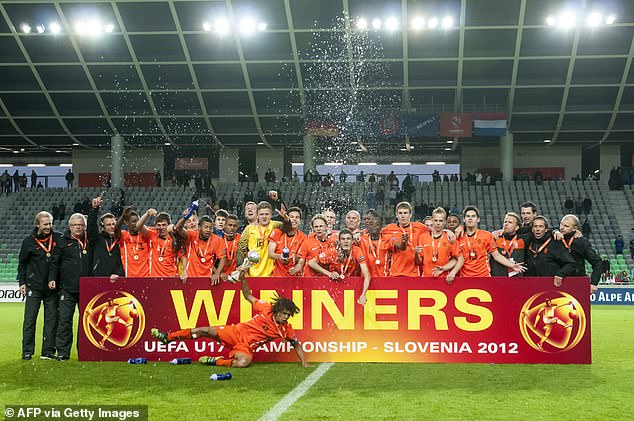 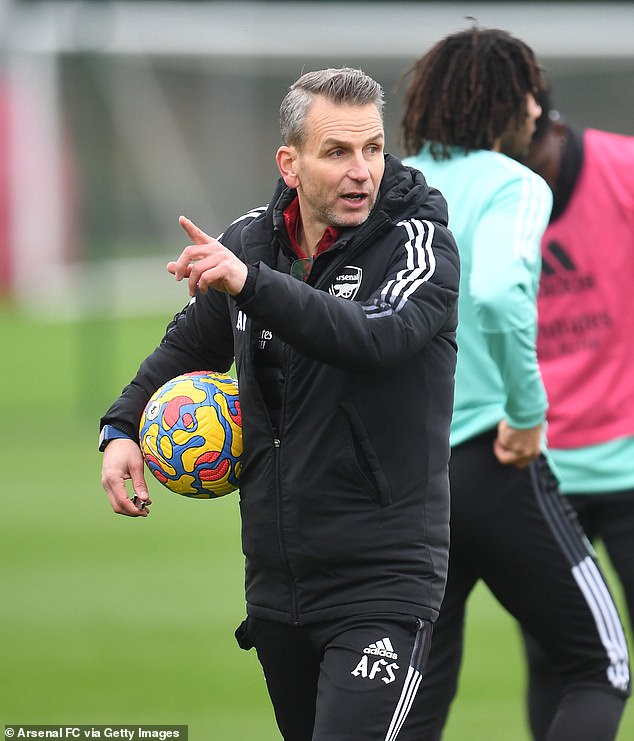 Officials at the Dutch FA had seen enough that by 2006, following a brief stint in the Middle East in another youth development role, he was appointed as manager of the country’s Under-17 team.

Holland had an issue in that its youth sides were struggling to leave any sort of indelible mark on international football. It was Stuivenberg’s job to change that.

Stuivenberg had provided the U17 side with a tactical identity and a solidity that made them contenders from then on.

It was 2011 when Stuivenberg and his players got hold of their first silverware following a 5-2 demolition of Germany, who beat them to the title in 2009, in the final.

Memphis Depay, now of Barcelona, was announcing himself as a star on the world stage and the Dutch, under the watchful eye of Stuivenberg were becoming a force to be reckoned with. 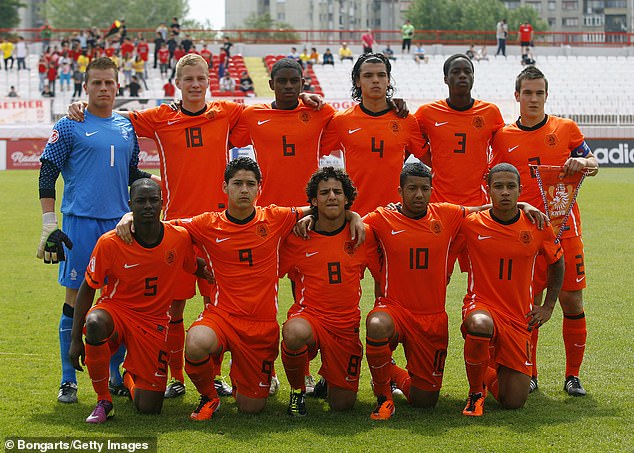 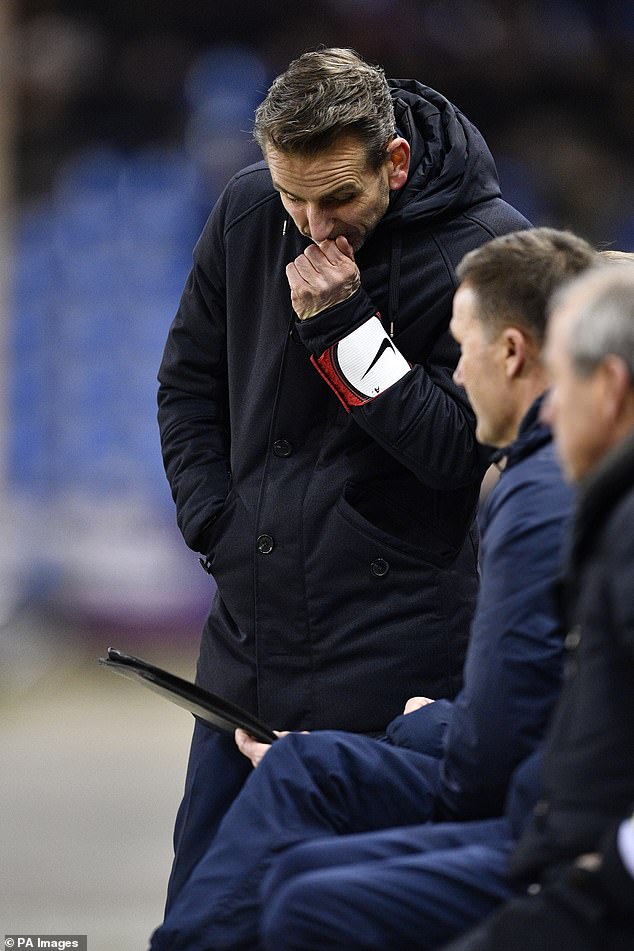 Twelve months later and it was a familiar story: Holland and Germany in the final and this time the Dutchmen showed their nerve on penalties to defend their title, with Man City’s Nathan Ake among the takers that night.

Stuivenberg’s reputation had sky-rocketed. Two titles, back-to-back, proved he was an elite coach and soon the FA bumped him up to be U21 boss. In short: go and repeat the trick, Albert.

While no silverware was garnered from three years leading the U21 side it was his successes with the U17 that caught the eye of Louis van Gaal, then at Manchester United.

Van Gaal liked Stuivenberg’s style and, as was revealed later, often gave him complete control after bringing him to Old Trafford in 2014.

‘At United, I was doing the training sessions for the selected first team before games. I was fully in charge,’ Stuivenberg told the Independent in 2017.

‘I was doing all the pre-match team talks, and I did the post-match talk with the team and individual players, he [van Gaal] gave me his complete trust.’

Those that have worked closely with Stuivenberg speak highly of his passion, as well as his attention to detail. 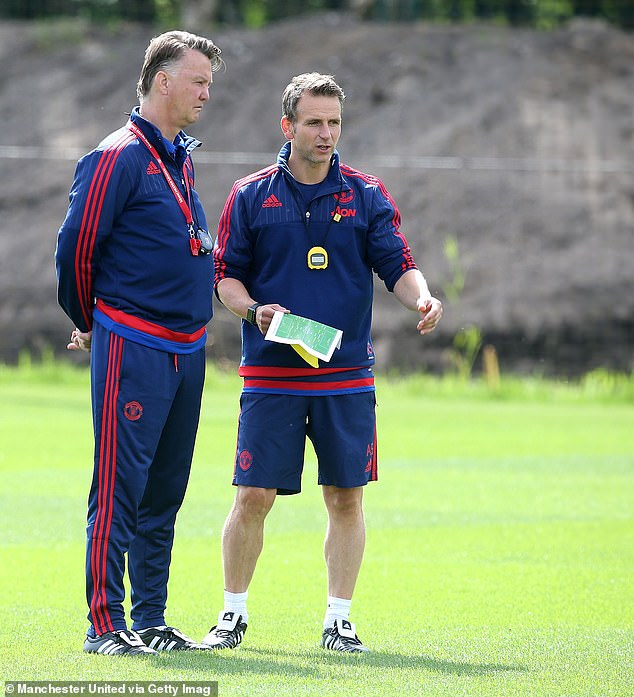 Before he became synonymous with his use of AirPods, the Dutch coach would often be seen giving substitutes tactical instructions from the iPad he keeps close by on the touchline.

Analysis and data is at the forefront of his philosophy to coaching.

As is typical across football, Van Gaal’s sacking at United in 2016 saw Stuivenberg follow him out the door and he felt ready to return to being Batman, rather than Robin.

Belgian side Genk extended the olive branch and gave Stuivenberg his first senior role as manager.

On paper he lost just 10 of his 48 games and was successful, navigating his side to the quarter-finals of the Europa League.

But Genk bosses had seen enough and he was axed within a year. Perhaps he was a better Robin than Batman anyway.

It took a call in 2018 from a familiar face at Manchester United in Ryan Giggs to coax him back into the dug-out, this time as Giggs’ assistant at Wales. 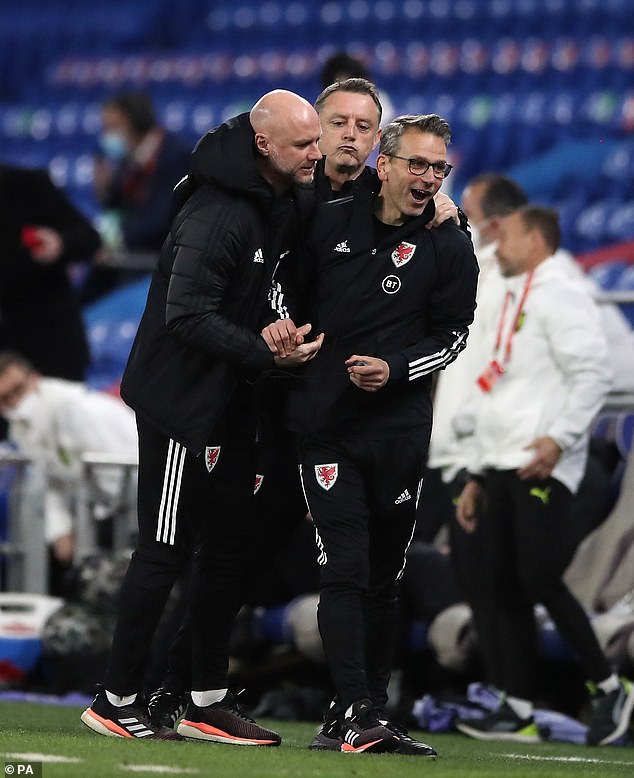 Giggs and Stuivenberg had become close as coaches under Van Gaal and after the disappointment of being sacked by Genk it felt a logical step back for the now-Arsenal coach.

Giggs was happy. Stuivenberg was happy. Jose Mourinho, while Tottenham manager, was far from happy.

Stuivenberg juggled both roles after Arteta got hired and he signed on to coach the Gunners as well as Wales.

Mourinho was left deeply uncomfortable by a coach from his north London rivals getting training ground time with his players, such as Gareth Bale, Ben Davies and Joe Rodon.

Suddenly, little-known Stuivenberg was in the middle of a north London turf war.

‘National team matches should have coaches that are exclusively for them and not coaches that work for other clubs,’ Mourinho said at the time.

‘The fact that one of the coaches is an Arsenal coach doesn’t make me very comfortable.’ 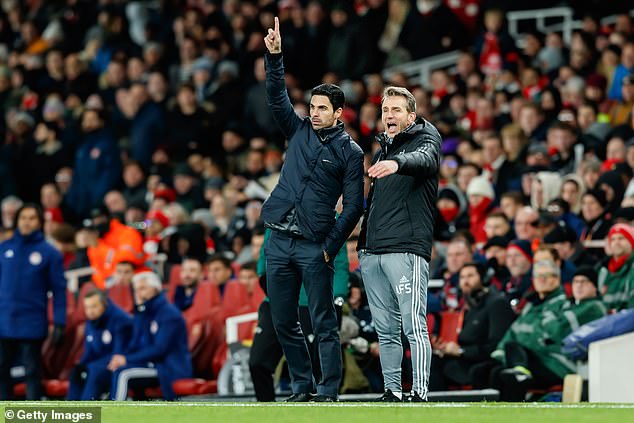 Now solely focused on Arsenal, the Dutchman (right) will find himself back at centre stage

Stuivenberg stayed on for Euro 2020 to help navigate Robert Page through the tournament before agreeing to step down and focus on his key role at Arsenal, where his work is helping form the tactics that is kickstarting a youth regeneration.

With Arteta sidelined due to a positive Covid test it is Stuivenberg that will come up against Pep Guardiola’s formidable side but he will hold no fear.

Here is a man with a sharp tactical philosophy who thrives working with younger players.

And if City run riot he can always shuffle his playlist for those beloved AirPods.