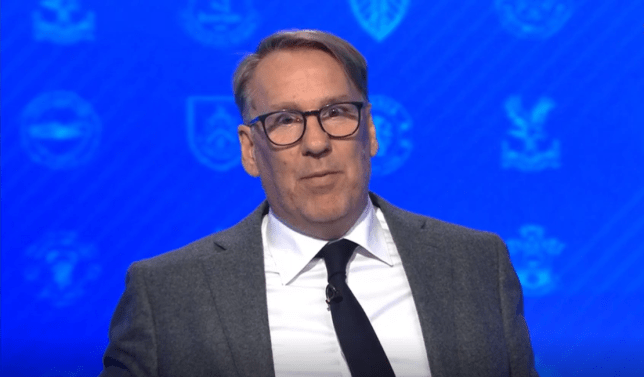 Paul Merson has made his predictions for the latest round of Premier League fixtures as Chelsea welcome Liverpool, Arsenal host Manchester City and Manchester United take on Wolves.

Chelsea head into the game in search of a much-needed win after picking up just one victory in their last four Premier League matches to find themselves at risk of falling behind in the title race.

The Blues haven’t had the most ideal preparation for Sunday’s game after a controversial interview involving star striker Romelu Lukaku was released, where the Belgium international hit out at Thomas Tuchel’s tactics and revealed that he’d like to return to former club Inter Milan in the near future.

Meanwhile, Liverpool will also be looking to keep up with current league leaders Manchester City after they suffered a disappointing 1-0 defeat to Leicester City in their last game.

Despite being only halfway through the season, the loser of this game, if there is one, could already be out of the race for the title given City’s eight point advantage at the top of the table.

High-flying Arsenal will be looking to extend their five-game unbeaten run in all competitions when they host City in Saturday morning’s early kick-off.

The Gunners currently occupy fourth spot in the table after picking up impressive victories over Southampton, West Ham, Leeds and Norwich in their last four top flight matches.

And while the are the underdogs for this clash, former City midfielder Nigel de Jong believes the match will be closer than many people expect.

City’s rivals, Manchester United will be looking to continue the momentum from their 3-1 win over Burnley on Thursday night, when they take on Wolves.

United have struggled to find any consistency so far this term, while Wolves, who have one of the best defensive records in the league, will provide a stern test for Ralf Rangnick’s side.

Merson has backed City and Liverpool to pick up crucial victories, while also predicting the results of the other matches for Sportskeeda.

Arsenal are playing well at the moment but Manchester City are on another planet, so anything other than a win for the away side will come as a huge surprise to me.

Arsenal always beat the so-called lesser teams and struggle badly against the big boys – this Premier League encounter looks like it could head in the same direction.

I expect the Manchester City juggernaut to roll on.

Tottenham will be disappointed after dropping points against Southampton – they played against ten men for a long time but failed to make it count.

Watford are a funny team and always have a result in them – I think they could give Spurs a game at Vicarage Road.

They got absolutely slaughtered by West Ham but we’ve seen what they can do at the other end of the pitch.

Spurs’ high tempo could catch up with them sooner rather than later, so I think this one will end all square.

Both teams are coming on the back of fantastic results in the Premier League, so this could be a great game at Selhurst Park.

People might give me a lot of stick for this, but I don’t think there is a lot between these two sides in terms of quality.

Their league positions might suggest otherwise, but a closer look at Palace’s results this season will tell you that they’ve been incredibly unlucky.

A lot of things went against them, so I believe they should be higher up the Premier League table.

I can’t separate these two sides at the moment so I’m going for a 1-1 draw.