It started with a grin and a cocked eyebrow from Arsene Wenger.

It was September 2013 and in the wake of a 1-0 win over Tottenham at the Emirates Stadium, the Frenchman was asked by Sky Sports’ Patrick Davison about Arsenal’s plans for the final days of the transfer window. “Maybe we’ll have a good surprise for you,” he said.

Arsenal’s summer recruitment at that point amounted to two free transfers. One to re-sign Mathieu Flamini from AC Milan, the other to bring in Yaya Sanogo, a promising but injury-prone striker from Auxerre. Supporters were underwhelmed and agitated.

They wanted more and 48 hours later they got it, Wenger’s “good surprise” materialising in the form of a sensational £42.5m deal for Real Madrid’s Mesut Ozil. It ranked as the third most expensive signing in British football history and nearly trebled Arsenal’s record outlay in the transfer market.

Ozil arrived at the Emirates Stadium as one of the game’s most exciting creative talents. A lavishly gifted playmaker who had lit up the 2010 World Cup with Germany and whose assists at Real Madrid – of which there were plenty – had made him Cristiano Ronaldo’s favourite team-mate.

It took just 11 minutes of his debut, a 3-1 win over Sunderland at the Stadium of Light, for Ozil to register his first for Arsenal, expertly controlling a long pass from Kieran Gibbs then squaring the ball for Olivier Giroud to finish.

“We will all have to check if he has fake boots,” said Sunderland manager Paolo Di Canio afterwards. “They were like a glove.”

There would be many more moments like it in the years ahead.

Ozil has always had different sides to him. Good and bad. Jaw-dropping and head-scratching. But few players can match his technical brilliance. Few can even see the game in the way he does, let alone do the things he does with the ball at his feet.

His first two years in north London yielded back-to-back FA Cups either side of a World Cup triumph with Germany. But on an individual level, it was only in his third that it truly clicked for him at Arsenal. His 2015/16 season was an intoxicating display of craft and creativity.

Over the course of that campaign, Ozil had a direct hand in 28 goals in 45 appearances. He provided 19 assists in the Premier League, one short of Thierry Henry’s record, and created 146 chances, a staggering total which remains the highest in a single season since Opta started taking records almost two decades ago. 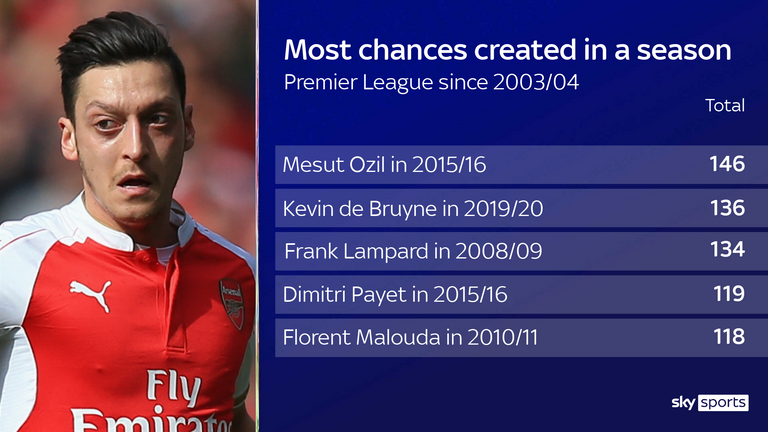 Arsenal were top of the Premier League on New Year’s Day thanks to a 2-0 win over Bournemouth in which Ozil scored one goal and set up the other – “he has become a completely sensational football player,” said Wenger afterwards – but ultimately they fell short in the title race, allowing Leicester to win the crown by a 10-point margin.

It felt like a missed opportunity. And while Ozil was named Arsenal’s Player of the Year at the end of it, he never hit those heights again, his output steadily declining from one season to the next, the moments of inspiration becoming more infrequent as the scrutiny of his body language and application became more intense.

The year 2018 encapsulated the ups and downs of his Arsenal career, starting with him signing a new contract worth an eye-watering £350,000 per week, and ending with him unceremoniously losing his place in the side.

In between, Ozil lost Wenger, his most ardent supporter at Arsenal, and announced his international retirement following a tumultuous World Cup campaign with Germany.

That international retirement was framed as a positive for Arsenal. A decision that would allow Ozil to focus exclusively on his club. But Wenger’s verdict turned out to be more accurate.

“A small bit of motivation disappears when you know that you don’t have to be ready for a World Cup, a European Championship,” said the departed manager. “He loses a bit if he does not play at an international level.”

He spoke about “provoking friction” with Ozil in order to get more out of him in an interview with Sky Sports in January 2019. But those efforts were unsuccessful, culminating in Ozil’s omission from the side just a few months into his tenure.

Emery eventually reinstated him, such was his desperation for results, but it was a similar story under the Spaniard’s interim replacement Freddie Ljungberg, who dropped Ozil after a show of petulance during a 3-0 loss to Manchester City, and of course under Mikel Arteta, who last included Ozil in his starting line-up in March.

Ozil, seemingly unwilling to adhere to Arteta’s “non-negotiables” and unable to replicate his creative output of past seasons, was left to fade into the background, an expensive drain on resources at a time when the club desperately needed them.

It is a testament to his contribution in better times, however, that even now, after three fraught years in which he has featured sporadically, he still sits second among Premier League players for chances created since his debut in 2013. Christian Eriksen ranks above him, but only by virtue of playing 42 games more. 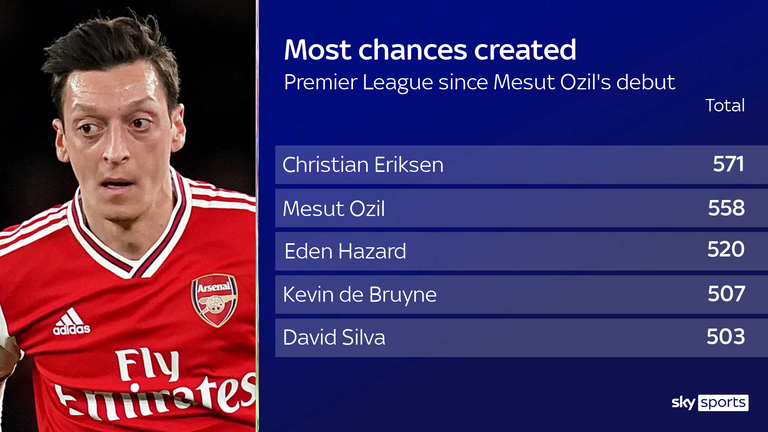 “What Mesut has done at the football club is unquestionable and that will stay,” said Arteta this week. “It doesn’t matter if he plays two more games, 10 more games or none. What he has done is there for the records, for the history of the club. Nobody can discuss that.”

Arteta insists he gave Ozil every chance to win back his place in the side before leaving him out of his Premier League and Europa League squads, the implication being that he failed to take them.

But Ozil is not solely to blame for how things turned out.

It is not his fault, after all, that Arsenal failed to strengthen the side around him sufficiently in the final years of Wenger’s reign. Or that Wenger’s successors were unable to construct attacking systems to maximise his talents. Or, indeed, that the emphasis in modern football switched so rapidly from the technical to the physical.

But it is telling, after everything, that the overriding feeling among supporters at the news of his departure is one of relief rather than sadness. Few could have predicted such an outcome on that heady night in September 2013 when his move to Arsenal was confirmed. But nearly a decade on, Ozil leaves a conflicted and complex legacy.