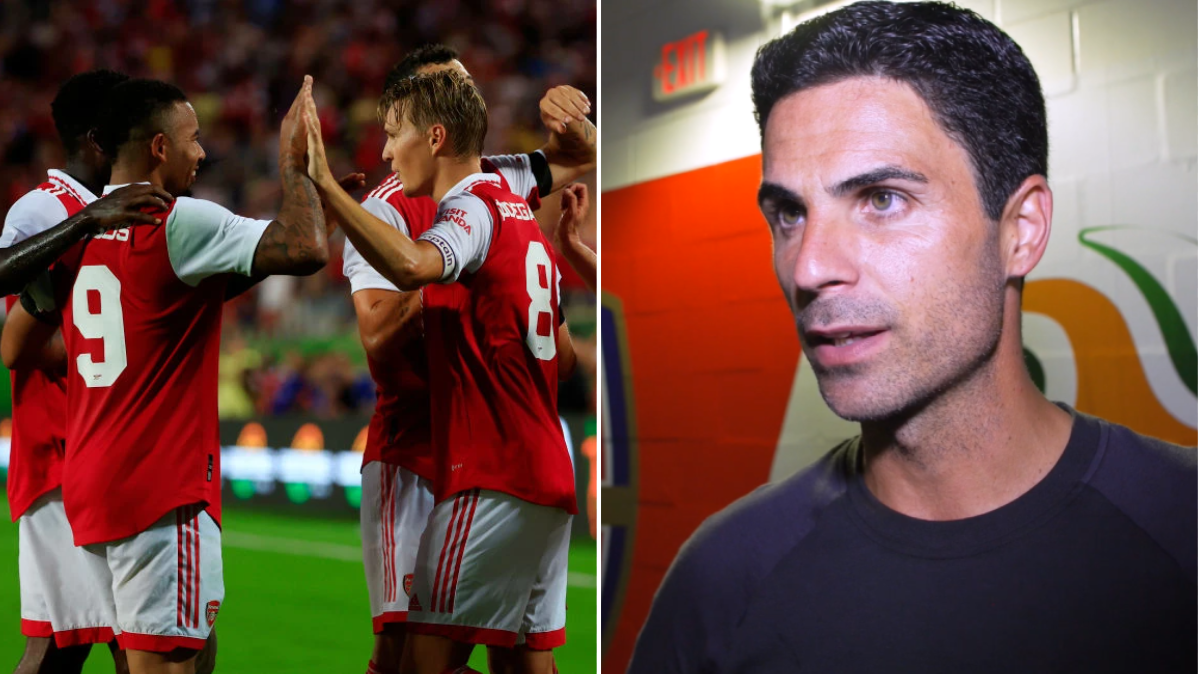 Mikel Arteta said he was ‘really happy’ with Arsenal’s pre-season tour after the Gunners rounded off a productive trip to America by smashing Premier League rivals Chelsea 4-0 in the Florida Cup.

Arsenal have enjoyed an almost flawless pre-season schedule and had beaten Nurnberg, Everton and Orlando City before meeting Chelsea at the Camping World Stadium in Florida on Sunday.

The Gunners produced a dominant display against Thomas Tuchel’s side, with goals from Gabriel Jesus, Martin Odegaard, Bukayo Saka and Albert Sambi Lokonga sealing a 4-0 win.

New signing Gabriel Jesus scored his fourth goal of pre-season during the victory but Arteta chose to reserve special praise for William Saliba and Oleksandr Zinchenko.

Saliba was one of only two Arsenal players to play the entire 90 minutes against Chelsea, while Zinchenko featured for 45 minutes just two days after his £32m move from Manchester City.

‘I’m really happy,’ Arsenal boss Arteta said. ‘With the performance in general and with the tour.

‘The attitude from a club perspective to show here, and all the work we have done and understand how big we are and the amount of support that we get.

‘Then obviously the performance today is a really good example again, that we are moving forward, improving a lot as a team, but don’t get carried away. It’s a test match and there are still a lot of things to do to get better.’

On Saliba, Arteta said: ‘I am really pleased to see the way he is playing, the way he has adapted to the team, the maturity that he’s shown at 21-years-old, carry on doing it.

‘We will keep developing him, he has a huge potential, he is already a top player and we have to make him even better.’

Asked if Saliba was ‘ready’ to make an impact at Arsenal ahead of the 2022-23 season, Arteta replied: ‘He looked ready to me today.’

Arteta also praised Zinchenko’s performance, adding: ‘He was desperate to play and I knew that. It was a maximum 45 minutes but you could see straight away he was comfortable.

Arsenal will now return to London and face Spanish side Sevilla at the Emirates next weekend before starting their Premier League campaign against Crystal Palace on August 5.