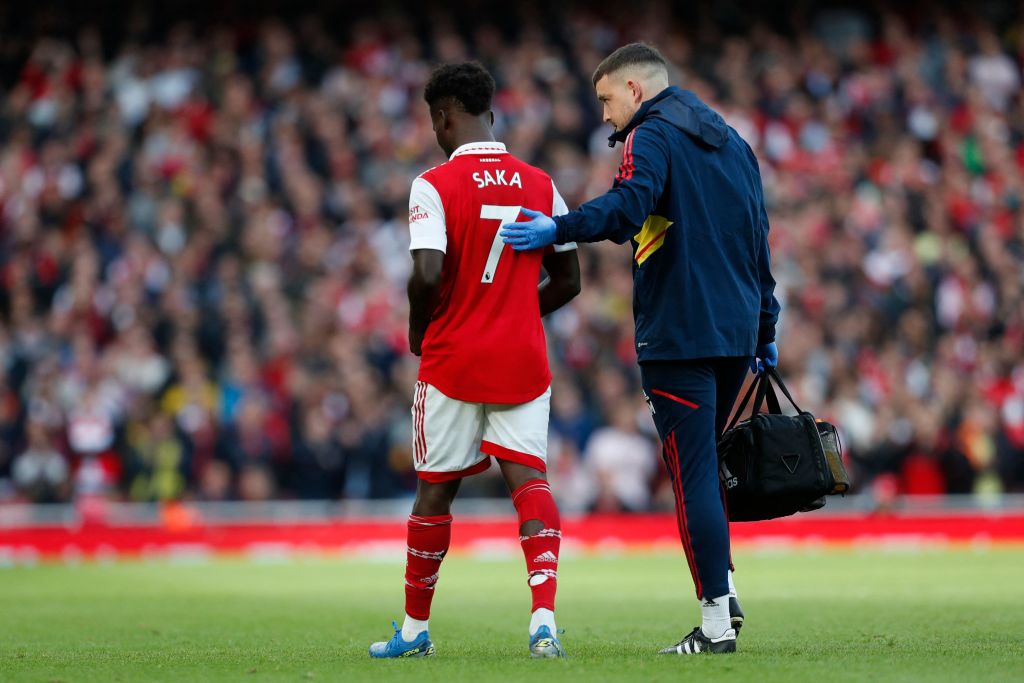 Arsenal boss Mikel Arteta has played down injury fears over Bukayo Saka and does not believe his World Cup prospects will be put under threat.

Saka provided the assist for Gabriel Martinelli’s opener inside four minutes in Sunday’s 5-0 win over Nottingham Forest but a heavy challenge from Renan Lodi left the winger needing treatment.

The 21-year-old was back on shortly after but 10 minutes later sat down again in discomfort.

Reiss Nelson was brought on for his first Premier League appearance of the season with Saka immediately heading down the tunnel after being brought off.

Arsenal and England will now face a nervous wait to learn the extent of Saka’s knock. The Three Lions officially begin their World Cup campaign against Iran on 21 November.

Speaking post-match, Arteta admitted his young star got a ‘bad kick’ but did not intially fear anything more serious.

‘Hopefully not [the World Cup in doubt],’ Arteta told a press conference. ‘It was a bad kick, he was limping but I don’t see it further than that. Both foot and ankle, he got kicked a few times.’

Nelson, who came onto replace Saka inside half an hour, would go onto have a sublime afternoon at the Emirates, scoring twice and providing an assist in the first 15 minutes of the second-half as Arsenal eased to a thrilling victory.

‘Of course, it is a huge shame for Arsenal and the nation and we will go and check now and see how he is,’ Nelson said. ‘He’s a great boy and it’s great to have him in the team.’

Arsenal have four more games before the World Cup break, hosting FC Zurich in the Europa League on Thursday before a Premier League showdown against Chelsea on Sunday.

The Gunners welcome Brighton to the Emirates for their EFL Cup third round clash on 9 November before a trip to Wolves on the 12 November.

Arteta recently dismissed concerns about Saka’s gametime, insisting he would have no qualms in in the academy graduate playing 70 games this season.

‘Look at the top players in the world, they play 70 matches, every three days and make the difference and win the game,’ Arteta said after the 1-0 win over PSV earlier this month.

‘You want to be at the top, you have to be able to do that. And if we start to put something different in the mind of a young player, I think we are making a huge mistake because then [he would] be like ‘no, I don’t play now, on astroturf I don’t play.

‘I don’t want that. I want them to be ruthless every three days. I want them knocking on my door (saying) ‘I want to play, I want to win the game.’