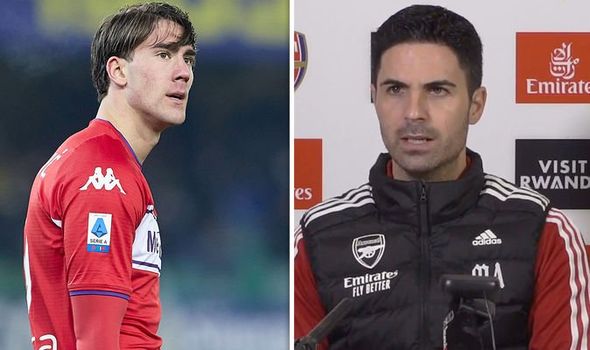 Arsenal boss Mikel Arteta insists the best players in the world want to join the club amid interest in Fiorentina striker Dusan Vlahovic. Serbia star Vlahovic is one of the most sought-after forwards in Europe currently and Arsenal want to sign him in this window. The Gunners have not qualified for the Champions League since 2016 but Arteta says the lure is still there.

Vlahovic has scored 16 goals in 20 Serie A appearances so far this season for Fiorentina.

The 21-year-old netted 33 times in 2021 to equal Cristiano Ronaldo’s record for the most goals in a calendar year in the Italian top flight.

Arteta refused to comment on speculation linking Arsenal with a move for Vlahovic at his press conference ahead of Thursday’s Carabao Cup semi-final first leg against Liverpool at Anfield.

When asked directly about the forward, Arteta said: “I’m really sorry to disappoint you but I’m not going to be discussing any transfer rumours.

“I’ve never done it and obviously I cannot do it.”

However, later in his press conference, Arteta made an exciting admission over Arsenal’s transfer business.

The former captain claimed every player he has spoken to regarding a move to north London has been interested in joining the club.

Arteta insists the world’s best are still attracted to Arsenal despite them not winning a Premier League title since 2004.

“I can say that situation hasn’t changed. Every time I have spoken to any player, they were so willing to come. I haven’t faced any other situation.

“That’s one of our biggest powers and our capacity to get the attention of people to come and join our club is something that is a big advantage for us.”

Vlahovic is out of contract at Fiorentina in the summer of 2023.

“I think if it was left to the player, he would be open to going to Arsenal,” Solhekol said.

“Mikel Arteta is building something special again at the club.”