Twelve games into his Arsenal tenure, Paul Merson and Gary Neville assess Mikel Arteta’s start at the Emirates, and the signs are currently positive.

With six wins, five draws and just one defeat, Arsenal seem to be moving in the right direction under the Spaniard, who has given the Gunners a chance of reaching the Champions League next season after taking over from Unai Emery in December.

Here, we got the views of Merson and Neville, who feel an increased defensive solidity is evident under Arteta…

Merse: Arteta a B+ so far Former Arsenal forward Merson believes Arsenal’s realistic aim is fifth or above, and grades Arteta’s start at a B+…

“Arsenal would have lost the game against Everton four months ago. You watch Arsenal now and it’s not the Arsenal of 2004. This is where Arsenal are now, so really beating Everton 3-2 is a big result.

“They’re aiming for fourth or fifth now, so that is a good result. They are harder to beat, and Arteta is getting players to try and play, like [Mesut] Ozil, [Pierre-Emerick] Aubameyang is scoring goals. They’re still open at times, but if you’re giving Arteta a grade since he got there, it would be B+. He’s doing something right. Show me someone that can run before they can walk! 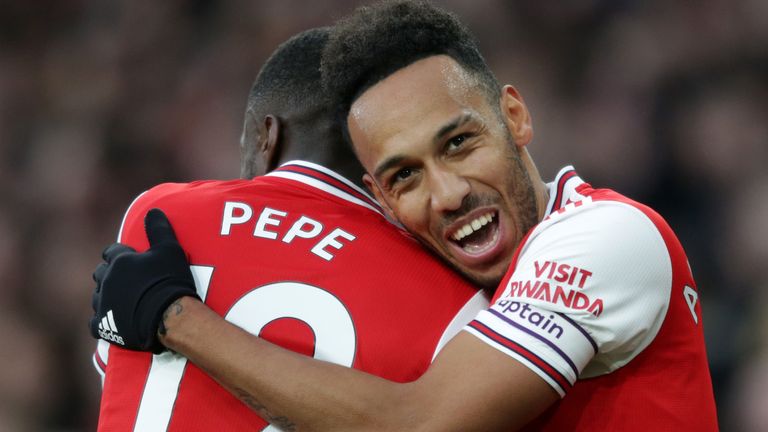 “It’s moving along steadily, and that’s the best thing for him. If he’d come in and won five games on the trot, people would have thought he is the messiah, and then all of a sudden they’d have hit a bad run, and he’d be described as a one-hit-wonder. He’s done it the right way, and it has moved along steadily.

“They’re in with a big chance of the top five, which if City are banned, means Champions League football.

“Arteta will know what he needs to change next season. It’s pointless coming in, going mad at players now, and then all of a sudden needing those players if others get injured. The players he’ll want to get rid of don’t need to know that right now. There will be some personnel changes in the summer.”

Neville: You can see the difference Sky Sports pundit Neville says Arsenal are making steps in the right direction, and Arteta is playing a style which covers up their weakenesses…

“Arsenal have threatened to be better under Mikel Arteta, with a lot of draws and perhaps they haven’t got the victories they would have wanted.

“There have been improvements in defence, up until Sunday, where they reverted to type with some really sloppy play. Everton could have scored three or four goals in that last 10 or 15 minutes.

“We always expect a bounce from new managers. You can spot the differences in Arsenal since Arteta took over. “Arteta is trying to build from a base whereby his team have been shambolic defensively all season, trying to correct that. You have to try and stop the conceding of goals initially.