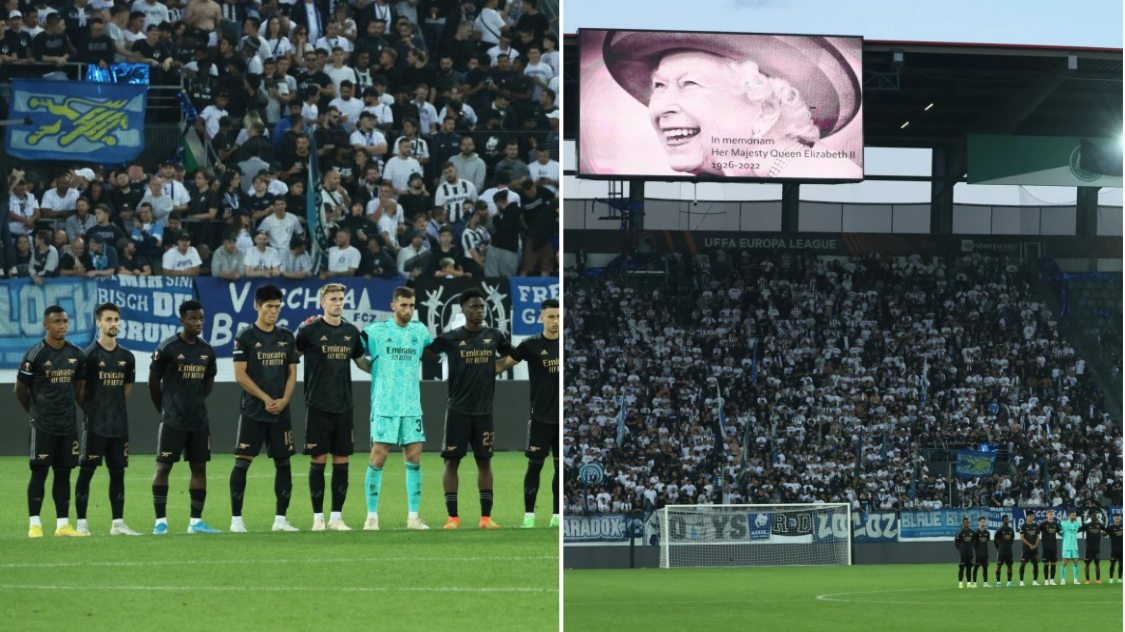 Arsenal and FC Zurich held a minute’s silence for Queen Elizabeth II following her death on Thursday but it was interrupted at the end by booing and jeering from the home supporters.

The two teams lined up around the centre circle before the start of the second half of the Europa League clash to take part in a period of silence to mark the Queen’s death.

A black and white photo of Her Majesty was displayed on the big screen, with the referee’s whistle beginning the moment of reflection.

There seemed to be shock on the faces of a number of people in the stands, many of whom would only have discovered the news of the Queen’s death via the stadium tannoy.

While the silence was largely well observed, around 40 seconds into it the home supporters appeared to become restless and started booing, jeering and whistling.

That prompted the silence to end prematurely, with the players breaking apart and taking up their positions on the pitch before the full minute had passed.

Zurich and Arsenal began the second-half with a minute’s silence to pay tribute to Her Majesty the Queen, who passed away today aged 96.

She died at the age of 96 surrounded by her family at her home in Balmoral, including her son and heir to the throne Charles, the Prince of Wales, and her grandsons, the Duke Of Cambridge, Prince William and the Duke of Sussex, Prince Harry.

Viewers were shocked by the reaction, with one Arsenal supporter tweeting: ‘Pretty outrageous of the FC Zurich fans booing the minute’s silence for the Queen.’

Another wrote: ‘Zurich fans booing towards the end of the 60 seconds of silence for the Queen… disgusting!!’

The home fans were silenced not long after, however, when Eddie Nketiah netted in the 62nd minute to give Arsenal a 2-1 lead – which proved to be the winner – after youngster Marquinhos had opened the scoring.

Manchester United, meanwhile, are due to play against Real Sociedad in their own Europa League match and have confirmed that the game will go ahead as planned with a minute’s silence to be held before kick-off.

Both teams will also wear black armbands while flags at Old Trafford will be flown at half-mast as a sign of respect.