Jose Mourinho posts a photo of him fighting off Steven Gerrard in a dig at football’s ‘ball possession’ obsession, with a throwback to Liverpool captain’s slip against Chelsea seven years ago (when the Blues had just 27% of the ball!)

Jose Mourinho would have been forgiven for taking on a low profile after his sacking by Tottenham – but the Portuguese was up to his old tricks on social media.

Taking to Instagram on Tuesday, Mourinho, seen in the photo as manager of Chelsea, is fighting off then-Liverpool captain Steven Gerrard for the ball on the Anfield touchline.

‘Anfield. April 27th 2014. Ball possession,’ Mourinho wrote, a nod to the seven-year anniversary of Chelsea beating Liverpool at Anfield to put a major dent in their 2013-14 Premier League title hopes under Brendan Rodgers. 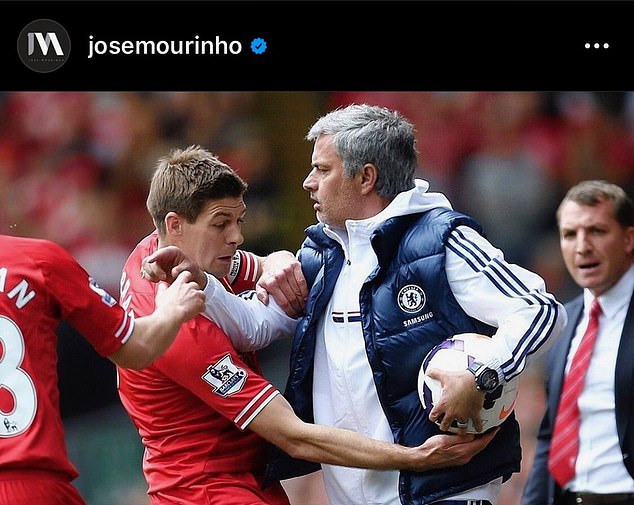 The photo shows Mourinho with the ball under his arm with Gerrard frantically trying to retrieve it in a bid to keep the tempo of the game high.

Despite Liverpool ending their wait for a league crown last season, that 2013-14 season under Brendan Rodgers see them lose control in the run-in, with a 2-0 loss to Mourinho’s Chelsea particularly damaging.

The Portuguese’s decision to use a picture of Gerrard also felt particularly pointed given it was Gerrard who unfortunately slipped as Chelsea countered to score. 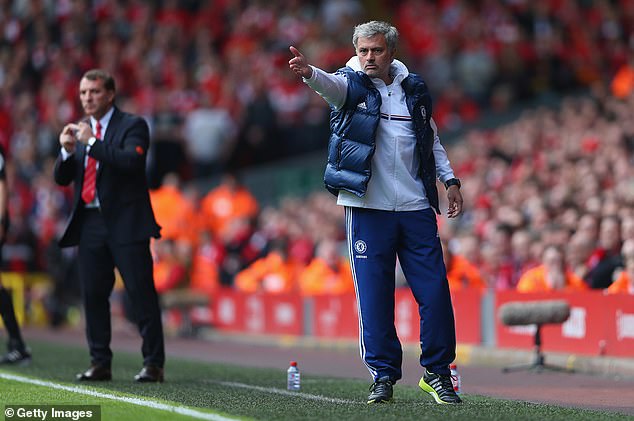 Having been caught on camera pre-match urging team-mates to ‘not f***ing let this slip’ his own words came back to bite him.

What many took away from Mourinho’s post was the sarcasm directed at English football’s obsession with keeping the ball.

On that day at Anfield his side saw just 27 per cent of the ball and still left with a clean sheet, two goals and three points.

Liverpool were on a 16-match unbeaten run prior to that game but much like Diego Simeone at Atletico Madrid, Mourinho has shown a willingness to win games without dominating possession over 90 minutes.

It is an issue that has stuck with him long after that victory at Anfield.

Back in December, while preparing for a game as Tottenham boss, he was asked about possession and its influence on matches.

‘You love the word possession and you love the stats,’ Mourinho said. 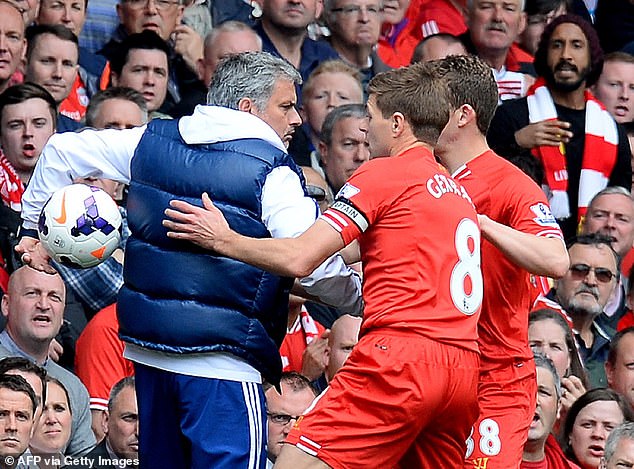 ‘It is a little bit like the efficiency of players and sometimes you say: “The stats say Player B had 92% of efficiency in his passing.”

‘So the stats many, many times are like an incredible piece of meat or fish but badly cooked. It doesn’t tell me much. What tells me [much] is the number of goals you score and the number of chances that you create.’