Kevin Muscat will take over as the head coach of Japanese side Yokohama F Marinos, replacing compatriot Ange Postecoglou following his departure to join Scottish side Celtic last month.

Muscat’s appointment was confirmed by the J-League club on social media on Sunday, although no start date was given by Yokohama due to restrictions currently in place on the arrival of foreign workers into Japan. 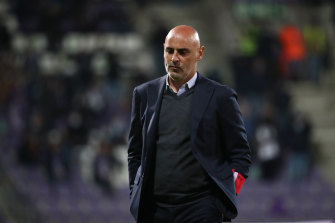 Kevin Muscat during his coaching stint in Belgium.Credit:Getty Images

The appointment was one of football’s worst-kept secrets, with sources saying in June that Muscat had been lined up to fill Postecoglou’s shoes.

The 47-year-old has not worked as a head coach since losing his job at Belgian side Sint-Truiden in late 2020, but previously enjoyed six successful years in Australia with Melbourne Victory.

Muscat replaced Postecoglou at the helm of the A-League club in 2013, having worked as an assistant coach with Victory, and led them to A-League titles in 2015 and 2018.

“Football is a journey that takes you on many twists and turns. I am still in Europe after a great 12-month experience at Sint-Truiden and I am open to all possibilities to continue my career development,” Muscat was quoted as saying in June.

Yokohama won the Japanese title under Postecoglou and are currently second on the J-League table, some 12 points behind leaders Kawasaki.

Tags: as, confirmed, Muscat, new, Yokoha
You may also like
Latest Posts