Melbourne Victory have kept their faint finals hopes alive with a dramatic come-from-behind 2-1 triumph over Adelaide United in a free-flowing encounter at AAMI Park.

The board indicating an extra three minutes of stoppage time had just been raised when the often-maligned striker Andrew Nabbout got on the ball wide on the left, cut into the area and released a thunderous strike from distance that beat Adelaide goalkeeper Paul Izzo for pace and power. 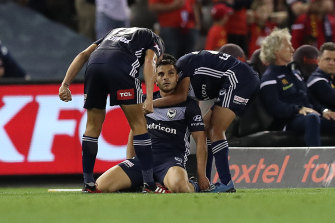 The result means Victory are still in the top-six race although they still have plenty of work to do if they are to make the play-offs.

They now have 20 points from their 19 games and are six points and more behind sixth-placed Brisbane. They would need to win virtually all their remaining seven matches and hope others slip up around them, but they can at least feel they remain in contention for another week.

In this season where so little has gone right for Victory, it was not that surprising that they got such little reward in a first half they dominated on every statistical measure but still found themselves trailing at the break.

When even a player of the calibre of Ola Toivonen is missing routine headers from inside the six-yard box then it must seem like the fates are ranged against you.

Victory had enough shots and attempts on goal to have given themselves a comfortable advantage and rekindle their faint finals hopes.

Instead it was Adelaide who led thanks to an excellent seventh-minute strike by Kristian Opseth, their Danish striker, who curled his shot round Lawrence Thomas after he had been set up by the impressive Riley McGree's pass.

Victory's effort could not be faulted. Straight away livewire winger Elvis Kamsoba made space well for himself and pulled a pass back for Migjen Basha, but the midfielder's shot was wide. 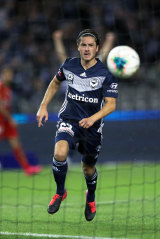 Marco Rojas was back on the scoresheet for Victory on Saturday night.Credit:AAP

Marco Rojas, starting his 100th A-league game, then intercepted a stray pass and made a great run down the Reds' left flank but none of his teammates could get on the end of his cutback.

Nabbout spurned an excellent chance to level when his point-blank volley from Tim Hoogland's cross was saved by Izzo.

Victory kept coming. Centre-half James Donachie blasted just wide when Toivonen's free kick cannoned off the wall and then Leigh Broxham's heavy touch meant he could not get enough direction on his shot when he was set up by Kamsoba.

Still Adelaide were dangerous on the break, and Thomas was lucky to only be shown a yellow card when he raced off his line and brought down McGree outside the area.

Victory's energy and desperation was creating opportunities, their frenzied finishing denying them any reward.

Toivonen then missed an easy chance just before the half-time whistle when Kamsoba's deflected shot was headed back across goal by Adama Traore, leaving the Swede unmarked with just Izzo to beat.

George Blackwood almost doubled Adelaide's lead with a thumping drive which came back off the crossbar but Victory did get the leveller their pressure deserved in the 57th minute and it was Rojas who struck, scoring for the first time since rejoining the club.

The Kiwi winger got on the end of a cross from Hoogland, beat off a challenge and drove at pace past Izzo to give his team hope that its season was not coming to a premature end.

Blackwood once more was denied by the woodwork and the game looked to be heading for a draw – until Nabbout's dramatic late intervention.