Czech Republic stunned 10-man Netherlands to reach the quarter-finals of Euro 2020 with a superb 2-0 win in Budapest.

The Dutch were put on the back foot 10 minutes into the second half when Matthijs de Ligt was shown a red card after handling the ball which the officials deemed was denying a clear goalscoring opportunity.

Tomas Holes then made them pay 13 minutes later when he headed home from close range following a brilliant nod back across goal from Tomas Kalas.

And the Czechs made sure of the victory in the 80th minute when Patrik Schick swept home from close range to grab his fourth goal of the tournament.

Here are all the player ratings from the match. 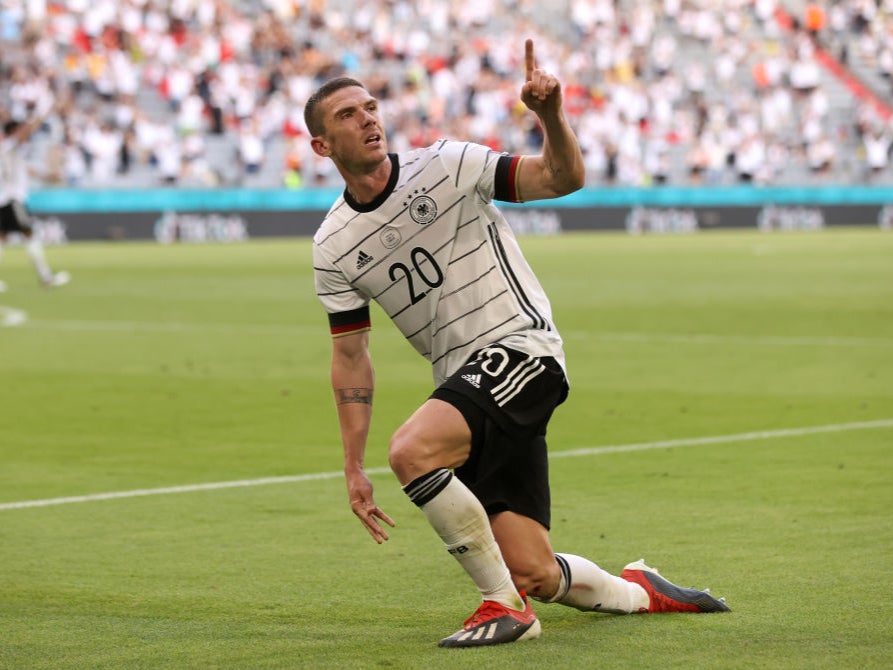 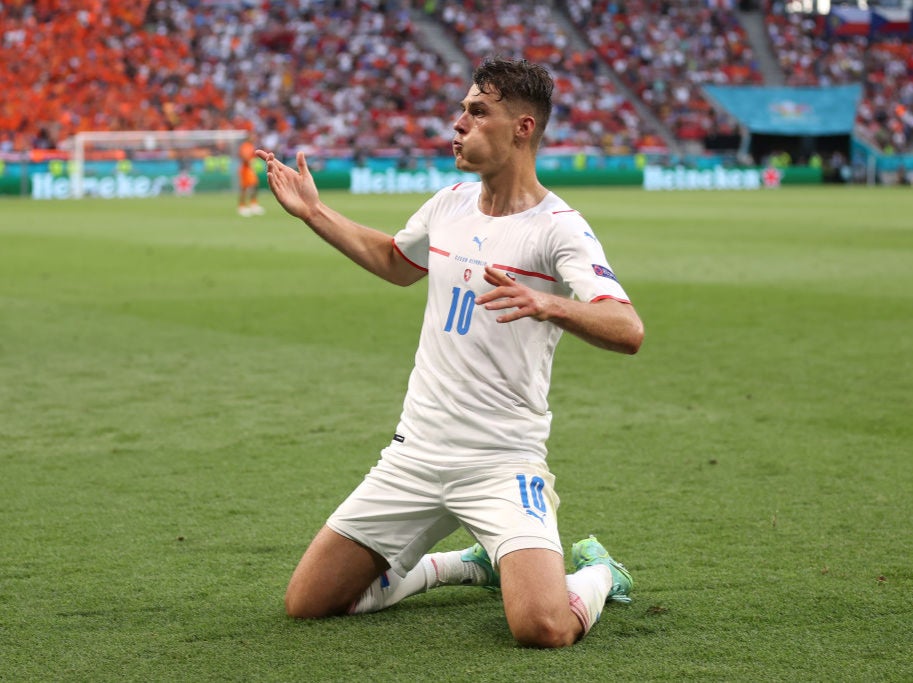 Maarten Stekelenburg – 6: Had very little to do until his side went down to 10 men. Couldn’t do anything about the goals, but made a good save from a one-on-one chance late on.

Stefan de Vrij – 6: Clearly the least confident on the ball out of his team’s back three. Does the simple things well and did cope OK with the Czechs attacks on the left.

Matthijs De Ligt – 4: Produced a sensational last-ditch tackle to deny Barak in the first half when it looked a certain goal. Cost his side with two dreadful errors, falling over and then deliberately handling the ball which earned him a red card.

Daley Blind – 5: Did struggle to deal with the attacking threat of Czech Republic down the right, but was not helped out by the defensively poor Van Aanholt.

Denzel Dumfries – 7: The standout player again for the Netherlands. The ground he covers down the right is absolutely extraordinary. A constant threat in the first half, but the movement in the penalty area from the traditional forward players meant his deliveries were – through no fault of his own – largely wasted.

Marten De Roon – 6: Goes unnoticed in Netherlands’ team but did not do a great deal wrong when shielding the back three as De Jong and Wijnaldum went roaming.

Frenkie de Jong – 6: Didn’t stand out in the middle of the pitch as much as he did in Netherlands’ group games. Often struggled to deal with the industry of Soucek and Holes.

Georginio Wijnaldum – 5: Didn’t look at the races in the first half. Was nullified with relative ease by Holes and Soucek as the space in between the lines did not appear to be there for him.

Patrick van Aanholt – 5: Was a willing runner in the final third but looked far more suspect defensively than Dumfries on other side. Could not deal with Coufal and Masopust on the right who found space to cross time and time again.

Donyell Malen – 6: Looked very bright in the opening 20 minutes and then danced through in the second half, only to be outfoxed by keeper Vaclik when one-on-one. Subbed shortly after the sending off.

Memphis Depay – 5: Executed a delightful bit of skill in the first half to give Van Aanholt a gilt-edged chance which he skewed wide. Faded awfully in the second half. 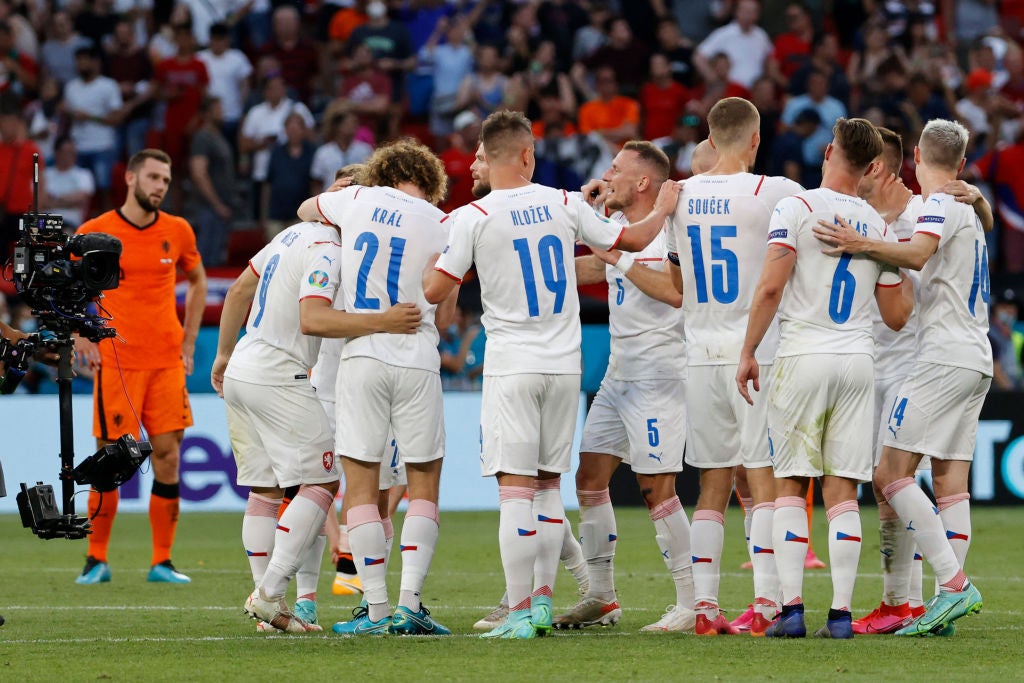 Tomas Vaclik – 7: Did brilliantly to deny Malen in the second half when faced with a one-on-one. Commanded his box well when high balls were thrust into the box.

Vladimir Coufal – 7: Gave the Czechs a real threat down the right as he linked up superbly well with Masopust. Had some issues with Malen but managed to cope with Van Aanholt doubling up on him.

Ondrej Celustka – 7: Had a rather concerning opening 20 minutes up against the lively Depay and Malen. But he then got to grips with the movement and came on very strong, looking commanding and dogged in the second half.

Tomas Kalas – 9: Both he and Celustka were superb at controlling the Dutch attack. Also produced a wonderful header across goal to set up Holes’ winner. Barely put a foot wrong throughout the game.

Pavel Kaderabek – 6: Was made to look a little out of his depth up against the marauding Dumfries. Also had a chance to put Czech Republic in front midway through the second half but his effort was blocked by – you guessed it – Dumfries.

Tomas Holes – 9: Truly superb. Impressive in marshalling the defence and given a bit more licence to go forward once De Ligt was sent off. Scored the opening goal with a poacher’s header and set up the second.

Tomas Soucek – 8: A box-to-box midfielder Czech Republic would be lost without. Put the hard yards in and then also drew Netherlands defenders away with his late runs into the box which we are so accustomed to seeing from him in the Premier League.

Petr Sevcik – 7: Did not get too many opportunities to attack down the left as the majority of Czech Republic’s attacks came on the other side. Worked tirelessly to offer protection to Kaderabek but did struggle with Dumfries.

Antonin Barak – 7: One of the quieter Czech players in the first half, particularly in the final third. Did get the upper-hand when faced up against De Roon on a couple of occasions in the second period. His movement caused Netherlands major problems as the game went on.

Lucas Masopust – 8: Linked the play between the midfield and Schick well and, along with Soucek, was a willing runner beyond the Czech striker.

Patrik Schick – 8: Was impressive in the first half with his clever runs and strength, shrugging off defenders and causing problems. Provided some decent hold-up play and clearly has a good understanding with Barak and Masopust. Netted his fourth of the tournament to seal victory with a neat finish.