New Barcelona signing Martin Braithwaite had an ideal start to his career with the club by providing two assists in a 5-0 drubbing of Eibar on Saturday and has already decided how he wants to remember the occasion – by never washing his shirt.

Lionel Messi was already on three goals when Braithwaite came off the bench two days after completing a surprise move from La Liga strugglers Leganes and the Denmark international soon helped the Barca captain get his fourth goal. 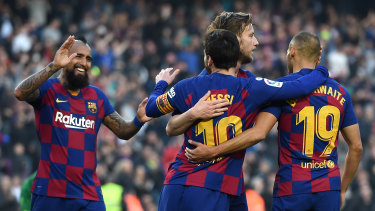 The 28-year-old beat a defender before sending a diagonal pass towards Messi, who teased his way past Eibar's goalkeeper Marko Dmitrovic to make it 4-0 before congratulating his new teammate.

"I won't wash my clothes after I hugged Messi," Braithwaite told reporters.

"He congratulated me, he's a great guy and tried to make me feel comfortable on the pitch by passing to me often. I'm very happy to have given my first assist to Leo."

Braithwaite was not far from marking his first appearance for Barca with a goal in the final few minutes of the game, firing a shot at Dmitrovic which the goalkeeper parried into the feet of Arthur Melo who tapped into the empty net.

"I feel bad for not having scored but Dmitrovic did very well," added Braithwaite.

"It was an extraordinary debut, a dream come true. When the coach called me to warm up I was a bit nervous but looking forward to getting on. I feel very good here, I'm surrounded by fantastic players."

The Catalans will enter next weekend's clasico against Madrid at the Bernabeu with a two-point advantage – and a one-goal edge all-time in La Liga over their bitter rivals 6151 to 6150.

Before the clasico, Barcelona and Madrid have round-of-16 matches in the Champions League.

Messi's goals cheered fans who began the match waving handkerchiefs and calling for Barcelona president Josep Maria Bartomeu to resign after the club was embroiled in a scandal involving a firm hired to monitor coverage of the team on social media. 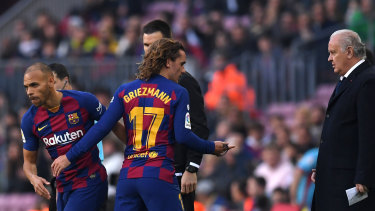 Messi indicated he was unhappy with those who run Barca in an interview with newspaper Mundo Deportivo on Friday in which he defended his recent outburst against sporting director Eric Abidal and said the team had faced "problem after problem".

He had also questioned the strength of the Barcelona side, who he claimed were not strong enough at the moment to challenge for the Champions League.

Tags: B, new, not, signing, to, vows, wash
You may also like
Latest Posts