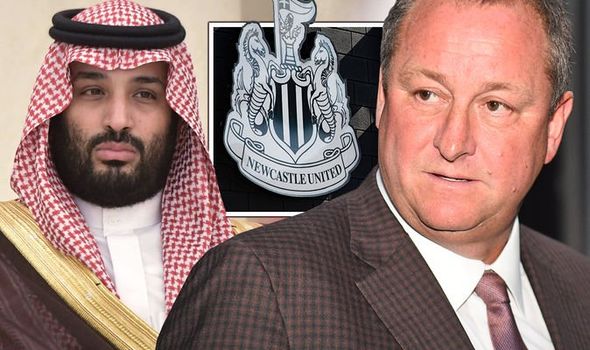 Mike Ashley has completed the £300million sale of Newcastle United to a Saudi Arabia-backed consortium, ending his 14-year tenure as the club’s owner. This week, the takeover took a significant step forward after a considerable obstacle was removed, and the parties have concluded negotiations quickly.

British businesswoman Amanda Staveley and the Reuben brothers – David and Simon – have equally split the remaining 20 per cent.

Ashley, detested by the Newcastle fanbase, was desperate to sell the club amid what looks set to be a relegation battle this season.

He was dealt a blow last year when the buyers walked away from a deal after the Premier League demanded clarification over who would have control of the club.

JUST IN: Steve Bruce contract clause could save him from Newcastle sack

Ashley opened arbitration proceedings scheduled to occur early next year, but they will no longer be necessary.

One of the change in ownership’s biggest obstacles was tensions between Saudi Arabia and Qatari-based media company, BeIN Sports.

BeIN had its streams hijacked by Saudi-based pirates, leading to a legal dispute between the two states.

Saudi Arabia had implemented a four-year ban on BeIN Sports as the row continued, even after the culprit, beOUTQ, was shut down in 2019.

But the Arab kingdom is now in talks with BeIn, with confidence the two parties will reach a settlement.

Resolving the issue made objections almost impossible to sustain, leading to the takeover successfully going through.

A Premier League statement read: “The Premier League, Newcastle United Football Club and St James Holdings Limited have today settled the dispute over the takeover of the club by the consortium of PIF, PCP Capital Partners and RB Sports & Media.

“Following the completion of the Premier League’s Owners’ and Directors’ Test, the club has been sold to the consortium with immediate effect.

“The legal disputes concerned which entities would own and/or have the ability to control the club following the takeover.

“All parties have agreed the settlement is necessary to end the long uncertainty for fans over the club’s ownership.

“The Premier League has now received legally binding assurances that the Kingdom of Saudi Arabia will not control Newcastle United Football Club.

“All parties are pleased to have concluded this process which gives certainty and clarity to Newcastle United Football Club and their fans.

Clubs are worried Newcastle will look to spend at will, as Manchester City have, to become a leading force in England and Europe.

Meanwhile, the ruling body has come under increasing pressure from human rights organisations amid fears over the state’s appalling record.

The PIF has insisted Newcastle will be an investment and not a Saudi vanity project in response to concerns that the owners will look to rival Abu Dhabi’s expenditure in Manchester.

The hard work starts now and will likely include replacing Steve Bruce as manager and investing in the playing squad in transfer windows to come.

Tags: autoplay_video, ctp_video, Newca
You may also like
Latest Posts