Mitch Langerak insists he has no regrets about his premature retirement from international football and says he won’t reverse his decision after watching fellow goalkeeper Andrew Redmayne’s unorthodox methods get the Socceroos into a fifth straight World Cup.

Langerak has been Australia’s most in-form custodian over the last few years, shattering record after record for Nagoya Grampus in the J.League while the nation’s usual number one and skipper, Mat Ryan, has struggled for regular minutes at club level. 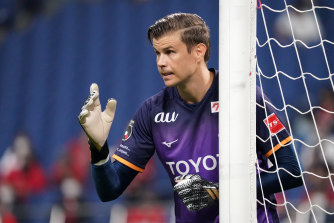 Mitch Langerak has been breaking record after record in Japan but isn’t available for Socceroos selection.Credit:Getty

But the 33-year-old eased coach Graham Arnold’s selection headache last year by making the tough call to step back from international duty, citing Japan’s tough coronavirus restrictions and his unwillingness to be apart from his young family while serving repeated stints in quarantine.

That stance won’t change, Langerak told the Herald, even after Australia’s fraught qualification campaign for Qatar 2022 ended with a euphoric penalty shootout win over Peru last month, plus the subsequent loosening of COVID-19 rules in Japan, which still isn’t open to tourists but has allowed footballers to travel in and out with relative ease.

Nor does Langerak have any green and gold FOMO, having made peace with life as a Socceroos fan, despite being more than good enough to challenge Ryan for a spot in Australia’s first-choice team.

“I reckon I woke up half my apartment complex,” Langerak said of his reaction when Australia beat Peru 5-4 on penalties. 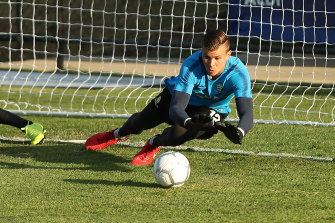 Mitch Langerak has made only a handful of Socceroos appearances despite a career that continues to blossom at club level.Credit:Getty

“Celebrating at four, five in the morning, watching the boys, sending off messages congratulating everyone, the staff, the players – when you’re involved in the Socceroos, it does become a family. You have this connection to people from being involved in it.

“I came into the club the next day and everyone was congratulating me, buzzing, absolutely frothing – it was like I was actually there. Obviously, it was huge for Australian football, huge for all the guys and everyone who was involved.”

Earlier this year, when the Socceroos’ World Cup fate looked precarious and Ryan was on the outer at Real Sociedad, ex-Australia goalkeeper Mark Bosnich said Arnold should have been on the phone to Langerak to convince him to make himself available again. 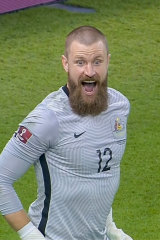 Goalkeeper Andrew Redmayne may have booked his spot at the World Cup as a shootout specialist.Credit:Network 10

It seems unlikely Ryan will break into the La Liga side’s first team this season, while his recent back-up in the Australian squad, Danny Vukovic, is 37 and hasn’t played a single minute in the Eredivisie for Dutch side NEC Nijmegen since signing for them last year.

Redmayne, on the other hand, may well have earned a spot on the plane to Doha as the Socceroos’ penalty specialist, should another shootout eventuate. Otherwise, Langerak would easily walk into Arnold’s 26-man squad for the World Cup, which begins in November, if not start all three group games against France, Tunisia and Denmark if his form stays true.

Asked if he could change his mind between now and then, Langerak said: “I’ve retired.”

“With the way everything was, I had to make a decision that was best for me. No regrets. I’m absolutely stoked for the boys, to qualify for the World Cup. I’ve got high hopes that they’ll go to the World Cup and shock a few people.

“We played against [Japan-based] Adam Taggart a couple of days ago … what they had to go through in the last two years in terms of coming in and out of Japan, it was brutal. For me, that was the right decision. It wasn’t easy, but you have to do what you have to do.”

Langerak has previously left the door ajar for a recall should the Socceroos face a goalkeeping emergency through injury or illness, but barring a significant shift in mindset or circumstances in the coming weeks, it appears he won’t be adding to his eight international caps.

Last year, Langerak kept 18 clean sheets in 28 games for Nagoya Grampus, one of Japan’s biggest clubs – breaking his own J.League record set in 2020. His performances, he says, have gone to “another level” since his move to Japan, where he is likely to see out his club career.

But he has no concerns over Australia’s stocks in his position without him, noting Ryan’s ability to consistently defy his lack of club action whenever he pulls on the No.1 jersey.

“Maty’s done really well, and over the course of the whole qualifying campaign as well – he’s probably been our best player, I reckon, and particularly not playing regularly at Sociedad, it’s an added challenge to come in and bring that level,” Langerak said.

“Honestly, something I’ve always said about Maty is I can’t remember him making a mistake while wearing a Socceroos jersey. That’s huge. All goalkeepers, you look at players who can do that and you just tip your hat – that’s awesome, well done. That’s mental strength, concentration, resilience. That’s a real talent to be able to do that.”