The absence of three of Sydney’s best defensive players was barely noticed by the defending A-League champions as they extended their winning streak to four with a gritty 2-0 win over Brisbane Roar on Saturday afternoon in Redcliffe.

A first half goal by Kosta Barbarouses and a last minute strike from Harry Van der Saag split the two sides but it was the performance of stand-in goalkeeper Thomas Heward-Belle that was the greatest source of optimism for Sydney in their last match before finals. The youngster produced three excellent saves in his season debut, filling-in for the absent Andrew Redmayne with enough conviction to maintain his club’s confidence of finishing the season with silverware. 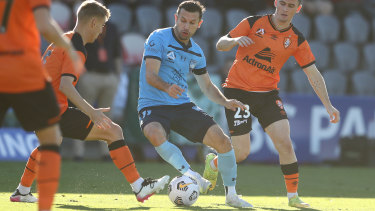 Kosta Barbarouses opened the scoring for the Sky Blues.Credit:Getty

Redmayne was one of three Sky Blue absentees, along with defenders Ryan McGowan and Rhyan Grant, on international duty but those departures caused little disruption to the league’s best backline.

If anything, it showed Sydney’s depth. One of those deputising, Paulo Retre, created the opening goal of the match. Starting at right back in place of Grant, Retre played a clever ball over the top of Brisbane’s defence to put Barbarouses into space. He drove in from the right flank and unleashed a powerful finish from a tight angle that flew into the far corner of the net.

The Sky Blues defense remained solid in the absence of their three Australian internationals. They restricted Brisbane to no clear chances in the first half hour until an individual move from Brisbane’s Dylan Wenzel-Halls tested Heward-Belle. His curling shot looked destined for the top corner until the Sydney FC keeper tipped the shot wide.

In attack, Barbarouses continued to cause problems for Brisbane out wide but central figures of Bobo and Adam Le Fondre were starved of service before half-time.

Brisbane threw numbers forward in a more attacking strategy after the break as Sydney appeared content to control the game without over exerting themselves ahead of the finals.

Midway through the second half, Sydney's approach should have been punished. A momentary lapse in concentration allowed Riku Danzaki through on goal but the Japanese spurned his one-on-one, hitting the outside of the net from close range.

A strike with the last kick of the ball from substitute Van der Saag sealed Sydney’s 2-0 win, the youngster finishing at the far post. The scoreline perhaps flattered the Sky Blues on the balance of play.

Meanwhile, Macarthur FC missed the chance to book a home finals match after losing 3-0 to Wellington Phoenix on Friday night. The Bulls will finish in sixth place but will be without French midfielder Loic Puyo for their finals clash next weekend after he was sent-off midway through the second half against the Phoenix.

Tags: 'No, Socceroos, worries, youn
You may also like
Latest Posts