Corry Evans will miss out due to injury but his brother Jonny is expected to be fit for the winner-take-all clash – which is free-to-air on Sky Challenge.

And Carroll – who was in the squad that reached Euro 2016 – says the availability of players like Evans is a major plus for such a high-pressure occasion.

He told Sky Sports: “Jonny Evans is a leader in the team, he talks, he gives good information to the players around him.

“It is great to see Jonny back and hopefully he is 100 per cent ready to go on Thursday.

“I think the likes of Jonny Evans and Steve Davis make a big difference.”

It will not be a full house at Windsor Park but a total of 1,060 supporters will be allocated socially distanced seats in the 18,500 capacity stadium.

Carroll added: “We only have just over 1,000 fans on Thursday, so it is going to be a difficult game, and I don’t think we have an advantage playing at home.

“You normally have 19,000 fans at Windsor Park singing – and you are going to miss that. But I think the players know what this game is all about

“It is a one-off game and I think every single one of those players will be ready for it.”

One of those players will be Middlesbrough’s Paddy McNair and he says the mood in the Northern Ireland camp is very upbeat.

“I just want it to be Thursday night already to be honest,” he said. 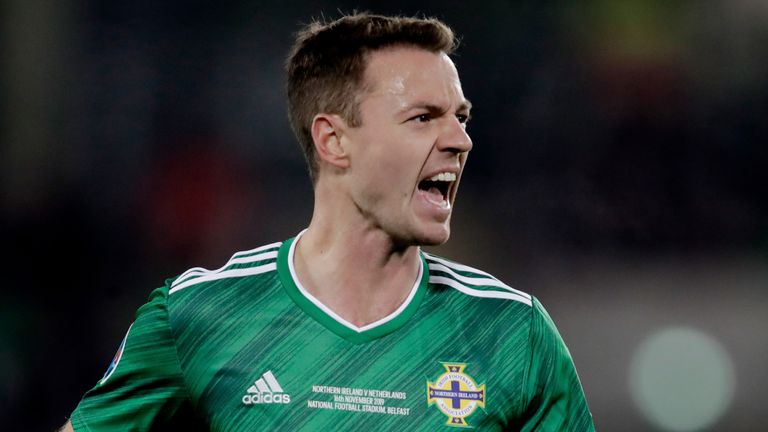 “Obviously Slovakia are a good team but, at the same time, so are we – and we definitely believe we can go and win on Thursday night.

“One game to get to the Euros, it’s an unbelievable opportunity. Four years ago we had a similar situation against Greece and we played so well on that night.

“If we could have a similar performance to that, it will definitely stand us in good stead.

“If I could choose, I would love there to be a full house, but obviously with the current situation that’s not possible.

“I’m sure the 1,000 there will make plenty of noise and I am really looking forward to it.”

Tags: Ireland, Northern, Slovakia, vs
You may also like
Latest Posts

Stokes: "We have our sights set on history – I want to step up and play my part"

NFL Hot or Not: Taysom Hill's polarizing power and the Carson Wentz conundrum
Recent Posts
This website uses cookies to improve your user experience and to provide you with advertisements that are relevant to your interests. By continuing to browse the site you are agreeing to our use of cookies.Ok