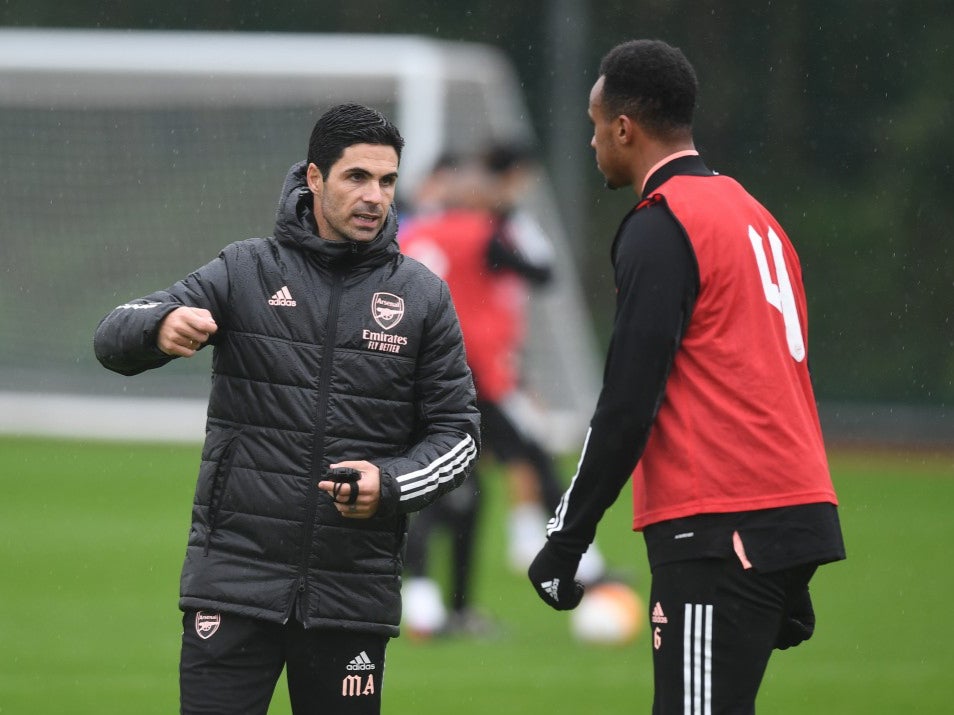 Arteta’s Arsenal have appeared cautious so far this season

The response from many around Arsenal is that you wouldn’t see Guardiola with a squad so limited. Many insist this is part of the rationale.

There is admittedly a wider context to what Arteta is trying, which ties into one of the defining themes of the Premier League season so far. Arsenal are yet another side struggling for balance between defence and attack, trying to find an equilibrium in a campaign that has been so off-kilter.

The Basque has just decided to lean towards the back, rather than the front.

If this seems to go against his principles, many around the club say it is about putting in the foundation for them, and increase a deeper confidence among the squad.

“Confidence”, after all, is a word that Arteta uses a lot. He feels it first comes from solidity.

The danger with Arsenal’s disparate talents up front is they can’t yet execute the approach he wants, which would just leave them exposed if he emphasised the attack.

The frustratingly talented Nicolas Pepe is almost a case in point, since the feeling is he isn’t yet “plugging in” to what Arteta wants. He is just one of a few.

Most damagingly, opposition defences have learned to try and shuttle Pierre-Emerick Aubameyang out to areas where he can’t do the same level of damage, greatly subduing a lot of Arsenal’s attacking threat. They thereby become dependent on wide attackers who know exactly when to cut in.

This is also where Arteta’s wider approach is so relevant, and Willian’s recent comments so pointed.

“The positional game doesn’t mean that you have no freedom on the pitch,” the Brazilian said this week. “You have the freedom to move, but many times you have to respect the position, what the coach asks, the instructions, understanding that it’ll be better for the team. It may happen you don’t touch the ball and get frustrated, but Mikel always says ‘wait, the ball will arrive’. I’ve been learning a lot.”

That is what it is ultimately about: learning.

The ideal is that players eventually know their position and role so well that they execute it instinctively, performing at a pace that opposition sides can’t live with.

In that sense, the principles are probably closer to Mauricio Pochettino’s interpretation of the approach than Guardiola’s.

It just isn’t yet ingrained in this squad. Until Arteta has that deeper understanding – and, possibly, more players capable of executing it – he will lean towards underlaying the team with solidity.

It is a more cautious approach and means that, rather than fully convincing displays, Arsenal are likely for some time to be a team of moments.

Tags: and, enoug, enough, not, shots
You may also like
Latest Posts