OLIVER HOLT: Football management is more precarious than it ever was and Neil Warnock knows the axe has no respect for age or for records after getting sacked in his 1,603rd game… what he’s done is one of our national sport’s greatest achievements

It is Tuesday night under the lights at Kenilworth Road. Neil Warnock doesn’t know it yet but it is the start of one of the happiest and saddest weeks in his football life.

Even the longest career in English football management has never hit highs and lows like this before. It is, at least, a good way to start. It feels like a throwback night, vital and visceral and vivid. The kind he thrives on.

It feels like a lot of things the Premier League has lost. It feels raw and passionate. It is raucous and loud, louder than most top-flight stadiums, even though there are only 9,790 people in the old ground. This is Warnock’s world. This is where he has lived, breathed and ranted for most of the 1,603 games as a manager that have been his life’s work. 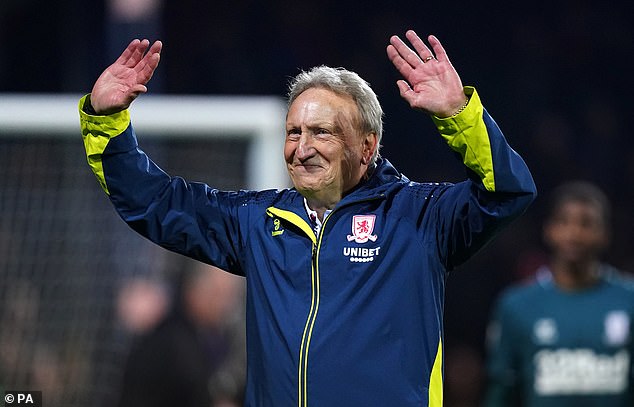 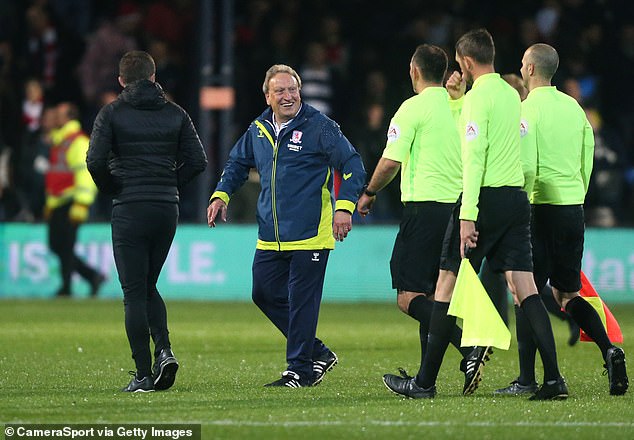 The floodlight glare lights up the terraced streets packed around Luton Town’s home. The advertising hoardings do not blink or flash or slide or change. Instead, they reflect investment from the local community.

There are signs for a firm of solicitors, an insurance broker, a taxi firm, a builder’s yard and the University of Bedfordshire. The fans pound on the wooden boards of the main stand when Luton go forward and the noise sounds like the beating of football’s heart.

One thousand or so of Middlesbrough’s travelling fans are behind one of the goals. Their young forward, Josh Coburn, who is 18 and making his first start for the club, has scored to put them ahead.

Warnock tells him later that both of them will long remember this day that came at opposite ends of their careers. The visiting fans enjoy themselves. ‘Luton’s a s***hole,’ they sing, ‘I want to go home.’

Warnock is on the far side of the pitch, standing, arms folded, in front of the Middlesbrough bench, alongside his long-time assistants Kevin Blackwell and Ronnie Jepson.

When he likes people, he is loyal and takes them with him from club to club if he can. Sol Bamba, one of his stalwarts at Cardiff, discarded by the Welsh club after he recovered from cancer, is playing in the heart of Warnock’s defence.

Warnock will be 73 next month but he does not sit down once in 90 minutes. Now and again, he sidles a few yards up the touchline to mutter something into the ear of the fourth official. 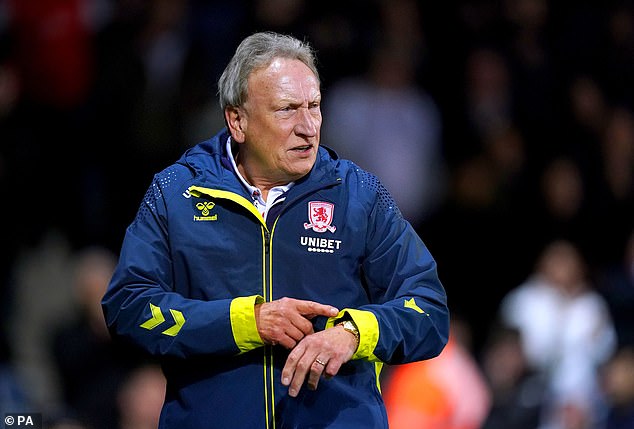 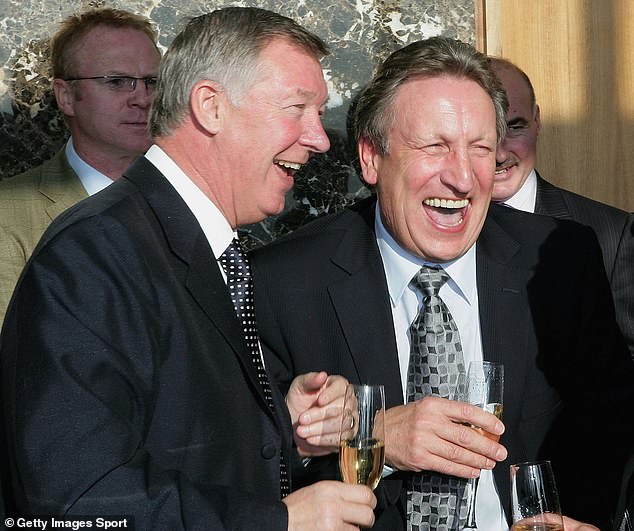 He does the same with the linesman, who he has identified as a problem after a decision did not go Boro’s way. He likens him later to Eddie Smart, a linesman who failed to flag for Cesar Azpilicueta’s late leveller in a Cardiff game against Chelsea in 2019. Not that Warnock holds grudges.

This match, number 1,602, puts him clear of the field as the man who has managed more English league matches than any other manager in history.

Dario Gradi is second now on 1,601, Sir Alex Ferguson a little further back on 1,503. ‘I don’t think anyone will beat it,’ Warnock says after the game. Even though Steve Bruce and David Moyes have just reached 1,000 games in league management, Warnock, who has managed 14 league clubs, is probably right.

Three managers were fired on the same day last month to usher in this year’s sacking season, Nuno Espirito Santo at Tottenham, Markus Schopp at Barnsley and Neil Cox at Scunthorpe. Bruce was fired a few days earlier and Daniel Farke was axed by Norwich on Saturday night.

Dean Smith is under pressure at Aston Villa, as is Rafa Benitez at Everton and Ole Gunnar Solskjaer at Manchester United.

Management is more precarious than it ever was. Warnock is about to discover that the axe has no respect for age or for records. There is no fanfare at Luton. What Warnock has done is one of our national sport’s greatest achievements. 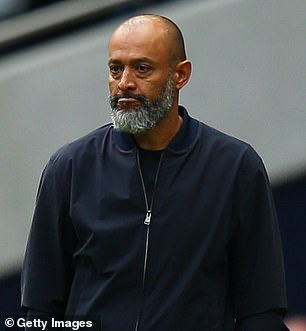 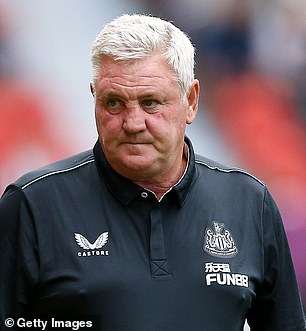 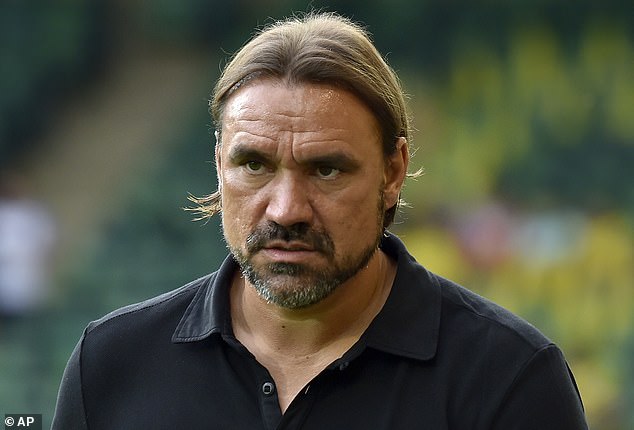 But this is England and he has always been steadfastly anti-establishment and unfashionable. And divisive. So there is nothing. ‘If it was somebody famous, they would be raving about it,’ Warnock says the next day. ‘They forget I did seven years in non-League before I got into the Football League too.

‘That would put me on about 2,000 games. My wife, Sharon, was on about it the other week. She was saying there was no chance of me ever getting any letters after my name. Then again, she says it’s always “me, me, me” with me. She says if I ever did Mastermind, my specialist subject would be “Neil Warnock”. She’s probably right about that.’

The half-time whistle blows. Boro are still 1-0 up but Warnock is not happy. In fact, he is livid. Of course he is. Livid is his default setting when he is on the touchline.

He marches straight over to the referee and harangues him. He walks off with him, striding alongside him, gesticulating at him. He keeps up the tirade all the way to the tunnel and only then does he pause. The Luton fans scream at him.

It is a wall of noise. ‘W*****, w*****, w*****,’ they shout, over and over again. Warnock told me a few years ago he hoped that was what crowds would sing at the nation’s grounds to pay tribute to him when he dies. He would rather that, he said, than a minute’s silence. 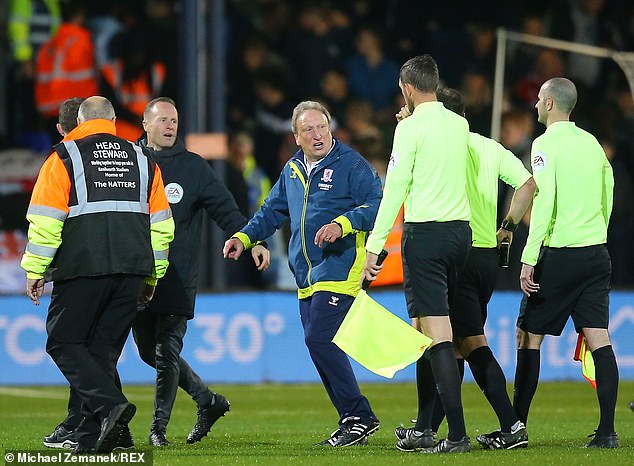 Of all the greats, all the brilliant men who have managed football clubs in this country, what is it about him that has allowed him to take charge of more games than any of them?

Warnock always goes back to the feeling of rejection he felt when he was released by Jimmy McGuigan, his first manager at Chesterfield, and how the desire to prove himself has never left him since.

He says he is driven, too, by wanting to please people he likes, men like Steve Gibson, the Middlesbrough chairman, and Simon Jordan, when he owned Crystal Palace, and Mehmet Dalman, the Cardiff chairman. And he wants to please the fans too.

‘There’s nothing better than when the whistle goes and you have won and you know you are sending everyone home happy,’ he says.

Tonight, it is the Luton fans who go home happy. The home team score three goals in five minutes in the second half to ruin Boro’s hopes of moving into the play-off places.

It will become apparent the defeat has sealed Warnock’s fate. 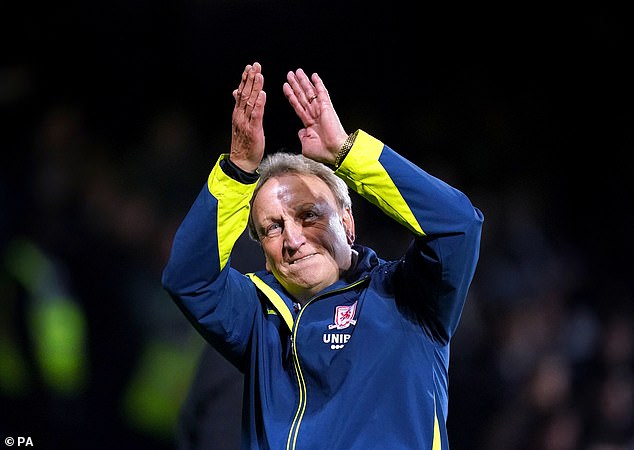 When the final whistle blows, Warnock wanders over to the away end with his players to thank the travelling fans ahead of their long journey back to the North-East.

Then he walks back towards the tunnel. ‘Warnock, Warnock, you’re a c***,’ the Luton fans sing delightedly. Warnock stops again and looks up at them. This time, he smiles and starts to applaud them.

And then a strange thing happens. The Luton fans stop chanting and start to applaud him too. And the applause goes on and on.

On Friday, Warnock finds out by reading the Daily Mail that his job is under threat if Middlesbrough lose to West Brom the next day. Gibson rings him before the match to tell him that when the 90 minutes are over, he is out.

Chris Wilder is said to have been lined up to be his replacement. In his 1,603rd game as a league manager, Middlesbrough gain a creditable 1-1 draw at The Hawthorns. 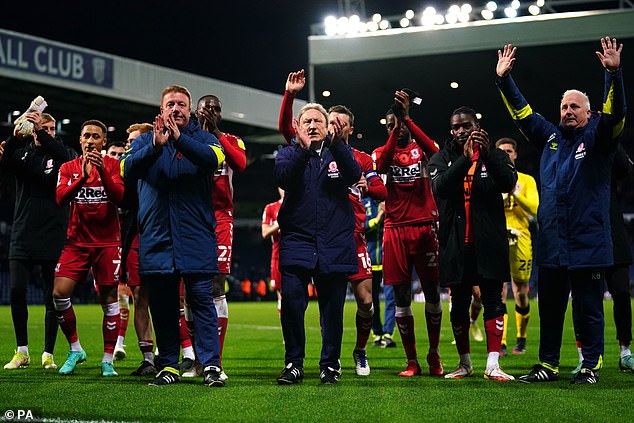 On Saturday, he said his goodbyes after being handed the axe after a draw against West Brom

Suddenly, the sound of Tuesday’s applause has faded away. Sharon breaks down in tears when he rings her to tell her what has happened.

Maybe, finally, Warnock’s race in management is run. Maybe, so soon after he took his place in the pantheon, this is the end.

In the press conference after the match, someone asks him whether he would consider taking charge at another club, maybe one struggling to avoid relegation, maybe one that needs a boss until the end of the season. He doesn’t say no.

The law of averages says that even Levy is going to get something right sooner or later and he deserves credit for appointing Antonio Conte. Next comes the tricky part.

Levy has handed him a moribund team and, even though Conte will improve it, he will need funds to challenge for the top four. Whether Levy is able, or willing, to provide them remains to be seen. 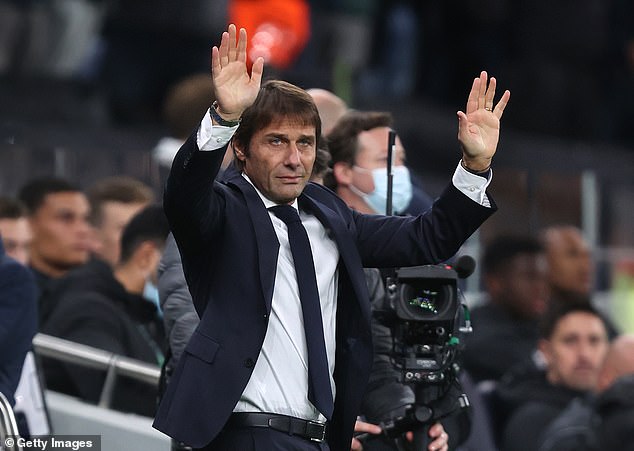 At the heart of Newcastle United’s graceless reaction to Unai Emery’s decision not to become their new manager, there was a sense of disbelief that anyone could be downright stupid enough to turn down all that loot.

The only way the new Saudi regime seemed able to compute it was by suggesting Emery’s reason for rejecting them was that he wanted more cash.

The idea that people might be motivated by something other than money appeared to be an alien concept that had not occurred to them even in their worst nightmares.