ON THE ROAD: Not bad for a ‘pub team’! Hornchurch’s dream-making heroes make hearts soar at the end of football’s longest winter in FA Trophy triumph that defied semi-pro status

They hadn’t played competitive league football since November, their home gate is no more than 400 and they were representatives of a tier that had not appeared in this final for 40 years. At the end of football’s longest winter, Hornchurch, the dream-makers, delivered something to make your heart soar.

There are too many individual stories to relate them all. Rickie Hayles, the centre half: a plasterer who kept remembering with disbelief in recent weeks that he would be in a Wembley final. Liam Nash, the striker: a builder whose previous club had been expelled from the Gibraltar league. This team came from behind in seven of the rounds to lift the trophy.

There was nothing semi-professional about their victory. Technical excellence contributed substantially to it. The physical trouble that 36-year-old striker Chris Dickson caused Hereford’s defence made you wonder why he’s drifted around 18 clubs in 17 years. 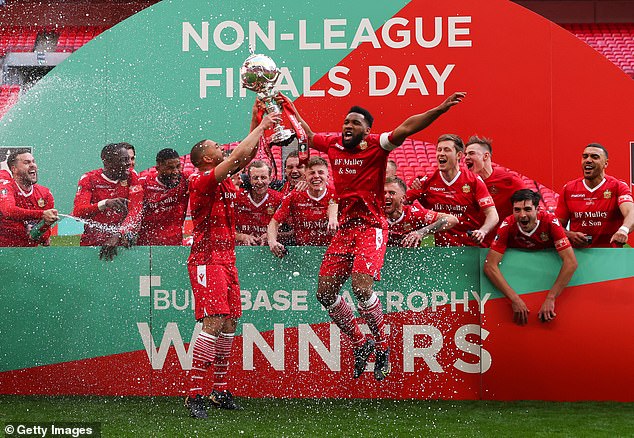 A moment of invention on the left touchline, four minutes from time, made you wonder why Charlie Ruff isn’t inside the world of full-time professional football.

Ruff just juggled the ball out there, clipping it up three times, before despatching the half-volleyed pass which Dickson nodded down for Nash to crash their team ahead.

We’re seeing out a season in which the game’s lower reaches have seemed utterly insignificant to those wealthy clubs grasping for more cash but the quality of this final – three Hornchurch goals in a devastating last 15 minutes – telegraphed the significance and merit of local, non-league football. 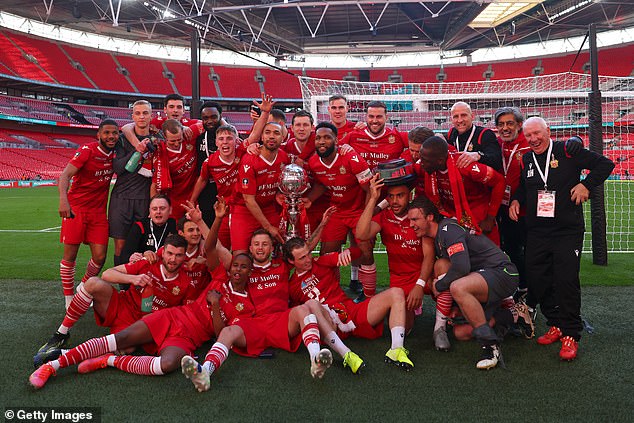 The Isthmian League, where Hornchurch ply their trade, are a lifeblood of the game, where talents like Ruff get their chance.

He had been released by Barnet for being too small and drifted around lower levels sides like Broxbourne Borough, Kings Langley and Potters Bar before Hornchurch manager Mark Stimpson, whose side had struggled with him against Hertford Town, brought him in when he ‘needed a spark’ at the start of this season.

‘The kid’s got so much magic,’ Stimpson reflected late on Saturday, making no secret of his views on Barnet’s judgement. ‘If he listens to me I think he could become a league football player.’

He would be wise to do so. As golden, late afternoon sunshine streaked the Wembley pitch, Stimpson was gesturing ‘five’ as one of his backroom staff took selfies of the two of them. That’s how often he’s won this trophy – on four occasions as a manager. 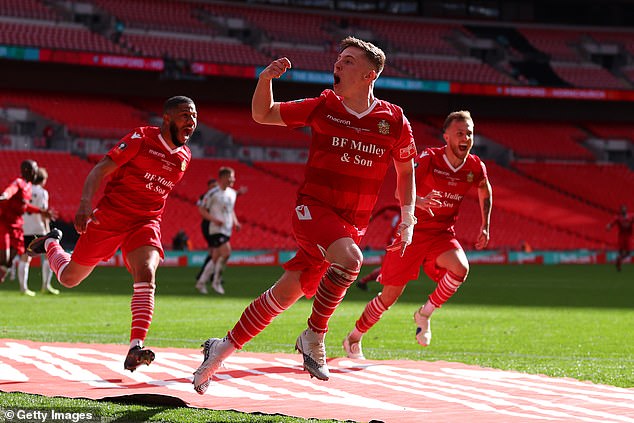 Before discussing football issues, such as how he brought on Dickson and Ruff on in a bold double-substitution around the hour mark, Stimpson wanted to thank the east London local paper for being willing to interview him and report the team. He is a throwback in so many ways.

His team were fuelled by indignation, too. Their anthem on this cup run had been ‘We’re just a pub team from Hornchurch’ – an ironic riposte to opposition fans who sang it at them at one stage.

The jubilant players chanted it after the semi-final win over Notts County, on a video clip that went viral. Many of the 3,000 Hornchurch fans walking down Wembley Way had the words woven into their Trophy Final scarves.

The sentiment was still evident at the final whistle, judging by the response that Hereford manager Josh Gowling got when he tried to congratulate Stimpson and his coaching staff. 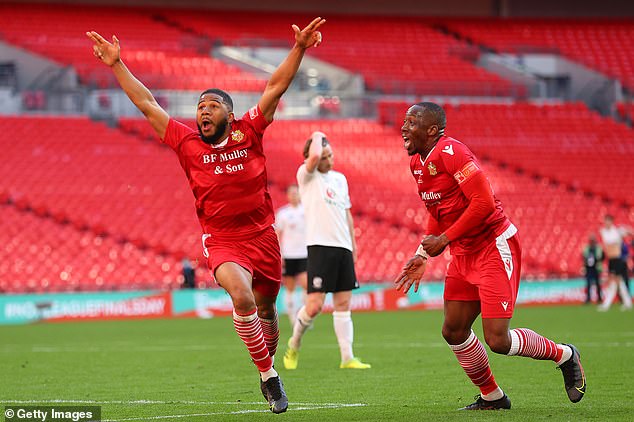 ‘They didn’t want to do that,’ related Gowling. ‘They wanted to scream and shout at us.’ It was the final’s one jarring moment, which did not reflect well on the winners because the impressive Gowling and his team had been gracious in defeat.

Gowling clearly also has an eye for talents who’ve been cast aside. His predecessor, Russell Slade, had sent young forward Tom Owen-Evans out on loan, but he quickly called him back. Owen-Evans clipped in the early deflected goal that sent Hereford ahead from one of their range of set-piece manoeuvres.

The club’s crest carries the words ‘Forever United’ beneath the legendary emblem of a bull and the first half they dominated was testament to the fact that their beloved Hereford United, liquidated six years ago, never entirely died when the phoenix club was formed. 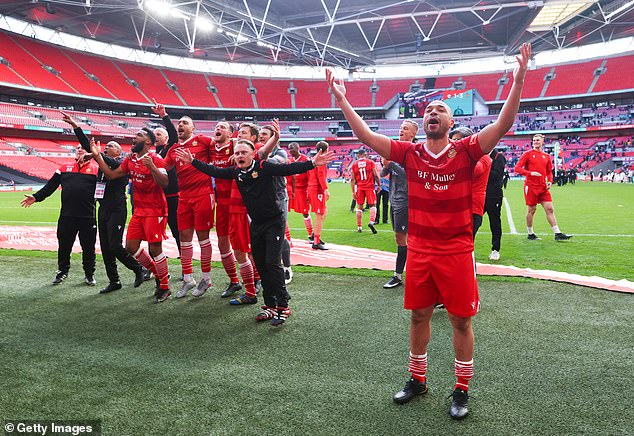 But the relentless, imaginative, indefatigable Hornchurch prevailed. A goal-line clearance was needed from Hereford captain Jared Hodgkiss as their momentum became irresistible.

Ruff scrambled an equaliser from a ball which spooled down from the top of the crossbar. Victory was sealed on the breakaway by the rapid right winger Ellis Brown.

‘There have been times over the past year when we didn’t know if we could carry on,’ Stimpson related as he took it all in. ‘We went through a period for three weeks when we couldn’t train because we weren’t classed as an elite team. But we all worked hard. We thought we had a chance in every game.’

Tags: Hornchurch&apos;s, on, Road, THE
You may also like
Latest Posts