The NSW National Premier League has largely existed in the shadows for most football fans.

Save for one-off FFA Cup fixtures for clubs against A-League opposition, the competition is largely out of sight. The 2020 season that begins on Saturday might remain as such for mainstream audiences but for A-League coaches, scouts and player agents, it will be a shop window. 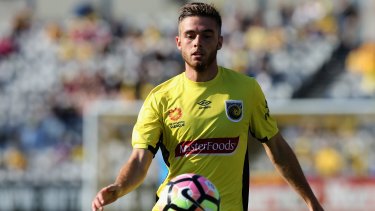 Former Mariner Liam Rose is hoping to bounce back to the A-League via the NPL NSW.Credit:Ashley Feder

Wedged either side of the 2020 season is the introduction of two A-League expansion clubs; Western United and the Campbelltown-based Macarthur FC and with their inclusion comes a 20 per cent increase in the demand for professional players. In the space of 12 months, the maximum number of contracted players in the A-League will swell from 230 to 276 which makes the strong state-based competition a prime hunting ground for players and coaches.

Never before will so many semi-professional players have the realistic chance of breaking into the A-League on the back of performances in the NPL as this season.

Already, there are players on the cusp being elevated from the state league competition to the A-League. According to competition sources, Sydney United midfielder Liam Rose is set to join Macarthur if he can regain match fitness in the NPL while United's teenage sensation, Michael Ruhs, is also on the radar of several clubs, including the Bulls. 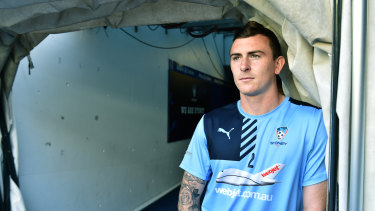 Seb Ryall is pulling on the boots on for the first time since leaving Sydney FC.Credit:Steven Siewert

Sydney Olympic have spent big this year. Former Sydney FC defender Sebastian Ryall makes his return to football with Olympic after a two-year absence for personal reasons. He'll be joined at Belmore by former A-League players; Hagi Gligor, Charles Lokolingoy, Adam Parkhouse and Fabio Ferreira who are all looking to be elevated back to the top flight.

With such a reward at stake this season, the league even has European talent hoping to catch the attention of A-League clubs. One of the most notable is Dutch defender Joey Groenbast. He joined Sutherland Sharks having made 31 appearances in the Dutch top flight with Go Ahead Eagles before signing in the NPL after a run of injuries.

Another looking to break into the A-League via the state league is Australian midfielder Gavin de Niese. The 24-year-old signed for champions APIA Leichhardt from Portuguese second tier club, Armacanense, having previously played for the youth teams and reserves of Argentine giants, River Plate.

It's not just players in focus of professional clubs but coaches too. Former Socceroo Luke Wilkshire won the premiership in his debut season with Wollongong Wolves and remains at the helm while former AC Milan goalkeeper, Zeljko Kalac, embarks on becoming a head coach, taking charge of Sydney United.