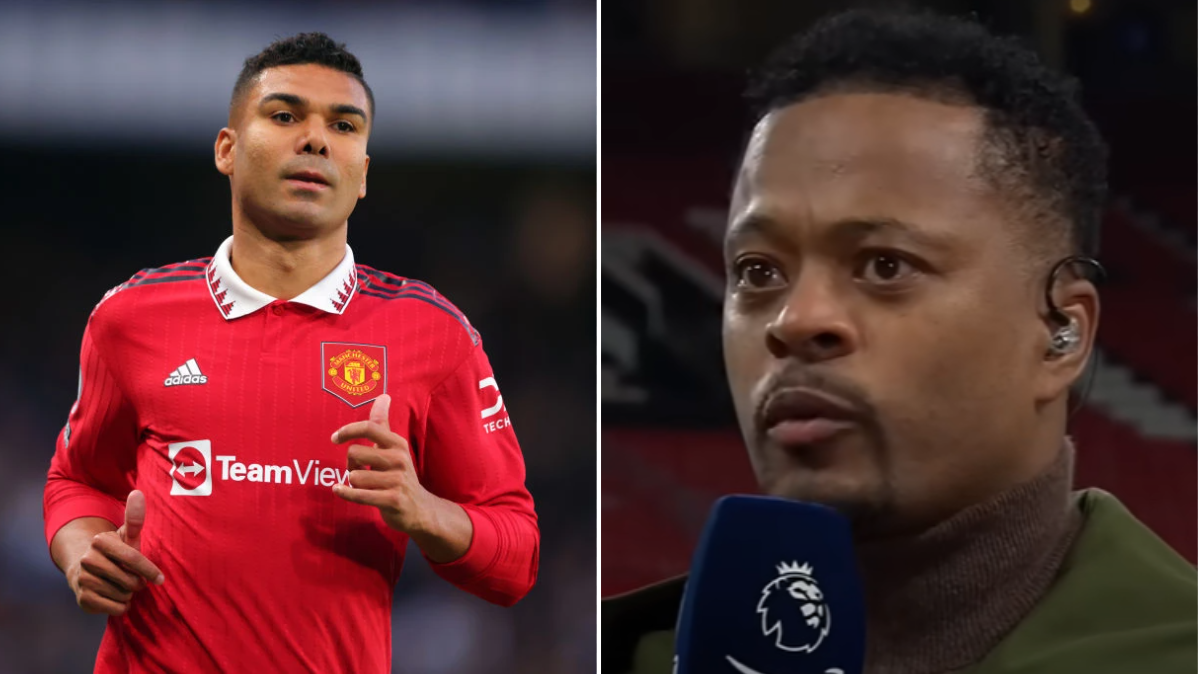 Casemiro has already established himself as the ‘main man’ at Manchester United, according to Patrice Evra, who has also ‘begged’ fans to get behind struggling Red Devils defender Harry Maguire.

The 30-year-old, who won five Champions League titles at the Bernabeu, has been a reliable presence in United’s midfield and popped up with an injury-time equaliser to deny Chelsea victory at Stamford Bridge last weekend.

Manchester United legend Evra has been impressed by Casemiro’s impact at his former club and says every player in the squad should be leaning on the Brazilian on and off the pitch.

‘I keep talking about Casemiro and for me he is the main man,’ Evra told Betfair. ‘He’s the one who is giving the team the right balance and you could see that against Tottenham.

‘We dominated, and at the time I was sure it was a trap and they would counter attack, but we dominated from the first to the last minute and a lot of that was down to Casemiro. He is the one doing the hard work and now scoring goals.

‘You could see that the goal against Chelsea meant a lot to him. I know some people said that they were celebrating like they won the game, but it’s not about that. The moment was about him enjoying everything.

‘We forget, this guy has five Champions League winners’ medals. No matter if he needs to adapt to the Premier League, he’s born ready and I’m sure he’s going to have a beautiful World Cup too.

‘He’s a leader. I remember I spoke to Darren Fletcher after his first training session and he told me that he’s already a leader in the team.

‘You could see against Southampton that they wanted to play out from the back with David de Gea, and Casemiro told them no, even though he’d only just arrived.

‘That showed me how much experience he has, and if some players don’t listen to Casemiro then they don’t understand how to play at a high level.’

Evra, who lifted five Premier League titles during his nine-year spell at Old Trafford, has also urged Manchester United fans to get behind Maguire when he returns to the side.

The 29-year-old has lost his place in both the United and England team this season but could be relied upon at domestic level as Erik ten Hag looks to cope with Raphael Varane’s injury.

Evra added: ‘Now, United have Lindelof, Maguire and it’s a big opportunity. It’s a massive opportunity for Harry Maguire. The team is doing well, and I think because of that his integration will be easier.

‘I don’t know if Ten Hag will give him back the armband because that doesn’t help Harry. When the fans and other people see him with the armband things are already negative.

‘I’ve talked to Harry, and told him to not give up and that he has to get his confidence back. This is the perfect opportunity for him to show us the player he is.

‘For me, it was disgusting to see some English fans booing him. He had an amazing Euros and every time he plays for England he’s at his highest level. This nonsense has to stop.

‘Now, if you are a true United fan, I’m begging you to give the man a chance and support him.

‘Also, Harry can’t fail. If he fails this opportunity I think he will have to leave the club. But I know he can do it and he’s going to have the full support of the manager and the players.

‘We don’t know what’s going to happen, the manager might play Lindelof instead, but even if that is the case, Harry shouldn’t give up, he should wait for his moment, it will come and when it does he needs to show us the player he is.

‘He’s had a lot of time to think and I don’t think anyone is happy when he’s on the bench. He must be angry inside, and now he needs to use that anger when he gets the opportunity to play.

‘Gareth Southgate trusts Harry Maguire, but you need to play. There’s only one week between the Premier League finishing and the World Cup starting, so, if I’m a national manager I will be looking at how many minutes players have had in their legs.

‘When I asked Ten Hag about the competition between Malacia and Luke Shaw, he told me that they both play for their country, and he has to look at that.

‘I think Ten Hag is a clever manager and he will give time to Maguire, but when he does the result has to be there. If Maguire plays and United start losing and conceding goals, he won’t play him.’